Interesting numbers from Day 2 of the Delhi Test 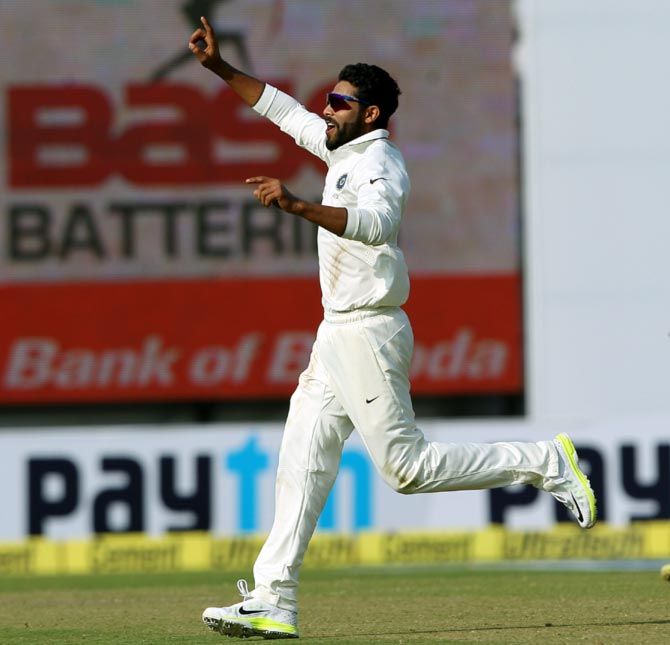 India rode on Ajinkya Rahane's cultured century to post a series-high 334 before returning to skittle out South Africa for 121 to take full control of the fourth and final Test in Delhi, on Friday.

Rahane (127) crafted the first century in the low-scoring series over five painstaking hours and also featured in a 98-run eighth-wicket stand, the highest in the series, with Ravichandran Ashwin (56).

Spinner all-rounder Ravindra Jadeja (5-30) then orchestrated South Africa's rout in glorious sunshine at the Ferozeshah Kotla stadium as the hosts thoroughly dominated the second day's play but did not enforce the follow-on.

Rediff.com presents the interesting numbers from Day 2 of the Delhi Test:

3 Number of ducks recorded by Faf du Plessis recorded in the series. Last time a top-order batsman registered three ducks in the series against India in India was Australia's Ricky Ponting in 2000-01.

3 Number of Indian players to score a half-century and take three five-wicket hauls in the same series. Before Ravichandran Ashwin in this series, Kapil Dev (vs Pakistan in 1979-80 also in 1982-83) and Irfan Pathan (vs Zimbabwe in 2005) accomplished this feat.

12 Number of consecutive innings in which India have bowled out the opposition -- six in Sri Lanka and six in this series. This is their longest sequence of getting the opposition bowled out.

60 Number of wickets taken by Ravindra Jadeja this season -- the most by any Indian bowler. His tally includes eight five-wicket hauls.

121 South Africa’s total -- the lowest for any visiting team in its first innings at Feroz Shah Kotla in Delhi.