India have a chance to hold the Proteas by the scruff of their neck with the latter seemingly at their weakest following back-to-back defeats,

IMAGE: India is blessed with a great bowling attack and captain Virat Kohli will rely on them heavily at the World Cup. Photograph: Jordan Mansfield/Getty Images

Virat Kohli will embark on the most defining journey of his international career, carrying the hopes of more than a billion when he leads India against a struggling South Africa in their World Cup opener in Southampton on Wednesday.

Kohli is one of the best batsmen of this era but this edition of the World Cup will define his legacy as a leader, an aspect on which the jury is still out despite some heady achievements in the Test arena.

The current team does have potent match-winners with the skipper himself being the biggest of them all but it still misses the aura that the 'class of 2011' under Mahendra Singh Dhoni had.

But this team, led by Kohli and mentored by Dhoni, has had its share of good results and six wins in nine games would ensure a smooth passage into the semi-finals.

Two years of investment has gone into building a potent ODI squad, something that started right after the 2017 Champions Trophy final loss against Pakistan.

The 'Men In Blue' have had adequate rest. All other teams have already played two games each and the Kohli-led team would want to kick-start their campaign with a commanding performance. The first match in a tournament of such a vast magnitude is always important and South Africa's confidence will be at its lowest following back-to-back defeats against England and Bangladesh.

To make matters worse, fast bowler Lungi Ngidi is out with a hamstring strain and Hashim Amla got a nasty hit on the helmet off Jofra Archer's short ball against England in the opening game.

Senior speedster Dale Steyn has been ruled out of the tournament due to a shoulder injury and has been replaced by left-arm seamer Beuran Hendricks.

India have a chance to hold the Proteas by the scruff of their neck with the latter seemingly at their weakest.

However, a cornered opponent is always a dangerous proposition and head coach Ravi Shastri, a shrewd tactician by all means, will be surely making the players aware of the consequences of taking their foot off the pedal.

The pitch at the Ageas Bowl stadium in Southampton, devoid of grass cover, is expected to be a batting-friendly but Kohli will have a few points to ponder upon as the weather forecast on match day indicates cloud cover with intermittent showers.

Will a third seamer in Bhuvneshwar Kumar come into the picture? Does Ravindra Jadeja's form in the warm-up matches get more credence than Kuldeep Yadav-Yuzvendra Chahal's 22-month show in tandem? Does Kedar Jadhav fit in without playing a single game for a month or Vijay Shankar gets a look in? These are some of the pressing questions that skipper Kohli needs to address going into the first game.

There's no doubt that the Proteas are badly hit by poor form and injuries but it may just take one fiery spell from Kagiso Rabada to straighten things up.

A bit of help from the weather conditions with his scorching pace and ability to move the ball, Rabada could just unsettle the opening pair of Rohit Sharma and Shikhar Dhawan, who haven't had the best of times during the past few months.

Both are capable of turning the match on its head but they could be short on confidence due to lack of runs since the start of the away ODIs against Australia.

Rohit's apparent weakness against leg-spinners could be exploited by rival captain Faf du Plessis, who can again think of giving the new ball to Imran Tahir.

KL Rahul is expected to take the No. 4 slot but it needs to be seen as to how well he performs when the conditions are nippy. Dhoni at No 5 will be the stabilising factor and if he bats like the Bangladesh warm-up game, he can be a nightmare for the Proteas attack.

But what will be a bigger worry for Du Plessis will be the batting where AB de Villiers' absence has surely had an impact.

The poor technique of Proteas batsmen against slow bowlers have been time and again exposed and 20 overs of quality spin bowling could be too hot to handle for the South Africans.

In all, it's advantage India at Southampton. 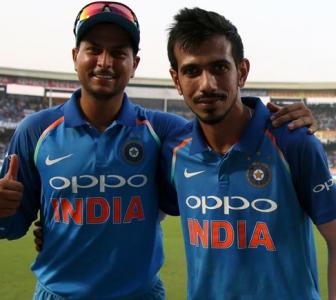 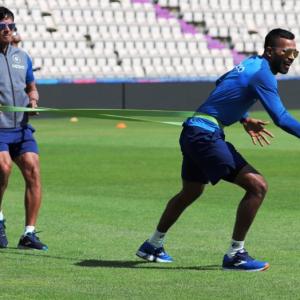