'I don't think we need to do anything different against Bangladesh and also moving forward, we would like to measure ourselves with what we want to achieve and how we can achieve those goals. And as long as we do that and continue to keep winning those moments and performances within our group, then I think the results will go our way'

'This squad certainly has the ability to pick up 20 wickets' India will look to build on a highly successful home season when they clash with Bangladesh in the one-off Test on Thursday, says head coach Anil Kumble even as he emphasised on his side's ability to take 20 wickets.

"We would like to look at it as continuation from where we left against England. It's been a good home season so far. We would like to take confidence from that and build on it. We still have few more Test matches after this so, it's important that we take momentum and look at Bangladesh, which has done really well against New Zealand in the recent past," Kumble said at a press conference in Hyderabad on Tuesday.

"I don't think we need to do anything different against Bangladesh and also moving forward, we would like to measure ourselves with what we want to achieve and how we can achieve those goals. And as long as we do that and continue to keep winning those moments and performances within our group, then I think the results will go our way," he said.

Talking about Bangladesh, Kumble said: "It's a very improved side. They had a good outing in New Zealand although the results are different. We certainly respect the opposition. Bangladesh has some quality players, good all-rounders. So, it's going to be an interesting contest," he added. The former captain noted the contribution made by the fast bowlers in India's success in the home season and team's ability to bowl out opposition twice.

"You spoke about spinners dominating against England, but then fast bowlers' contribution you cannot take that away at all, whether it was England or New Zealand. So, the home series has seen the fast bowlers coming in and contributing as well. It's a matter of getting the partnership right whether it is fast bowlers or spinners. At the end of it, this squad certainly has the ability to pick up 20 wickets," Kumble said.

Kumble said the team will approach the Bangladesh game session by session.

Kumble said the opening slot was not a grave concern and call to Tamil Nadu batsman Abhinav Mukund was a back-up plan.

"Murali Vijay and KL Rahul played wonderfully in the last series. It's just that we need a back-up opener just in case something happens on the day of the match. As far as we are concerned, the openers always had some issues in the last home series or leading up to the home series as well. 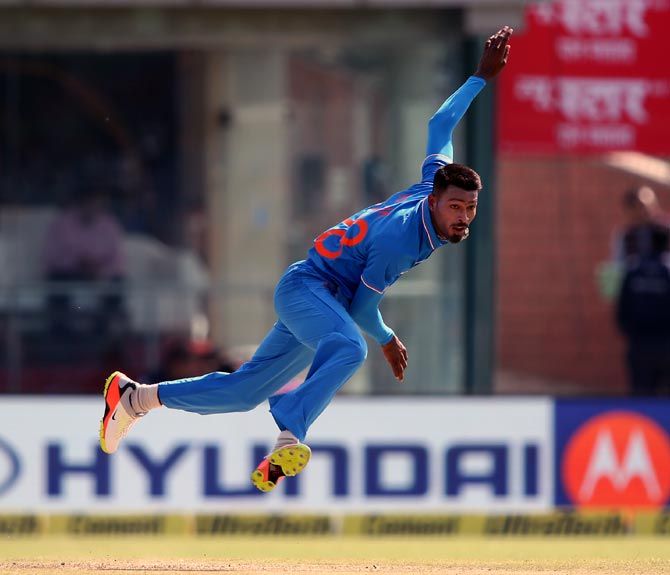 Speaking about batting positions, Kumble said: "It's nice that Karun(Nair) took his opportunity and did what he did in Chennai. Fantastic for a young cricketer to come in and score a triple hundred. But, we all know what Ajinkya has done for this team, for India. So, his performances have been phenomenal across conditions. So, we still have not figured out what the combinations. We will take a look tomorrow and then decide," he said.

Kumble though gave enough hints that promising all-rounder Hardik Pandya will be drafted into the side.

"I think we certainly want to keep Hardik in the mix. Because, he is someone who has the ability to become a good all-rounder even in the longer format. That's one of the reasons that we pushed Hardik. IMAGE: Kumble is 'extremely pleased' with the performances of Ravindra Jadeja and R Ashwin. Photograph: BCCI

“It's very rare that someone can run in and bowl close to 140kmph and then bat in middle order, lower middle order. That's the ability Hardik brings in.

Yes, he is not really tested in the longer format. But, we certainly believe that if he is a part of the this mix and whenever the opportunity comes, we will try him out and in the future, when we travel outside of India," he said.

He also spoke highly of R Ashwin and Ravindra Jadeja.

"I was extremely pleased with Jadeja's performance in Chennai where he varied pace and bowled much slower than what he is used to. He picked up wickets on a very good surface. People tend to look at the surface and then give not too much credit to the spinners especially when spinners perform in India. But, at the end of it, it's the ability of the bowlers to pick up 20 wickets and Ashwin is a proven world-class bowler and to support him and also as a combination they have done well," he said.