Yusuf Pathan threatened to single-handedly pull off a sensational victory with a brutal 70-ball 105 before India suffered a heart-breaking 33-run defeat against South Africa in a thrilling fifth and final One-day International to lose the series 2-3 in Centurion on Sunday.

Yusuf, who came out in the 14th over when India were tottering at 74 for six, hit eight stunning sixes and as many fours to raise visions of a historic series-clinching win for India only to fail short at the end.

Chasing a target of 268 for a win under Duckworth-Lewis Rule after the match was curtailed to a 46-over-a-side affair due to a rain interruption, India were shot out for 234 in 40.2 overs at SuperSport Park here.

With the loss, India failed to realise their dreams of recording first ever ODI series win on South African soil besides ending the nearly one-and-a-half month tour on a losing note. The three-match Test series before the one-dayers had ended in a 1-1 draw.

Put into bat, South Africa scored 250 for nine in 46 overs with in-form Hashim Amla contributing a brilliant unbeaten 116 but India had to chase 268 after adjustments were made under the D/L method.

Indian top order batsmen were on the self-destruct mode as they fell like a pack of cards with most of them being dismissed while playing rash shots when put under pressure by a disciplined South African bowlers.

By the 12th over, half of the Indian batsmen have gone back to the hut with just 60 runs on board and at that stage it looked like India would be shot out below 100.

Yusuf made a sensational rearguard action with his second ODI century, which he hit from 68 balls, but the dice had already been loaded too much in favour of South Africa.

He was the ninth batsman out after taking India closer to the target from a hopeless situation. At one stage, it looked like he will take India to victory just like he did against New Zealand in Bangalore last month when he hit an unbeaten 123 to win the ODI for India.

Zaheer batted sensibly to give company to Yusuf. He shared 100 runs with Yusuf from just 12.4 overs for the ninth wicket and he was the last man out for a 58-ball 24. 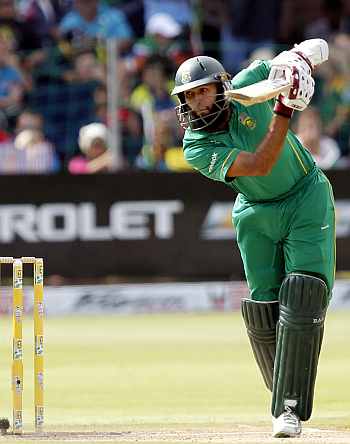 Opener Parthiv Patel was the other main contributor for India with a quickfire 34-ball 38 with the help of six fours.

Suresh Raina made 11 and he was the only other recognized Indian batsman who scored in double digits.

Rohit Sharma (5) was the first to go for an eight-ball five as he played an expansive cover drive without moving his feet to drag Lonwabo Tsotsobe delivery to the stumps in the fourth over and end the series on a disappointing note.

Virat Kohli, the highest run getter among Indians in the series with two half centuries in his name, struggled in his short stay and was out cheaply for two after facing six balls.

Kohli fell to a Morne Morkel fast stuff, which rose sharply from outside off as he played the shot early and the edge went straight to wicketkeeper AB de Villiers.

Parthiv, on the other hand, seemed to be unaffected by the fall of wickets at the other end and he smacked all the three South African fast bowlers for boundaries.

Captain Mahendra Singh Dhoni (5) promoted himself up the order and came out after Kohli's dismissal but the move did not pay any dividends as he was out cheaply while trying to play a cut shot off Morkel only to find Graeme Smith at slips.

Patel was a bit unlucky to have been given out as the television replays seemed to be inconclusive whether Faf du Plessis had taken the catch cleanly at the covers off Morkel.

India were reeling at 60 for four in the 11th over then.

Six balls later, Yuvraj Singh (8 off 14 balls) was out at the same score while playing an iresponsible shot. The left-hander, who has been struggling for form, played a half-hearted shot towards straight the point region for JP Duminy to take an easy catch.

Raina could not survive long and it was only due to Yusuf and Harbhajan that India went past the 100-run mark. Yusuf smacked Robin Peterson for a four and a six in the same over though the battle has already been lost.

Harbhajan also hit Peterson for a six before he fell to Johan Botha for a 16-ball 13.

For South Africa, Morne Morkel was the most successful bowler with figures of 3/31 while his fast bowling partner took two Indian wickets.

Earlier, India made a stunning comeback after a rain break to take six wickets for only 24 runs as they restrict South Africa to 250 for nine in 46 overs.

The momentum at which the Proteas were scoring after they were put into bat was hit badly due to the untimely break due to rain in the 42nd over.

Amla once again proved to be India's nemesis as he scored another century to guide South Africa to a decent total at the Supersport Park.

The Indian pace duo of Munaf Patel (3/50) and Zaheer Khan (2/47) regrouped well to bowl an immaculate line at the death after the match was reduced to a 46-over-a-side affair due to a rain interruption.

From 226 for three in 42 overs at the rain break, South Africa lost six wickets to end their innings at 250 for nine.

It was Amla's seventh ODI century in his 42nd appearance. Interestingly, Amla started the Test series before the one-dayers with a century and has now finished the ODI series with a three figure mark -- both at the same venue.

Amla's century came off 113 deliveries with nine boundaries. The highlight of his innings was the number of singles and twos he ran.

The only glitch in an otherwise flawless innings was the reprieve he got when he was batting on 70. Amla hit a pull shot as part-time off-spinner Rohit dropped one short. The catch that flew towards square leg was dropped by 12th man Ravichandran Ashwin.

The foundation of the South African innings were the two solid partnership --- the first one being a 97-run stand between Amla and Morne Van Wyk (56 from 63 balls) who put on 97 runs for the second wicket in 19.5 overs.

The second one was between Amla and Jean-Paul Duminy (35 from 44 balls) who added 102 for the fourth wicket before Duminy perished trying to hit Munaf Patel over mid-wicket.

Earlier, Dhoni elected to field on a wicket which didn't have much for the seamers. Piyush Chawla was drafted in the playing XI in place of Ashish Nehra.

The choice was understandable considering this will be the only chance when the team management were able to have a good look at Chawla ahead of the World Cup.

The Indians started off well with senior pro Zaheer again getting his 'bunny' Graeme Smith (7) as the Proteas captain fished at a delivery outside the off-stump and was smartly caught by Yusuf Pathan stationed at second slip.

But number three batsman Van Wyk provided good support to Amla who punished the loose deliveries but at the same time ran the singles and twos well.

With the surface being on the slower side, Dhoni used six slow bowlers. Chawla, who has been a surprise inclusion in the World Cup squad, didn't impress. He wasn't exactly taken to the cleaners by Amla-Van Wyk pair, but the leggie could do precious little to stop the singles which the South African duo got easily.

Apart from Yuvraj (2/45), who again impressed with his slow left-arm orthodox bowling, none of the other slow bowlers were able to make any impact. Amla in particular ensured that the run rate never dropped below five per over mark.

It was a brilliant reflex catch by Yuvraj that saw the end of Van Wyk just after he had scored his third half century in ODIs.

Yuvraj also foxed AB de Villiers (11) with a ball that spun sufficiently to beat the batsman's willow as keeper Dhoni whipped the bails in a flash. From 113 for one, the hosts were 129 for three in no time.

However, Amla and Duminy averted any further danger although the latter survived a confident leg before appeal from an arm-ball bowled by Yuvraj. The television replays showed that the ball would have gone on to hit the leg-middle.