'A lot of strengths in their fast bowling and spin department.' 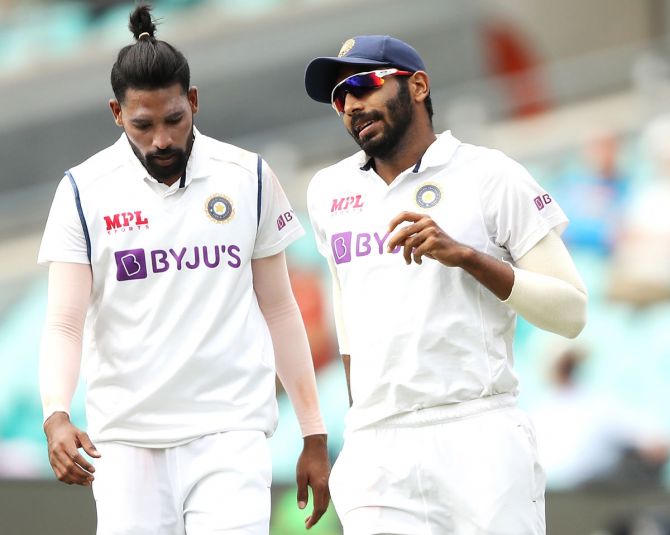 New Zealand skipper Kane Williamson said he is looking forward to the challenge of taking on India's 'fantastic bowling' in the ICC World Test Championship final in Southampton.

Williamson pointed out that India have a lot of strengths in both their pace and spin departments, which they showed during their triumph in Australia earlier this year.

In an interview ahead of the inaugural ICC World Test Championship final, Williamson also spoke on his rivarly with his opposite number Virat Kohli, against whom he has enjoyed numerous contests in his career starting from the Under-19 days.

Firstly, we are sitting here in Ageas Bowl, so I suppose it is a fitting place to ask you about the World Test Championship Final. What is it like to be here knowing that in a few weeks' time you will be playing a final against India?

Yeah, the two Tests against England before the WTC final are important matches and ones the guys are looking forward to. But naturally, there is a carrot at the end that has taken a long time to, I suppose, to accumulate points and have the opportunity to be involved in it. To get that chance is exciting and the guys know it.

You know it's sort of the third Test match of the mini-series I suppose, and they are really excited to be involved.

You were talking about Test Cricket as the pinnacle, as the first time to have a World Test Final. What would winning the World Test Championship mean to the New Zealand Cricket team?

Oh yeah, it is something new and different. They have looked to bring about more context to the Test format and I think we saw it at the end of the competition, teams trying to push their case for qualifying which made way for a lot of exciting results. We saw in Australia, in New Zealand, a lot of teams had a chance to get through.

I thought it proved to be great adding that context and for us to see ourselves in the position we are in the finals now. It is exciting. We are looking forward to that when we are taking on the top-rank side in the world. We know how strong they are and the depth they have. So exciting to be playing against each other at a neutral venue.

Two test nations that have put a lot of emphasis on Test cricket, do you think the World Test Championship format has helped ensure the longevity of Test cricket or you hope it does with the added context to help keep the relevance.

Yeah, that is obviously the idea behind the tournament structure of Test championship and added points and these sorts of things to entice and improve the brand of the game and I think when it came to the crunch time, you could see the equation of what they had to do to be involved in the final. You saw sides play that way which is what they are after.

Hopefully, that has generated a lot of interest from the public and enjoyment of the Test game, which is obviously what cricketers are involved in.

It is the pinnacle and I certainly enjoy playing it. It has added a good element to the Test format. 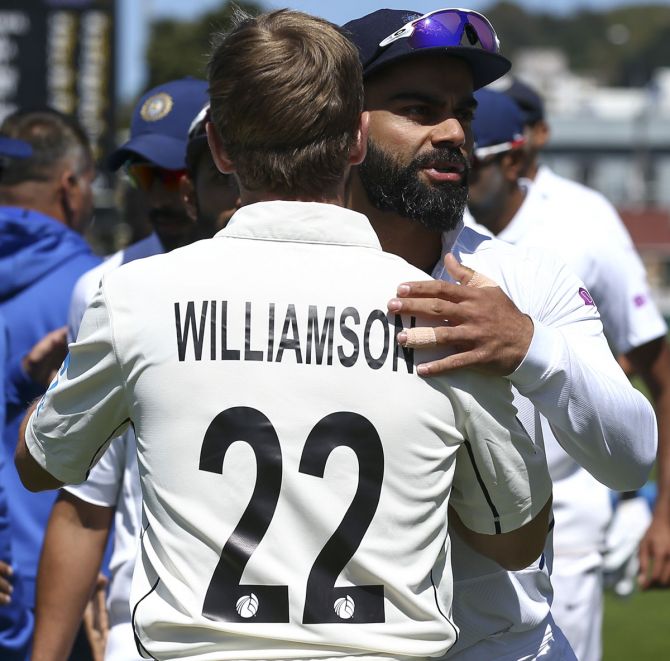 Your opposition captain Virat Kohli has always had a bit of chat about you and him. You've obviously played against each other in the Under-19s and you have captained against each other many times. How much do you guys look forward to that conspicuous rivalry on the big stage?

Yeah, hard case. Over the years, we have played against each other in so many different levels and competitions and have known each other fairly well. So, it will be quite cool walking out there, doing the toss and having a bit of contact in the first Test Championship Final.

There was a question there around Brendon Mccullum and a lot of people charted the growth of the New Zealand cricket team from when they were not at the top of the table and contest from there. Can you reflect a bit on the journey of the team and perhaps Baz’s influence on those early days, how would that go?

Obviously, Baz (McCullum) and Mike Hesson took over and gave the team a strong direction that was huge in creating a much-improved environment. Nothing promises results but you know we did see a lot of areas of the game, the style with which we tried to play the game changed, and certainly changed for the better. He and Mike must take a lot of credit for that. Obviously, it was a while ago when the transition started but he is a fantastic leader and did an amazing job with our side.

You have been out here for the first time, looking at the ground can you assess what you might face come June 18 out here.

Mow it a bit, give it a roll maybe!

I do not know the team yet, let us see what the conditions are. What we have seen so far is pretty much rain, every day. It is nice to be outside to be honest, just getting some experience facing the duke in different conditions.

What about the venue in general, looks spectacular and get a few fans in as well?

That is right. That is exciting, nice to have some fans. Yeah, fantastic ground, great venue and in my personal experience I have played a few games but no red ball games but an amazing atmosphere everywhere in this country.

I suppose given the 2020 pandemic, from both sides this is a bit of a celebration, a final, might be some fans here as well. Something to celebrate with people?

Every country is a bit different with their timelines and how they have dealt with different things. In a large country like England, you can see that the public is able to see the light at the end of the tunnel so to speak and I am sure they will be very enthusiastic to get to sporting events.

So hopefully it brings a pretty cool atmosphere. And whenever you play India, there is a good atmosphere, and it is usually geared towards them, but it is pretty good fun.

What it has been like or what will it be like operating in the team environment with different protocols on team travel these days. How does that manifest itself with the team training and preparing for Test Cricket?

Yeah, I mean it is the bubble life, I guess. For some guys it is the first time, some have been before. I mean it is just the differences, rules, and governments. All have different ideas on things, sort of follow the protocols best you can and try to make sure you are as safe as you can be and so the events can go ahead.

Specific question here on the No. 7 role, New Zealand have in the past at their home played around with, whether it is going with an all-rounder with pace or spin as well, how much is that a question mark or something you have to check with Steady about and consider around here as well?

Yeah, I guess we will have to assess conditions and make those decisions. That is obviously what we try and do every time, whenever we get to a different venue and work out what might suit us. Cards are on the table, I guess. 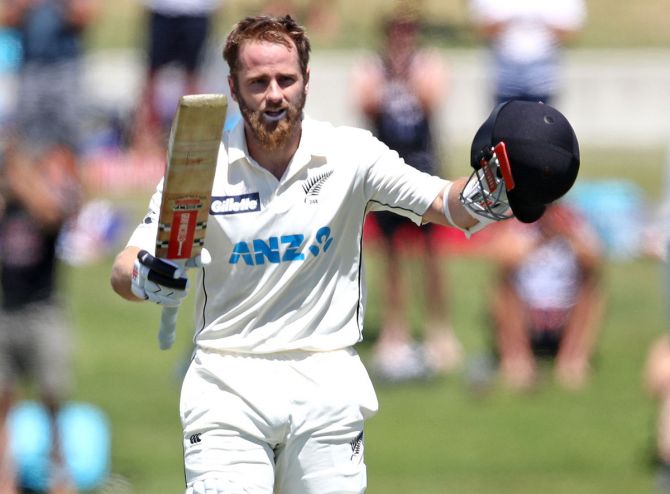 IMAGE: Kane Williamson celebrates his century during the first Test against Pakistan in Tauranga, on December 27, 2020. Photograph: Phil Walter/Getty Images

Quick comment on the Indian bowling attack you will face, obviously you have seen a bit of them when they came over to New Zealand two summers ago.

Yeah, they have got a fantastic attack. Brilliant, obviously a brilliant side. Throughout we have seen the depth they have as well, certainly saw that in Australia as well.

A lot of strengths in their fast bowling and spin department. So yeah, a brilliant side, ranked right up the top, which is fair enough and an exciting opportunity for us to be involved in the final taking on the best.

You might be asked a couple of times, but the ICC Cricket World Cup 2019 final was over here which went down to the wire and the team got picked on the boundary count, does this have any relevance to this match do you think?

No, I do not think so, certainly not something that the guys have spoken about. I guess being a different side really with a different format as well. The focus is definitely on the transition from not playing much cricket or from where the guys who have played white ball cricket to just change into that Test format but hopefully there is still a great atmosphere for that game.

The match you mentioned was a very memorable one and obviously it had some controversy and it had everything, and people loved watching it, at the end of the day. That is why people got a lot out of it. Hopefully, it is a great spectacle, and we get a decent crowd, and it is a really good game!

Last question, this one is about Neil Wagner, given the bowling attack performed so well with Boult, Southee and the addition of Jamieson, wanted to know the role of Wagner, the sort of role he is fitted into over the last two seasons and what you put his success down to?

Yeah, he has been a pivotal part of our team for a number of years and his role is unique and certainly different from the other bowlers.

His ability to bowl long spells and keep applying pressure for long periods of time has been something that has made him so successful at the international level. He is a big member of our side and a big character in our team. It is always great to have him along. 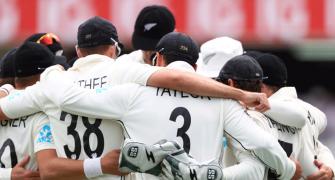 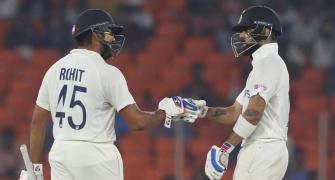 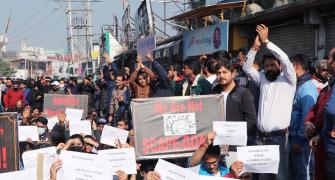 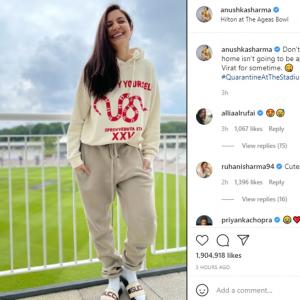 Hussain criticises England for not going for win