It was a mixed day for Australia in the second Test. Pacer Josh Hazlewood picked five wickets on debut before Umesh Yadav had them in a spot of bother.

Captain Steven Smith led Australia's fightback, stitching meaningful partnerships -- first with Chris Rogers and later with Shaun Marsh – to take the side to 221 for 4 at close of play on Day 2.

Check out some photos from the day's play at the Gabba. 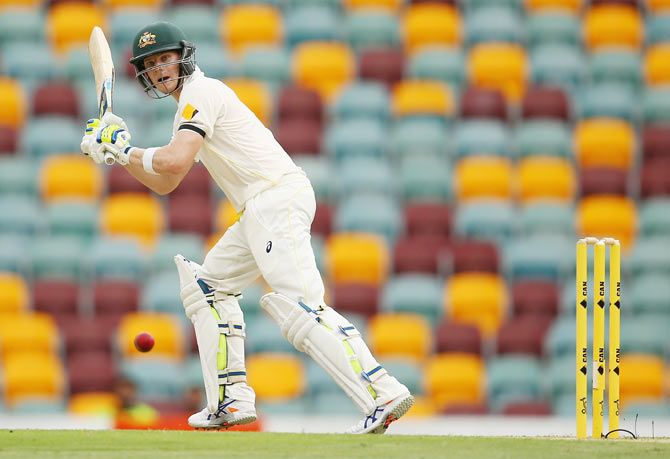 Steve Smith of Australia bats on Day 2 of the second Test against India at The Gabba in Brisbane on Thursday. Photograph: Cameron Spencer/Getty Images

Captain Steven Smith (65 not out) and Shaun Marsh (32) fought back in the third session, after Australia lost early wickets, to end Day 2 in the second Test at the Gabba in Brisbane on 221 for 4.

Smith and Mitchell Marsh (7) were at the crease when bad light and overcast conditions forced an early close of play on a mixed day for the hosts.

While Umesh Yadav gave India the upper hand, picking three of the four wickets to fall, Smith and Marsh brought stability to the Aussie innings, scoring when opportunity arose and hitting the bad balls to the boundary. 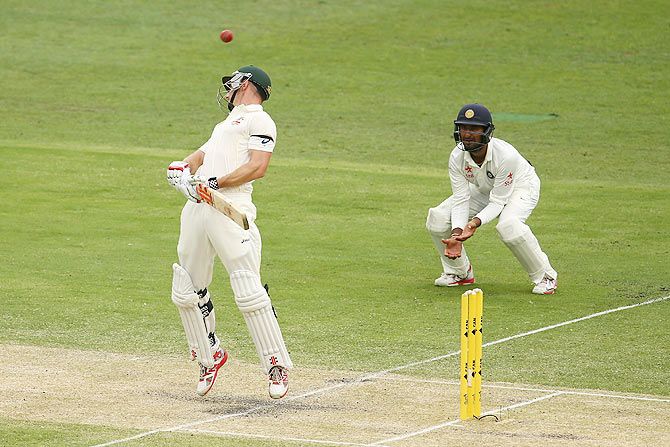 When the boundaries dried up, both Smith and Marsh looked for singles and the odd three across the huge outfield.

As the innings progressed the duo looked more and more comfortable at the crease.

Ajinkya Rahane dropped Marsh on 32, but Yadav struck to stop what could have developed into a dangerous partnership.

Yadav had Marsh for 32, Ashwin plucking a superb catch at second slip. 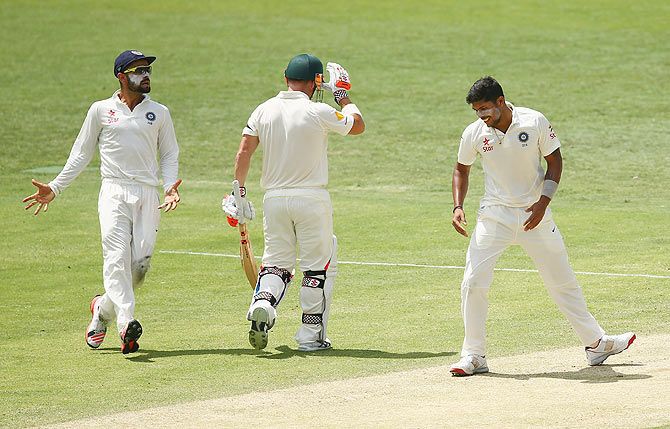 Earlier, Yadav helped India peg back the Australians in their reply to India’s first innings score of 408 all out.

Playing his first Test since 2012, he grabbed two wickets as the hosts were left reeling at 121 for three at tea.

Openers David Warner (29 off 28) and Chris Rogers gave the Aussies a good start, batting at nearly five runs per over, before Yadav struck in the ninth over, having Warner caught by Ravichandran Ashwin at slips. 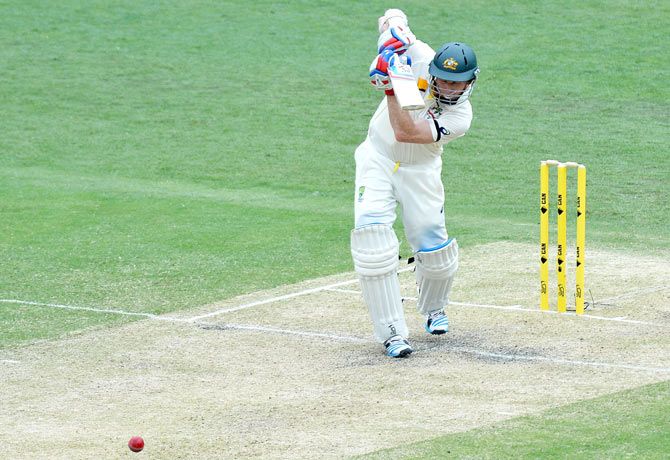 Chris Rogers of Australia drives the ball to the boundary for a four. Photograph: Bradley Kanaris/Getty Images

Australia’s No 3 batsman Shane Watson played confidently in his shot stay at the crease before stepping out and looking to loft one over the top only to give Ashwin his first wicket of the match.

He threw away another good start and that put the Aussies under a bit of pressure.

Rogers played a solid knock of 55, finding the boundaries and working hard for the ones and twos. 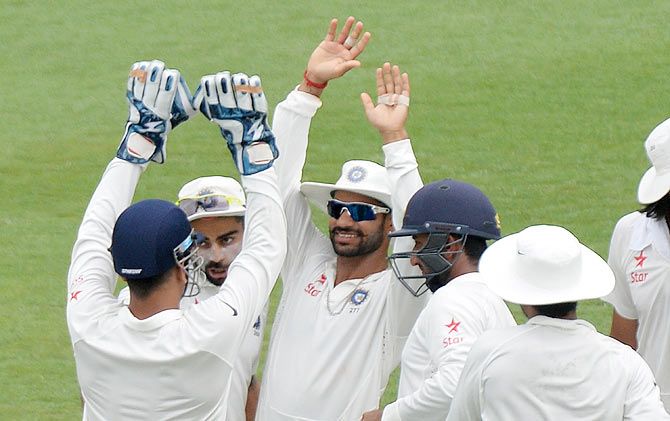 Rogers took two boundaries off Varun Aaron in the 21st over and in the next completed his half-century by cutting an Ashwin delivery for a four.

Captain Smith began his innings confidently with a four off Aaron and went from strength to strength.

It looked like a good partnership was building until Rogers was felled by Yadav, caught behind by Mahendra Singh Dhoni at the stroke of tea. Paceman Josh Hazlewood recorded figures of 5 for 68 on debut to help dismiss India for 408.

He became the 33rd Australian to take a five-wicket haul on Test debut when he dismissed Dhoni.

He picked three wickets in the morning session on Thursday, as the visitors lost their last six wickets for just 97 runs, bowled out in 109.4 overs.

The debutant first had Rahane, in only the third over of the day, with a beauty of an out-swinger. Rahane was struck at the crease and only managed to edge it to wicketkeeper Brad Haddin, who registered his fifth catch of the innings. 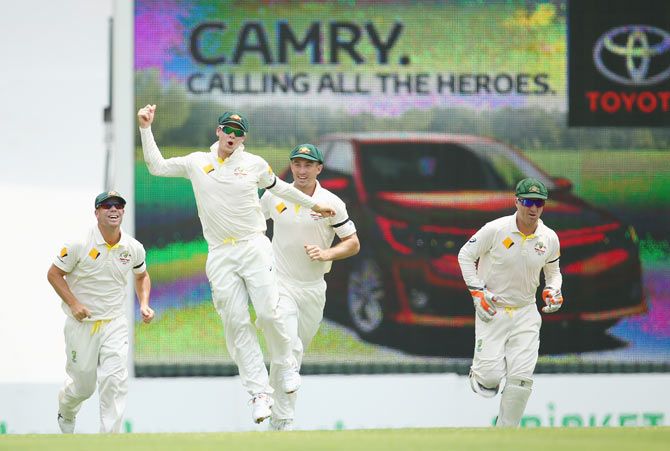 Rahane's dismissal brought skipper Dhoni (33) to the crease but despite Rohit being set at the other end, runs dried up.

Watson (1-39) then removed Rohit in the 92nd over, Smith holding on to a beautiful catch at second slip, diving low to his right. 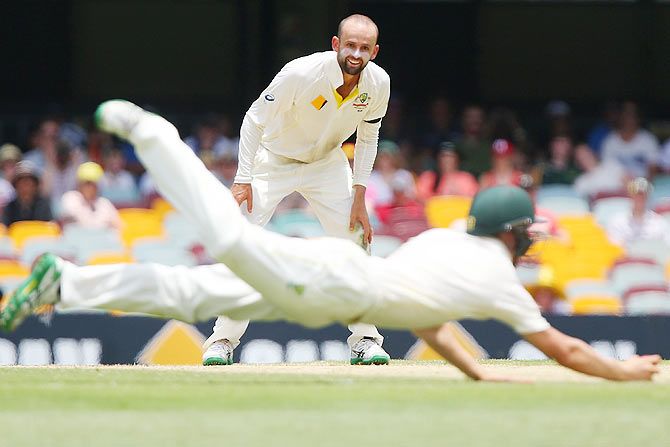 Hazlewood then broke the 57-run partnership between all-rounder Ashwin (35) and Dhoni (33), triggering an Indian collapse as the tourists lost their last four wickets for the addition of just 23 runs.

Ashwin played with his usual comfort and solidity, but he received a good outgoing delivery from the debutant bowler and only ended up edging it behind to Watson at first slip.

Two overs later, Hazlewood removed Dhoni as well, the batsman looking to leave an in-swinging ball only to edge it to Haddin. 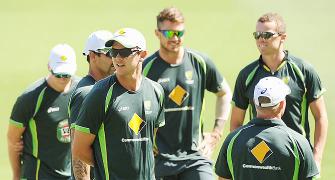 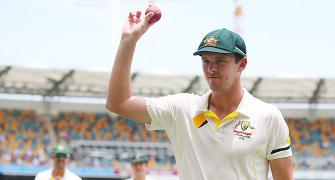 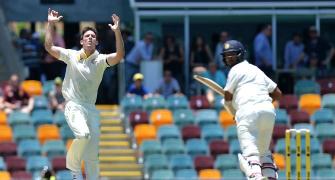 'Injured Marsh unlikely to bowl again in the Test' 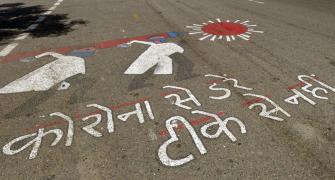 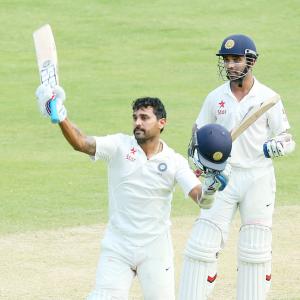