Australia clinched a stunning 48-run victory over India in the first Test at the Adelaide Oval after Virat Kohli's fighting century on Day 5. Off-spinner Nathan Lyon bowled a match-winning spell after tea, claiming seven wickets, as India were bowled out for 315.

Here are some images from the day's action. Nathan Lyon celebrates after dismissing Ishant Sharma on Day 5 of the first Test at the Adelaide Oval on Saturday. Photograph: Scott Barbour/Getty Images

Off-spinner Nathan Lyon claimed seven wickets (7-152) as Australia beat India by 48 runs in the first Test at the Adelaide Oval on Saturday.

Lyon scripted the home side's revival in the third session, scalping all his wickets after tea.

After declaring their innings at the overnight score of 290 for 5, they dismissed India, chasing 364 for victory, for 315. India's stand-in captain Virat Kohli’s (141) fighting century went in vain as the middle and lower-order batsmen failed to fire and collapsed like a deck of cards.

Opener Murali Vijay (99) was the only batsman who batted commendably and along with Kohli put on a substantial partnership. Earlier, in the morning session, Shikhar Dhawan (9) and Vijay took guard as India chased victory on the fifth day.

But Dhawan’s stay at the crease was cut short because of a dubious decision. He was wrongly given out in the fifth over as a short delivery from Johnson struck his shoulder on its way to the 'keeper.

At the other end, Vijay was lucky to have survived a close LBW decision off Lyon.

Number 3 batsman Cheteshwar Pujara (21 runs off 38 balls) looked uncomfortable against Lyon, and became the spinner’s first victim of the day when he was caught behind by Brad Haddin. Then began the long fight for victory, with Kohli and Vijay playing gamely. The two batsmen brought up the 100-run mark in the 31st over.

Vijay gave the Aussies one chance before the tea-break, but Mitchell Marsh failed to latch on to a catch off Johnson.

The batsman was on 85 then but closed up again to avoid any more danger before the final session, bringing up the 200-run mark in the 60th over. Australia suffered a setback a little before that when captain Michael Clarke limped off the field.

The captain suffered a hamstring strain after reaching down to field a ball in the second session.

Clarke, who was also battling back spasms, went down in the 44th over of India's second innings, clutching his right hamstring. He was taken to hospital for scans after that and walked with a limp after returning to the ground. Virat Kohli and Murali Vijay run between the wickets as bowler Ryan Harris takes a tumble on the follow through to his run-up. Photograph: Scott Barbour/Getty Images

The last session began with Kohli and Vijay raising visions of an Indian win. They carried on from where they left off before the break, attacking the Lyon and playing cautiously against the pacers.

While Kohli kept the scoreboard ticking, Vijay played with thought. They got the momentum India’s way as the overs progressed. In the 69th over of the innings, Kohli reached his eighth Test hundred off 135 balls.

More celebrations were anticipated in the next over as Vijay was a solitary run away from an immaculate and richly-deserved hundred; but it was not to be. He went for a back-foot flick but missed the ball completely and was out LBW. That opened the floodgates as India lost their last eight wickets for 73 runs. Ajinkya Rahane (0) was given out wrongly, caught at short leg; replays showed there was no bat involved.

Rohit Sharma (6) looked clumsy and after playing a few sweep shots against Lyon was caught brilliantly at backward short leg by David Warner as the ball looped off his glove.

Wriddhiman Saha (13) hit a couple of lusty blows but went too far against Lyon, as one turned in sharply from the rough, and was bowled through the gate. Thereafter, Kohli tried to shoulder the innings and get India across the finish line, but even as Australia delayed the new ball, he went after Lyon for a big hit and was caught in the deep, not believing for some time that he was dismissed.

Mohammad Shami (5), Ishant Sharma (1) and Varun Aaron (1) had no answers to the hosts' push for victory thereafter and folded up without much fight. 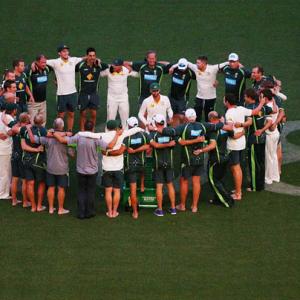 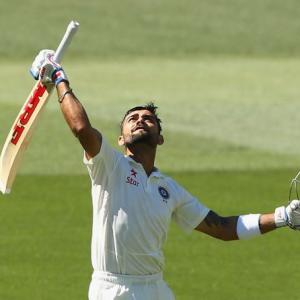