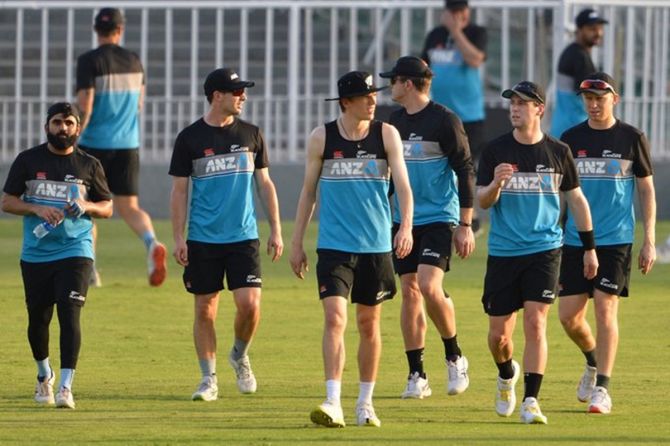 IMAGE: New Zealand’s players during a training session ahead of the scheduled first ODI against Pakistan, in Rawalpindi, on Thursday. Photograph: Blackcaps/Twitter

New Zealand abandoned their limited-overs series in Pakistan on Friday after receiving a security alert, with the tourists "unilaterally suspending" all their scheduled matches.

The following are the reactions to the tour being abandoned:

"PCB is willing to continue the scheduled matches. However, cricket lovers in Pakistan and around the world will be disappointed by this last minute withdrawal."

"I understand this will be a blow for the PCB, who have been wonderful hosts, but player safety is paramount and we believe this is the only responsible option."

"Crazy day it has been! Feel so sorry for the fans and our players," Raja wrote on Twitter.

"Walking out of the tour by taking a unilateral approach on a security threat is very frustrating. Especially when it's not shared! Which world is NZ living in? NZ will hear us at ICC."

"When I spoke with the Prime Minister of Pakistan I conveyed our thanks for taking care of the New Zealand Cricket team," Ardern said in a statement sent to Reuters.

"I know how disappointing it will be for everyone that the game hasn't gone ahead, but we totally support the decision that's been made. Player safety has to be paramount."

"Following points for New Zealand to remember: 9 Pakistanis were killed in the Christchurch attack. Pakistan stood strong with New Zealand. Pakistan toured New Zealand in the worst of Covid circumstances regardless of the crude treatment by NZ authorities on that tour.

"This was just an unverified threat, it could have been discussed. Prime Minister Imran Khan personally spoke to his NZ counterpart and assured but it was still refused. Pakistan has safely hosted South Africa, Bangladesh, West Indies, Sri Lanka, Zimbabwe & PSL," Akhtar wrote on Twitter.

"We're aware of New Zealand's decision to pull out of the Pakistan tour due to a security alert," an ECB spokesperson said.

"We are liaising with our security team who are on the ground in Pakistan to fully understand the situation. The ECB Board will then decide in the next 24-48 hours whether our planned tour (next month) should proceed."

"Such a shame for Pakistan cricket. These late call offs will damage the game hugely financially. Hopefully security issues can be resolved to allow cricket to be played again in Pakistan," Vaughan wrote on Twitter.

"New Zealand Cricket would not have made the decision to end their tour of Pakistan lightly - they have shown time and again that they are willing to do their part to promote and play our great game so I don't think it's right to be critical of them," Gillespie wrote on Twitter.

"We are all however disappointed for Pakistan cricket, its players and supporters. A wonderful cricketing country that has, for a long time, been denied consistent top level cricket. Hopefully the situation in the country improves quickly!"

"Extremely disappointed on the abrupt postponement of the series, which could have brought the smiles back for millions of Pakistan cricket fans," Azam wrote on Twitter.

"I've full trust in the capabilities and credibility of our security agencies. They are our pride and always will be!"

"This is heartbreaking. Pakistanis love cricket so much, we have worked really hard to bring cricket back here," he wrote on Twitter.

"PSL (Pakistan Super League) and other teams visiting Pakistan is evidence of our hospitality and security arrangements. We will continue our efforts."

"The security situation in Pakistan is great and satisfactory. Extraordinary security has been provided to the New Zealand team," he wrote on Twitter.

"After complete assurance and satisfaction, call for this last minute withdrawal of the series by NZ is so sad."

"On a HOAX threat you have called-off the tour despite all assurances!! @BLACKCAPS do you understand the IMPACT of your decision?" Afridi tweeted.

© Copyright 2022 Reuters Limited. All rights reserved. Republication or redistribution of Reuters content, including by framing or similar means, is expressly prohibited without the prior written consent of Reuters. Reuters shall not be liable for any errors or delays in the content, or for any actions taken in reliance thereon.
Related News: Pakistan, ECB Board, PCB, JASON GILLESPIE, Ardern
COMMENT
Print this article 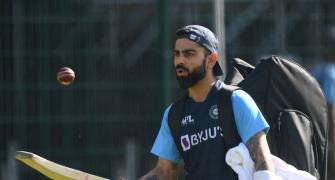 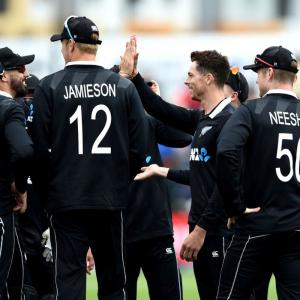