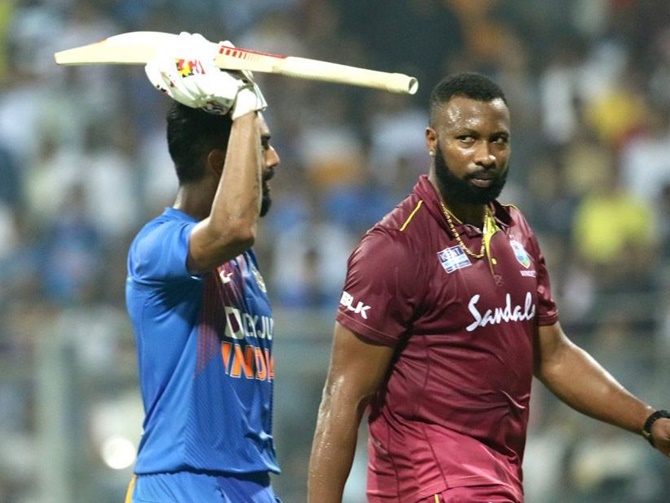 India captain Virat Kohli led a six-hitting fest against West Indies during a blistering unbeaten knock of 70 off 29 balls, guiding his team to a 67-run series-clinching victory in the third and final Twenty20 international on Wednesday.

Asked to set a target in the decider at Wankhede Stadium, the hosts batted the Caribbean side out of the contest with an imposing total of 240 for three from their 20 overs. 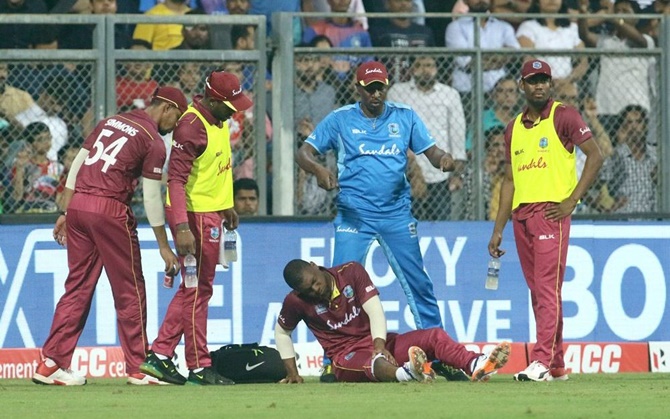 In reply, the twice world champions in the format finished on 173 for eight with captain Kieron Pollard top-scoring with 68 from 39, his innings studded with six sixes and five fours.

Hard-hitting West Indies opener Evin Lewis suffered soft tissue damage to his right knee while fielding and was unable to bat, dealing them a blow before their chase even started.

Once India's seamers reduced the tourists to 17 for three at the start of the fourth over, it was too much to ask even for the Caribbean power-hitters to turn the match around. 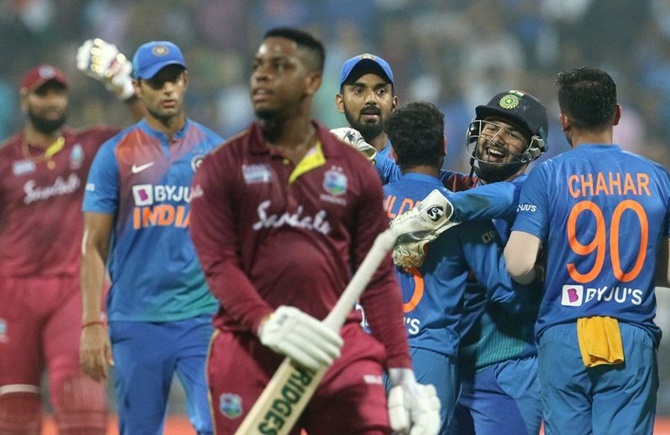 Shimron Hetmyer, who made 41 off 24, and Pollard added 74 for the fourth wicket to give West Indies some hope before left-arm wrist-spinner Kuldeep Yadav dismissed the former.

Kuldeep also dismissed the dangerous Jason Holder while Pollard holed out at wide long on off seamer Bhuvneshwar Kumar after an entertaining knock at the stadium, which is the home to his Indian Premier League franchise Mumbai Indians.

IMAGE: KL Rahul top-scored with 91 from 56 balls while Rohit Sharma made 71 from 34 deliveries. Photograph: BCCI

Earlier, KL Rahul had top-scored with 91 from 56 balls and set the platform for India's massive score with an opening stand of 135 with Rohit Sharma, who made 71 from 34 deliveries.

Kohli smashed seven sixes, two more than his deputy Rohit, while Rahul went over the boundary ropes on four occasions.

The dismissal of Rohit and Rishabh Pant, who fell without scoring, in quick succession brought a temporary lull in India's scoring rate before Rahul and Kohli went on the attack.

The duo added 95 for the third wicket and provided the late flourish before Rahul fell in the final over.

The sides will next play three one-day internationals, beginning with the first match at Chennai on Sunday.

© Copyright 2020 Reuters Limited. All rights reserved. Republication or redistribution of Reuters content, including by framing or similar means, is expressly prohibited without the prior written consent of Reuters. Reuters shall not be liable for any errors or delays in the content, or for any actions taken in reliance thereon.
Related News: Rohit Sharma, IMAGE, BCCI, Kieron Pollard, Virat Kohli
SHARE THIS STORYCOMMENT
Print this article