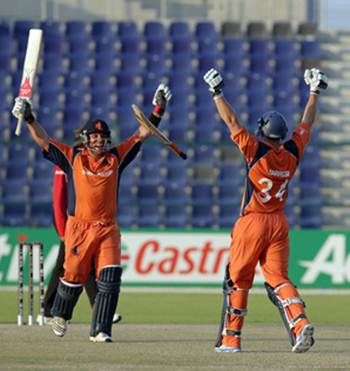 Hong Kong overcame a disastrous start to beat Papua New Guinea by 29 runs at the Zayed Cricket Stadium in Abu Dhabi on Thursday and secure a historic berth in the ICC World Twenty20 Bangladesh 2014.

With captain Jamie Atkinson watching from the sidelines due to a broken thumb, Hong Kong recovered from 19 for 4 inside four overs to post 137 for 9. Munir Dar then struck with three for 26 and Haseeb Amjad bagged two for 18 as Hong Kong bowled out PNG for 108 with five balls remaining.

Like Nepal, Hong Kong will be making a maiden appearance at the global stage when it will arrive in Bangladesh, in March 2014, where the West Indies will defend its men’s title and Australia will defend its women’s title.

Completing the line-up was the Netherlands, which defeated Scotland by eight wickets with 13 balls to spare, following Wesley Barresi’s 75 not out, Ben Cooper’s 40 and Michael Swart’s 30 not out.

The Netherlands last played in the 2009 event in England and had upset the host nation in the tournament opener at Lord’s.

Today’s results mean that all six qualification spots at the ICC World Twenty20 Bangladesh 2014 have been secured, with the six non-Test playing nations being Afghanistan, Ireland, Hong Kong, Nepal, the Netherlands and the UAE .

Meanwhile, Italy’s Gareth Berg registered the first hat-trick in the history of the competition as the Europe side defeated Namibia by 25 runs to secure ninth position.

In the first of the day’s match at Zayed Cricket stadium in Abu Dhabi, Hong Kong’s Babar Hayat (48), along with Mark Chapman (28 from 24 balls) and Munir Dar (22 from 15 balls) steadied the ship after their side had slipped to 19 for four in 3.5 overs.

After Chapman’s dismissal in the 18th over, Hong Kong lost three more wickets in five balls for two runs to finish at 137 for nine.

PNG’s Pipi Raho (three for 22) and Willie Gavera (three for 23) were the main wicket-takers.

In reply, PNG continued to lose wickets at regular intervals, which also prevented it from maintaining the required run-rate.

As a result, it needed 63 runs off the final 36 balls, which was always a difficult task. PNG was eventually bowled out for 108 in 19.1 overs with Tony Ura (21) and Geraint Jones (20) being the only notable run-getters.

A delighted Hong Kong vice-captain Waqas Barqat later said: “I have no words. It will be the first time Hong Kong will play in the ICC World Twenty20 tournament.

“I think the whole team was really keen to qualify and go to Bangladesh. Though all of us were tired and disappointed after losing yesterday’s match, we did not let our heads down. It is really good that we came back hard today. Even after losing four wickets early on, the guys had self-belief and we did it,” he said.

In the second match at the same venue, Barresi and Swart put on a match-winning unbroken 80-run partnership from 9.2 overs for the third wicket that helped the Netherlands defeat Scotland by eight wickets to become the sixth and last qualifier.

Barresi had earlier added 67 runs for the second wicket with Cooper whose 40 came off 28 balls and included five fours.

He was in sublime form, hitting the ball to all parts of the park. His 47-ball innings was studded with eight fours and a six, while Swart’s 28-ball innings included a four and a six.

Earlier, Matt Machan hit seven fours in his 53-ball 61 and Michael Leask slapped two fours and five sixes in a 46-ball 58 that helped Scotland post 147 for six in 20 overs. The two batsmen put on 111 runs for the third wicket after the Scots had lost both its openers within the first seven balls of the match.

For the Netherlands, Ahsan Malik (two for 24) and Mudassar Bukhari (two for 26) shared wickets.

Image: Michael Swart (left) and Wesley Barresi of the Netherlands celebrate after defeating Scotland in the quarter-final match 66 at the ICC World Twenty20 Qualifiers at the Zayed Cricket Stadium in Abu Dhabi on Thursday. 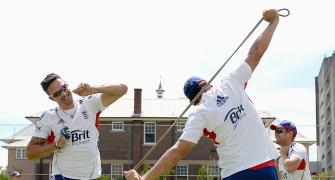 Can England displace India from No 2 Test spot? Govt zeroes in on six firms for divestment 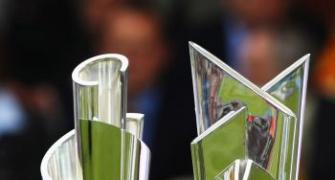 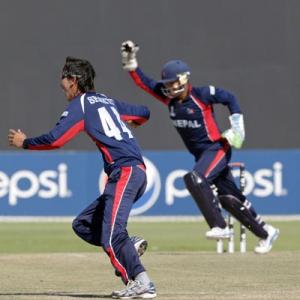 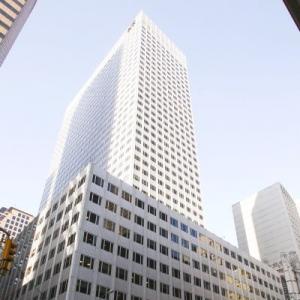