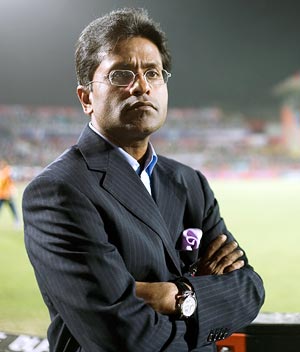 After securing the resignation of Union Minister Shashi Tharoor, Government on Monday said the entire Indian Premier League (IPL) will be under scrutiny including its funding and vowed not to spare any 'wrong-doer', as its top boss Lalit Modi came under the scanner of Income Tax authorities.

As the controversy-ridden IPL faces intense attack from the opposition and even a Union minister Vayalar Ravi over alleged murky finances, Income tax authorities asked the Board for Control of Cricket in India (BCCI) to respond by April 23 to ten queries, including the one on income from IPL and its entire structure.

The Enforcement Directorate said it will also investigate the alleged murky international deals of the cash-rich IPL while the Company Affairs Minister Salman Khurshid made it clear" we are in the picture."

Tharoor, Minister of State for External Affairs, was forced to resign on Sunday over his dealings with the IPL Kochi team.

The IPL was in focus in Parliament where the Opposition slammed the event as a "betting and  gambling ring" in which black money was involved, called for its ban and demanded that Government take over its affairs.  A Joint Parliamentary Committee probe into IPL's source of funds was also demanded.

Finance Minister Pranab Mukherjee said "no guilty or wrong-doer" will  be spared in connection with the IPL controversy and that all aspects including the sources and routes of funding of teams will be thoroughly probed.

In Mumbai, a senior IT official said the IT department probing alleged financial irregularities in the IPL will widen its inquiry into the assets and transactions of high-profile IPL commissioner Modi and his close associates including their financial interests abroad.

Ravi, a senior Congress leader and Overseas Indians Minister, lent weight to the Opposition attack calling the  cricket league as "glorified gambling" and wanted the whole system to be looked into by the government.

Modi himself rubbished allegations of betting and money laundering in the popular event and threatened to take legal action against a leading business daily which had made the accusations.

With Opposition parties training their guns on the government over the IPL dealings in the wake of the Modi-Tharoor row and the controversy over financial issues relating to IPL teams, Mukherjee told the Lok Sabha, "the concerned department has already started investigation process (into the IPL episode)."

Mukherjee assured members that "appropriate action as per law" would be taken if any wrongdoing is found in the manner the IPL is funded.

"The concerned department has already started investigation process (into the IPL episode). All aspects including sources of funding and routes through which the funds arrived would be looked into. Appropriate action as per law would be taken. No guilty or wrong-doer will be spared," Mukherjee said.

The BCCI, sources said, was asked questions relating to owners of IPL teams, their balance sheets, income earned during the various tournaments and the money paid to players.

Source: PTI© Copyright 2021 PTI. All rights reserved. Republication or redistribution of PTI content, including by framing or similar means, is expressly prohibited without the prior written consent.
Related News: IPL Kochi, Board for Control of Cricket in India, Pranab Mukherjee, Lalit Modi, State for External Affairs
COMMENT
Print this article