He has always been different from the rest and India's new head coach Rahul Dravid proved it once again by giving Green Park's groundstaff, led by Shiv Kumar, Rs 35,000 for preparing a sporting pitch for the first Test against New Zealand.

The Indian-born Ajaz Patel and Rachin Ravindra showed remarkable resilience under fading light and on a deteriorating track to defy India's famous spinners and eke out a thrilling draw for New Zealand after an engrossing fifth and final day of the first Test in Kanpur on Monday.

"We would like to make an official announcement. Mr Rahul Dravid has paid Rs 35,000 personally to our groundsmen," Uttar Pradesh Cricket Association (UPCA) announced in the press box after the game.

During his time, Dravid was known to play the game fair and square and things haven't changed one bit even after so many years. The tip was a token of appreciation for not dishing out an under-prepared track where the divot would explode and the match would end inside three days.

It was a proper pitch where batters who have applied themselves got runs, such as Shreyas Iyer, Shubman Gill, Tom Latham and Will Young, while pacers Tim Southee and Kyle Jamieson tormented India's top-order and the home team spinners got 17 wickets.

Dravid's appreciation means that the template going forward would be sporting wickets with a bit of everything rather than something diabolical. 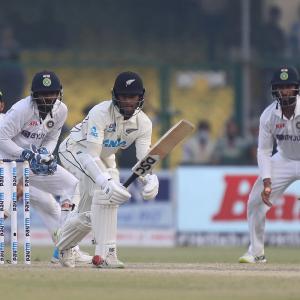