'Take up cage fighting and have a proper go'

'Let's see what you're really made of.' After Virat Kohli and Jonny Bairstow's verbal spat on Sunday -- which the Englishman played down as no big deal in his post-game media interaction -- David Lloyd jumped into the post-spat chatter.

'I do wonder where the line is and who draws it. Sportsmanship, banter, boorish behaviour, insults, abuse -- we saw everything on day four,' Lloyd -- who retired as a television commentator in December 2021 after Yorkshire cricketer Azeem Rafiq called him a 'closet racist' -- said.

'Cricket is a non-contact sport, but if a player feels the need to engage another, my advice is: Take up cage fighting and have a proper go. Let's see what you're really made of,' Lloyd wrote in his column for the Daily Mail newspaper.

Having said that, Lloyd praised 'pantomime villain' Kohli for reaching out to Bairstow and Joe Root after the Test ended on Tuesday.

'I thought the on-field scenes at the conclusion of the game were glorious, with India's players congratulating Root and Jonny Bairstow and recognising the epic job they had done,' Lloyd wrote.

'Special mention for Virat Kohli who at times plays the pantomime villain, but who had a special word with both players. I like that.' 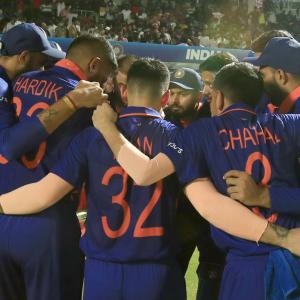