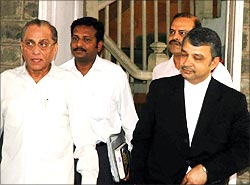 Former Board of Control for Cricket in India chief Jagmohan Dalmiya was arrested on Wednesday on charges of misappropriation of over Rs 2.90 crore of the cricket body's funds, but immediately released on bail of Rs 25,000.

Dalmiya was granted bail as per the provisions of a high court order, which granted him anticipatory bail over two years ago, his lawyer Satish Maneshinde said.

Dalmiya, who arrived at the Economic Offences Wing of the Mumbai police along with his lawyer, left for the Esplanade court after being released on bail.

The EOW, which is investigating the case, is going to file a charge sheet against Dalmiya, his secretary Chaudhury and Dutta at the Esplanade court.

Acting on a case filed by the BCCI in March 2006 after Union Agriculture minister Sharad Pawar took over as head of the body, the EOW found that Dalmiya diverted funds from legal fees towards other expenses, including payment for personal phone bills.