Australia rode on a dominating all-round display to thrash a lacklustre India by 72 runs in the first cricket One-dayer in Pune.

Electing to bat, the visitors piled up a mammoth 304 for eight relying on captain George Bailey's 85 and Aaron Finch's 72 and then shot India out for 232 in 49.4 overs to take 1-0 lead in the seven-match ODI series.

The Indian run chase under lights at the MCA Stadium never get going against the sustained and aggressive Australian bowling attack.

The visiting side, who were handed a four-wicket defeat in the one-off T20 International at Rajkot on October 10, bowled a disciplined line and length and choked the Indian batsmen in the middle overs.

Chasing 305 for a win, India needed to fire on the top of the order but they failed to do so, losing both the openers Shikhar Dhawan (7) and Rohit Sharma (42) for 66 on board in the 14th over.

Virat Kohli top-scored with 61 from 85 balls with six fours, while Suresh Raina contributed a 45-ball 39.

Ravindra Jadeja (11) and skipper Mahendra Singh Dhoni (19) could not pull the team around after India slumped to 166 for five by the 35th over just before the power play and their dismissals in successive overs effectively ended the match.

For Australia, James Faulkner grabbed three wickets for while Clint McKay and Shane Watson chipped in with two wickets apiece. Mitchell Johnson, Aaron Finch and Adam Voges got a wicket each.

Australia had lost by four wickets in the opening game of their short tour, the one-off T20 International at Rajkot on October 10.

India began the stiff run chase on a cautious note against some very accurate and aggressive bowling in the initial power play overs by left-arm pacer Johnson, who was rested for the T20 game, and right-arm pacer McKay. 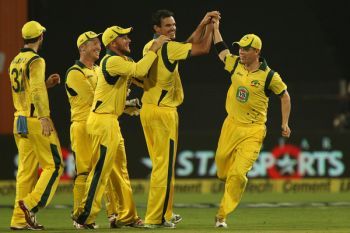 Dhawan and Rohit were tested with some three quarter length balls interspersed with short rising ones and the latter was lucky to edge one just short of wicketkeeper Brad Haddin off McKay.

The opening stand was broken by young left-arm pacer Faulkner who lured Dhawan with a ball that swung away a bit for the batsman to edge to stumper Haddin.

The stumper, however, got hurt while celebrating the fall of the wicket and had to hand over the wicket keeping duties to Phil Hughes to take treatment in the dressing room.

Rohit slowly grew in confidence and struck Faulkner for three fours in the ninth over to pep up the run rate.

The second wicket duo of Rohit and Kohli had added 40 runs with the former looking in good touch before he threw away his wicket by top-edging in an attempted slash to stop-gap wicketkeeper Hughes who took a good catch. The Mumbai batsman hit six fours in his 47-ball knock.

Rohit's dismissal brought in Raina together with Kohli, but the run-rate dipped. It needed some aggressive batting from the young duo and Kohli set the tone by striking successive fours off part-time spinner Voges while Raina, who scratched around till then, stepped out and lofted Doherty over the straight field for his first six.

The duo's half century stand brought India back on track in the run-chase. But the dismissals in quick succession of Raina and Yuvraj Singh (7) for the addition of just five runs pushed India on the backfoot again.

Kohli, who reached his fifty in 64 balls, was trapped leg before at the team score of 166 by Watson. After a brief partnership of 26 runs for the sixth wicket, Jadeja was caught brilliantly at mid on by Australian skipper Bailey.

Then Dhoni lost his off stump to McKay in the 41st over at 196 to signal the end.

Earlier, opener Aaron Finch struck his second successive half-century of the tour while captain George Bailey scored a fine 85 as the Australia made mincemeat of the insipid Indian bowling attack to pile on a huge 304 for eight.

Finch, who helped the visitors make an imposing 200-plus total at Rajkot in the tour-opening one-off T20 International, was again in attacking form with a well-made 72 off 79 balls with eight fours and three sixes after Australia opted to bat.

Finch and fellow opener Phil Hugues (47) got Australia off to a solid start with 110-run opening stand before India fought back through their left-arm spin twins Ravindra Jadeja (1 for 35) and Yuvraj Singh (2 for 34).

Thereafter Bailey, who made a duck in the T20 game that Australia lost by four wickets, kept the innings together with a superbly paced 82-ball knock, studded with 10 fours before he was caught at deep mid wicket off Ravichandran Ashwin.

James Faulkner (27 off 22 balls) struck breezily towards the end to help the visitors cross the 300-mark after a mid-innings stutter.

The Indian bowlers, barring Jadeja and Yuvraj, looked off colour, particularly Ishant Sharma (1 for 56), who just like in the T20 game, gave away lot of runs for a late wicket.

Even the ground fielding left a lot to be desired.

Ashwin started poorly before making it up with two late wickets, including that of Bailey. However, Bhuvneshwar Kumar (0 for 41) and Vinay Kumar (1 for 68) proved too expensive on a good batting track. 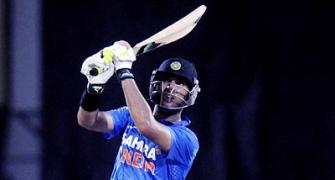 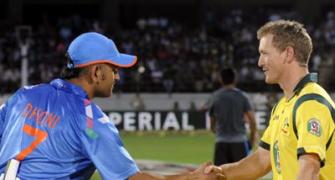 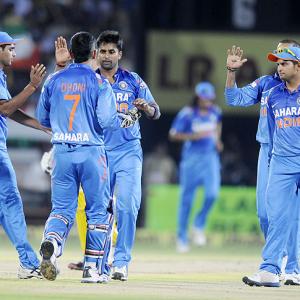 Will India defend their No 1 ranking against Australia in ODIs? 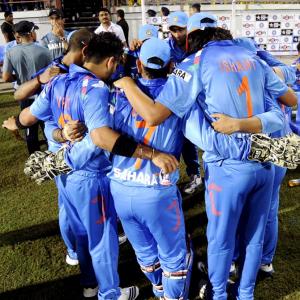 World champions India start as favourites against Australia in ODIs