Kevin Pietersen waged a lone battle but Delhi Daredevils simply lacked the firepower as they lost to Highveld Lions by 22 runs in the first semi-final of the Champions League Twenty20 in Durban on Thursday.

On a bouncy Kingsmead pitch, Highveld Lions got a decent 139 for five which was par for the course and then restricted Daredevils to only 117 for nine.

With Daredevils' defeat, the challenge of IPL teams in this edition ended on a disappointing note.

The Daredevils batsmen save Pietersen who scored 50 off 44 balls, looked in utter discomfort against Lions attack especially pacer Chris Morris. Morris bowled fast and straight as he gave away only seven runs in four overs taking prize wickets of David Warner and Pietersen. 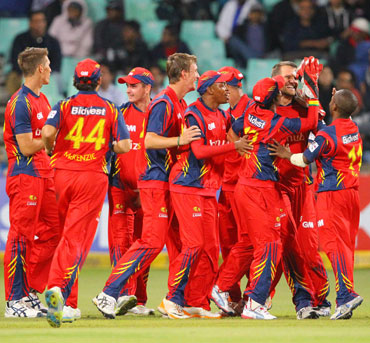 Morris and find of the tournament left-arm spinner Aaron Phangiso (2-17) gave away only 25 runs in the eight overs between them getting four wickets in the process. That was decisive although Daredevils never looked like being in the match once they started batting.

Virender Sehwag lasted only one delivery as he decided to loft the Sohail Tanveer straightaway but only managed to offer rival skipper Alviro Peterson an easy catch.

Warner, playing his first match of the tournament started with couple of boundaries off Dirk Nannes -- a flick and then a pull in-front of square. Pietersen then got his first boundary off Tanveer with another pull-shot.

The fifth over turned out to be a productive one for Daredevils as Pietersen and Warner got three boundaries off Nannes. While KP smacked one past Warner, the Aussie opener hit couple of boundaries through off-side cordon.

Just when it looked like Mahela Jayawardene's decision to include Warner at his own expense was a masterstroke, the Aussie failed execute a short-arm pull off Morris as the bowler safely pouched onto the skier. Warner made 21 off 18 balls with four boundaries.

Unmukt Chand wasted precious deliveries before he was holed out in the deep after scoring only 9 off 20 balls. The 12th over fetched 10 runs mainly due to a huge six by Pietersen but Phangiso dismissed Irfan Pathan for one to reduce Delhi to 72 for four. Stand-in skipper Ross Taylor was gone due to sharp return catch taken by Nannes and there was no way Daredevils could have come back in the match.

Earlier, a half century by opener Ghulam Bodi and some effective hitting by Neil McKenzie saw Highveld Lions put up a respectable 139 for five after being put into bat.

Daredevils pace quartet did a commendable job as the foundation of Lions' total was based on 59-runs for the fourth wicket added by Bodi and Neil Mckenzie.

The breezy day at Kingsmead did make life dificult for the Daredevils fielders as they dropped as many as three catches. The offenders were Unmukt Chand, Umesh and Kevin Pietersen.

Birthday boy Umesh provided the initial breakthrough as he induced a thickish edge off Peterson's bat which was taken by Naman Ojha. It was fuller delivery which Peterson had made room to hit over extra cover.

Peterson made 24 off 19 balls with three fours and a six. Quinton de Kock got a reprieve off Yadav's bowling when his mistimed flat pull-shot went straight Unmukt Chand at deep square leg but the India colts skipper lost the sight of the ball to concede a boundary.

De Kock hit a lofted shot off Umesh to get a boundary but another pull-shot ballooned up in the air and Unmukt this time took a well-judged catch. The bounce in the pitch also helped left-arm spinner Negi who got one to rear up awkwardly on Dwayne Pretorius as he lobbed an easy catch for stand-in skipper Ross Taylor.

However Bodi and McKenzie stepped up the ante in the back 10 as they got 77 runs. Interestingly, Bodi has a contract with Delhi Daredevils in Indian Premier League.

In the end, Jayawardene's decision to opt out didn't help Daredevils' cause in the end. 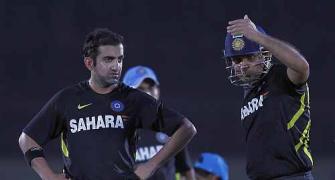 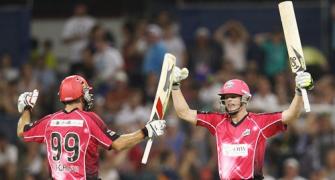 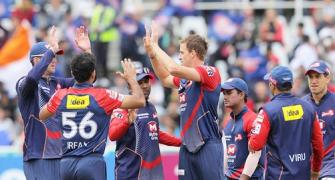 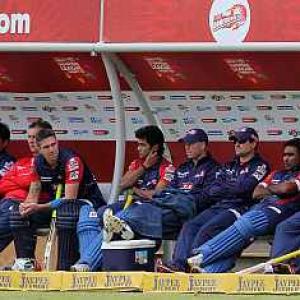 'I want Pietersen to score match-winning runs vs India'