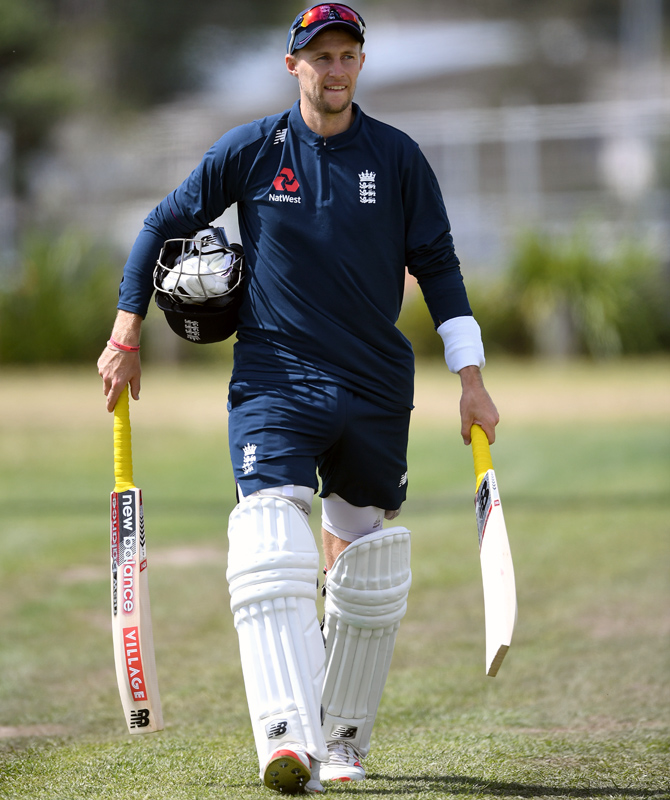 IMAGE: Joe Root contributed with scores of two and 11 in the first Test at Bay Oval, his worst return in a Test since he took over the captaincy in early 2017. Photograph: Gareth Copley/Getty Images

England captain Joe Root is under no illusions about his batting slump and recognises if his side are going to win the second match in Hamilton and level the two-Test series against New Zealand then he needs to make a substantial contribution.

Root's side were hammered by an innings and 65 runs in the first test in Mt. Maunganui when New Zealand, anchored by BJ Watling's marathon 11-hour maiden Test double century of 205, scored a mammoth 615-9 declared.

England were bowled out for 353 and then 197 with Root contributing scores of two and 11 at Bay Oval, his worst return in a Test since he took over the captaincy in early 2017, and fifth-worst in his entire 87-match career.

"I am not far away," Root told British media in Hamilton on Thursday of his form. "I played two horrendous shots in the last game (but) the fact I am getting myself out, you can deal with that."

The worrying thing for Root and new coach Chris Silverwood, who will leave the tour on Saturday after a family bereavement, is that Root has been on a downward track since he succeeded Alastair Cook as skipper almost three years ago.

The 28-year-old has long been considered one of the premiere batsmen in world cricket and often bracketed with India's Virat Kohli, Australia's Steve Smith and New Zealand's Kane Williamson as a 'big-four'.

His double failure at Bay Oval, however, saw him drop outside the top-10 in the International Cricket Council's rankings of Test batsmen for the first time in more than five years.

Root, who had kept his career average above 50 - and amongst the all-time greats of the game - since he first got there in mid-2014, has spiralled even further downwards in a terrible 2019.

Despite his struggles he is still the most successful and prolific batsman in England's line-up and feels he is still getting into right positions that should enable him to score heavily in the must-win match at Seddon Park.

"I am moving well, hitting the ball well. I have just got to keep that mentality ... get my feet moving, stay busy, and go about my business as I have for four or five years," he said.

"I have got to trust that that's going to come."

© Copyright 2020 Reuters Limited. All rights reserved. Republication or redistribution of Reuters content, including by framing or similar means, is expressly prohibited without the prior written consent of Reuters. Reuters shall not be liable for any errors or delays in the content, or for any actions taken in reliance thereon.
Related News: Joe Root, New Zealand, Bay Oval, England, International Cricket Council
SHARE THIS STORYCOMMENT
Print this article