BCCI had instructed Kohli to stay away from felicitation

The attitude of the Delhi government regarding the now cancelled felicitation of former India cricketers was such that the top brass of the Indian cricket board had instructed skipper Virat Kohli to stay away from the function in case it would have taken place on Saturday.

- Kejriwal insisted on felicitation on field of play: Mudgal

- BCCI says no to felicitation of World Cup winners in Delhi 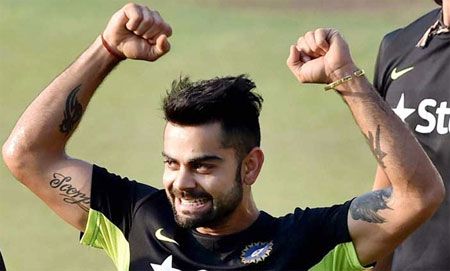 It was also learnt that Board of Control for Cricket in India had turned down a similar request from Royal Challengers Bangalore during the second Test match when they wanted to felicitate AB de Villiers for playing his 100th Test match.

The reason was same that "a third party cannot have a function in FOP (Field of Play) during a Test match.

"Virat is a contracted player by the BCCI. He was clearly instructed that he should stay away from the function if it would have at all taken place. In the midst of the match, an Indian captain cannot be allowed to take part in the felicitation of a third party," a senior BCCI official privy to the development said.

"Not for once did Delhi government request us for the felicitation function. Only after knowing about the protocol Padmini Singla (IAS officer and Director of Education and Sports) sent a letter to Justice Mukul Mudgal. There was no request informing us what they intended to do. They even thanked us before knowing whether they are entitled to use the FOP (Field of Play)," the official showed the letter sent by Delhi government on Friday.

The BCCI officials were also unhappy that the state government was under the impression that the event of felicitation would be covered live.

"Advocate Rahul Mehra said that they were under the impression that Star Sports will air the event live. Who gave him that impression? And Star Sports are broadcasters of the event. It is the BCCI which is in charge of production and feed. Even then we said that Harsha Bhogle will anchor the event and we will shoot it and use it later. This is when they thought they won’t get the publicity deserved. We told them to go ahead anywhere apart from FOP (Field Of Play). They should have known that its only DDCA’s ground but the event is BCCI’s,” said the official.

Source: PTI© Copyright 2020 PTI. All rights reserved. Republication or redistribution of PTI content, including by framing or similar means, is expressly prohibited without the prior written consent.
Related News: BCCI, FOP, Mukul Mudgal, Board of Control for Cricket, Delhi
SHARE THIS STORYCOMMENT
Print this article