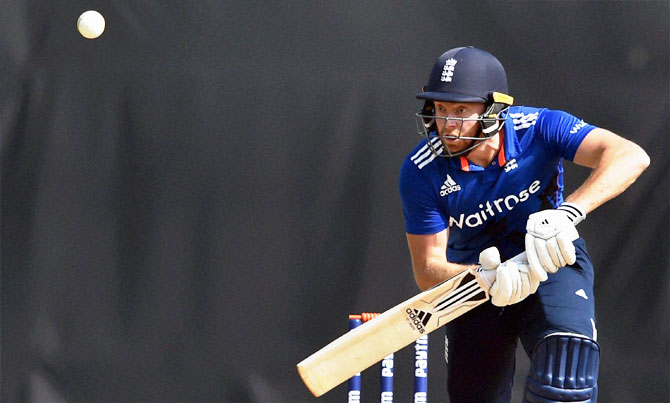 England batsman Jonny Bairstow conceded that facing up to the twin threat from India’s spin duo of Ravichandran Ashwin and Ravindra Jadeja would continue to pose a big challenge to his side in the One-Day International series starting at Pune on January 15.

"I have faced Ashwin and Jadeja in Test matches (that preceded the limited overs series). We know they have got skills which are well documented. It's a great challenge," said Bairstow after the second warm-up game lost by the tourists to an India A side led by Ajinkya Rahane on Thursday.

Off-spinner Ashwin snapped up 28 wickets, two more than Ashwin who spun the visitors to their doom in Chennai to help India complete a 4-0 triumph over England in the five-Test rubber.

"I am sure when India come over to England with the white ball swinging, their batsmen also look at it as a challenge," added Bairstow who scored 352 runs at 44 per innings in the Test series in which he kept wickets too and took 11 catches and effected two stumpings.

In the second tour match against India ‘A’ on Thursday, the 27-year-old Yorkshire batsman top-scored for England with 64 out of a total of 282 all out in 48.5 overs, a  total which was overhauled quite comfortably by the Ajinkya Rahane-led squad at the Brabourne Stadium.

Bairstow did not think it was much of a concern that his side had another middle-order wobble, like it did two days ago when playing but winning their first warm-up game at the same venue, against the slow bowlers.

"We scored 300 nearly twice. I don't think it's of concern. As a side we are doing very well and are scoring 300 regularly. But in a way it was a good thing it (loss) happened here than in Pune. It gives us time to refocus, kick our backside a bit before we go to Pune," said Bairstow who will play as a pure batsman if given a chance in the ODIs.

He was pleased with his innings, although he wanted it to be bigger, but was under no illusion that he will be preferred to Joe Root, who has joined the team late, despite it.

"I struck the ball well. I was trying to convert my Test form into one-dayers. Sixty five was pleasing, but disappointing not to go on. When Root is back Root plays (ahead of me).

"My form recently in India in the Test series was pretty good. The two and a half to three months I had spent in Bangladesh and India, playing Tests in these conditions, have helped me immensely," he said.