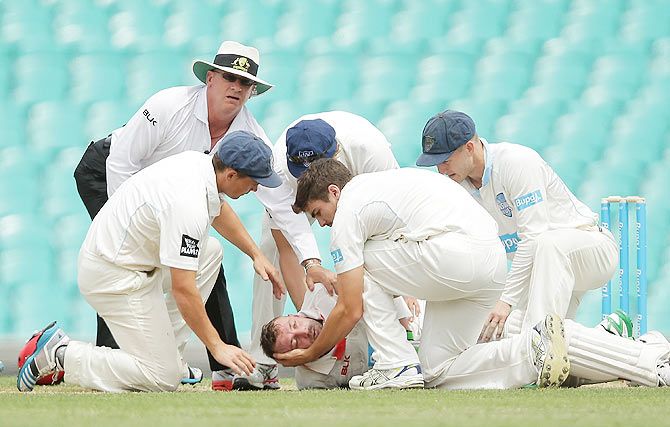 Phillip Hughes of South Australia is helped by New South Wales players after falling to the ground after being struck in the head by a delivery. Photograph: Mark Metcalfe/Getty Images

Australia cricketer Phillip Hughes was still fighting for his life on Wednesday as family and friends kept vigil at his hospital bedside.

Hughes remains in an induced coma after undergoing emergency surgery on Tuesday when he was struck in the head by a bouncer, a devastating blow that experts likened to the trauma experienced by car crash victims.

- 10 critical injuries on the cricket field 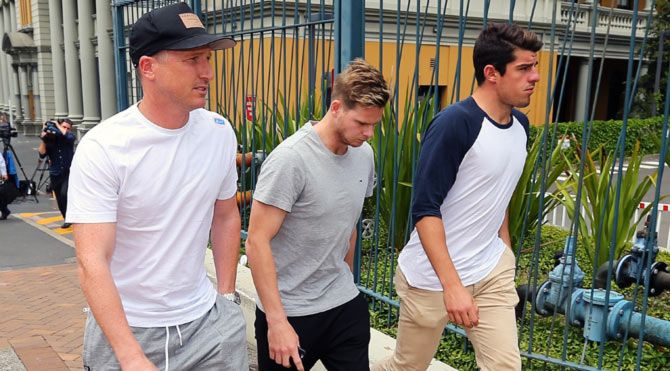 The 25-year-old underwent further scans on Wednesday morning but medical staff at Sydney's St Vincent's hospital did not disclose the results.

"If there are any further developments we will let you know immediately."

Hughes needed CPR and mouth-to-mouth resuscitation after he collapsed at the Sydney Cricket Ground when he was struck in the back of the head by a short-pitched delivery.

He was rushed by ambulance to the nearby hospital and immediately underwent an operation to relieve the pressure on his brain.

"While it's an extraordinary injury in cricket, such head trauma injuries are seen in high speed car crashes all the time and there are some miracle stories of full recoveries," Larkins told Reuters. 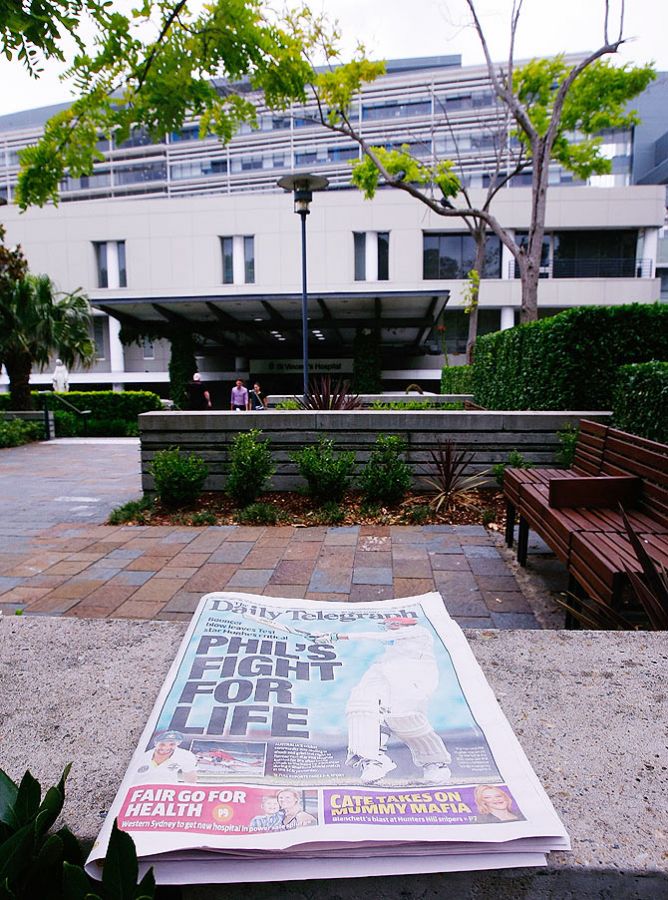 A newspaper with a cover of Phil Hughes is seen at St Vincent's Hospital in Sydney on Wednesday. Photograph: Joosep Martinson/Getty Images

The cricketing community remains in a state of shock with players from around the world sending their well wishes to Hughes.

Members of the Australian national team, including the captain Michael Clarke, spent hours at his hospital bed, comforting the stricken player's mother and sister.

As a sign of respect, Cricket Australia (CA) called off the entire round of matches in the country's domestic first-class competition.

"Given how players across the country are feeling right now, it's just not the day to be playing cricket," CA's Pat Howard said in a statement.

CA has offered counselling to players who witnessed the incident, including paceman Sean Abbott, who bowled the ball that reared up and struck Hughes.

Abbott was one of the first players to aid Hughes when he crumbled on to the pitch, cradling him until medical staff arrived on the field.

"Sean will have all the support he needs around him," CA chief executive James Sutherland said.

"I'm sure his team mates and everyone don't feel in any way ill of him for what happened. It's a freak, freak incident that's happened."

The horrific injury suffered by Hughes providing a sobering reminder of the risks that cricketers face every time they go out to bat.

Although life-threatening injuries are rare, Hughes is not the first player seriously hurt after being struck by a cricket ball.

Former New Zealand international Ewen Chatfield swallowed his tongue and stopped breathing after being hit in the head while batting in a Test match against England in 1975.

He told Reuters in an interview: "You don't like seeing people getting injured seriously.

"It's just one of those very unlucky things you see in sport."

The injury to Hughes also turned attention on the helmets used in cricket after manufacturer Masuri said the Australian was not using the latest version.

However, the equipment makers said they want to fully review the incident before making any conclusions.

© Copyright 2021 Reuters Limited. All rights reserved. Republication or redistribution of Reuters content, including by framing or similar means, is expressly prohibited without the prior written consent of Reuters. Reuters shall not be liable for any errors or delays in the content, or for any actions taken in reliance thereon.
Related News: Phillip Hughes, Sean Abbott, South Australia, Brett Lee, Sheffield Shield
COMMENT
Print this article 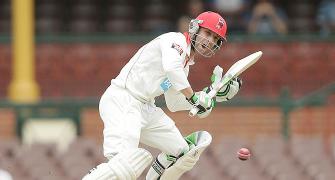 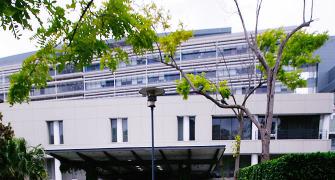 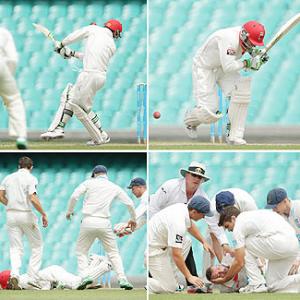 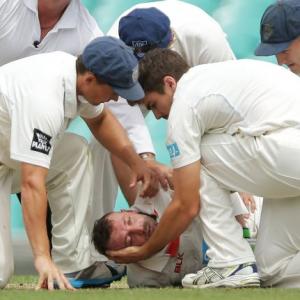