Australia won the third and final Test against West Indies by 75 runs on Friday to secure a 2-0 series win despite a valiant second innings effort from the home side.

Set a daunting target of 370 to win, West Indies resumed on 173 for five and were bowled out for 294, shortly before lunch on the final day.

Australia captain Michael Clarke finished with five wickets for only the second time in his Test career while his counterpart Darren Sammy scored a lively 61, his best Test score. The chase ended when Sammy top-edged Nathan Lyon, as he tried to sweep the spinner, and Ben Hilfenhaus pocketed the catch to prompt celebrations from the tourists.

The Dominican crowd had appreciated a good and entertaining effort by the West Indian tail with local favourite Shane Shillingford making his best Test score of 31 in a 49 run last wicket stand with Sammy.

The target always looked too much for West Indies on a pitch that offered turn and bounce for the spinners but West Indies may wonder what might have been had Shivnarine Chanderpaul and Darren Bravo survived the final session on Thursday.

Their 110 run partnership offered a glimmer of hope to the Caribbean team but Australia never really looked like letting slip their grip on the series.

The first innings century from Australia wicket-keeper Matthew Wade proved to be decisive in the final assesment, the tail-end resistance he led taking the total from 169-7 to 328.

As in the victory in the first test in Barbados it was the ability of Australia's lower order to make key contributions that proved the difference.

Clarke's contribution with the ball on the last two days was a further reminder that while Australia may not have the world-class line-up of a few years ago, they still bat deep and have plenty of options with the ball.

A fourth innnings total of 294 for West Indies on a surface that had been tough to score on, was a good effort and with Sammy's strokeplay at the close giving a supportive crowd something to cheer, the Caribbeans at least lost in the right manner.

While West Indies now head off for a tough three Test series in England, Australia will not play Tests until South Africa visit in November. 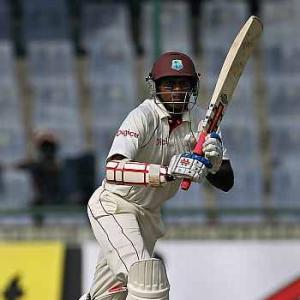