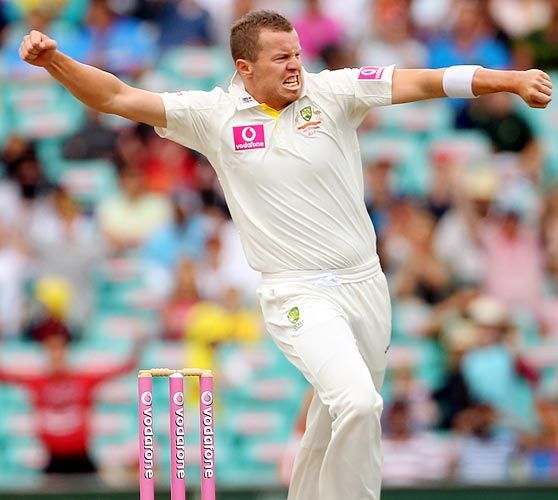 IMAGE: Peter Siddle has not played a Test in Australia since late 2016. Photograph: Getty Images

Pace bowler Peter Siddle has been brought into Australia's squad in place of the injured Josh Hazlewood for the second Test against New Zealand on what is expected to be a benign Melbourne Cricket Ground (MCG) pitch.

Hazlewood suffered a low-grade hamstring tear in his second over in the opening match of the series in Perth and did not bowl again as Australia romped to a 296-run victory inside four days.

"Peter Siddle helped us retain the Ashes, he's got over 200 Test wickets, he's a ripping person around the team," coach Justin Langer told reporters in Perth. "For the Boxing Day Test match he just seemed like the simple solution."

The 35-year-old Siddle, who has not played a Test in Australia since late 2016, was still behind James Pattinson and Michael Neser in the pecking order despite the game being played on his home ground, Langer added.

"We selected James Pattinson and Michael Neser, they both haven't played yet," Langer said.

"They'll be in front of him. That's about consistency of selection. I'd say James or Michael or both of them will definitely play that test match."

Pattinson was unavailable for selection for the first Test against Pakistan in Brisbane last month after being banned for abusing an opponent in a first-class match.

The 29-year-old is also from Victoria but has not played a Test on his home ground in Melbourne since 2015 after a succession of back injuries.

Langer had told reporters after the first Test victory in Perth that his side would consider going into the match that starts on Dec. 26 with four pace bowlers and offspinner Nathan Lyon because the pitch in recent years had favoured batsmen.

Pattinson, who has taken 75 wickets in 19 Tests, is likely to be the third seamer alongside Mitchell Starc and Pat Cummins.

Neser is yet to play a Test.

Uncapped fast bowler Kyle Jamieson has been called into the New Zealand squad for the remainder of their Test series against Australia after Lockie Ferguson suffered a strained calf muscle in the first Test loss in Perth.

Ferguson bowled just 11 overs in the first innings of his Test debut before he limped off with the injury and did not bowl again in the 296-run defeat. He was ruled out of the series on Monday.

Jamieson, 24, will join the squad in Australia on Wednesday with the second Test not due to begin at the Melbourne Cricket Ground until Dec. 26.

"It's an exciting opportunity for Kyle who has impressed in the Plunket Shield domestic four-day competition," New Zealand coach Gary Stead said in a statement.

"We've also been really encouraged by his progress in the... winter camps and his performances for New Zealand A."

"It will be his first time in camp and we're looking forward to welcoming him into the environment."

The two-metre tall Jamieson, who has taken 72 wickets at 27.93 in 25 first class games, could find it difficult to break into the New Zealand pace attack for the match, with Trent Boult expected to be fully fit.

Boult missed the drawn second Test against England and then the match at Perth Stadium with a rib muscle injury but Stead said after the first Test loss to Australia that he had been almost at full fitness before the game but had not been risked.

Stead is expected to have to make at least two other selection decisions ahead of the second Test with opener Jeet Raval out of form while left-arm spinner Mitchell Santner's position is also in question.

The 27-year-old Santner is arguably the best batting option as a spin-bowling all-rounder in New Zealand but lacks penetration with the ball and is used more in a holding role to tie up one end.

He has just 38 wickets at 43.15 in his 21 Tests and has never taken more than three wickets in an innings.

The second test, New Zealand's first at the MCG since 1987, will be followed by the final match of the three-Test series at Sydney Cricket Ground starting on Jan. 3.

© Copyright 2020 Reuters Limited. All rights reserved. Republication or redistribution of Reuters content, including by framing or similar means, is expressly prohibited without the prior written consent of Reuters. Reuters shall not be liable for any errors or delays in the content, or for any actions taken in reliance thereon.
Related News: Peter Siddle, James Pattinson, Michael Neser, Kyle Jamieson, Australia
SHARE THIS STORYCOMMENT
Print this article 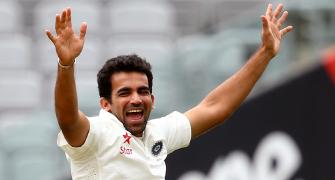 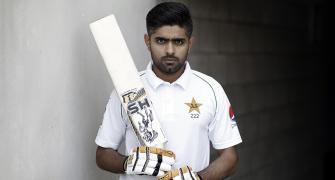 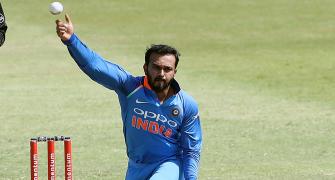 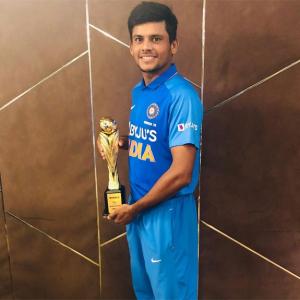