Chris Rogers became the second oldest Australian to hit a maiden Test century as he led his team to 222 for five on the second day of the fourth Ashes Test against England in County Durham on Saturday.

The gritty left-handed opener nudged and nurdled his way to 101 not out after a four-wicket burst from Stuart Broad had threatened to put England, bowled out without adding to their overnight total of 238 for nine, on top.

Rogers, who turns 36 on August 31, was given good support by Shane Watson (68) as the pair shared a stand of 129 for the fifth wicket on a tricky day for batting.

It was Rogers, though, who took the plaudits by becoming the second oldest Australian to hit his first Test ton. Arthur Richardson was 37 when he reached three figures against England at Leeds in 1926.

Rogers, making only his fifth Test appearance, needed a generous helping of good fortune at the Emirates Durham and also suffered several nervous moments in the 90s. 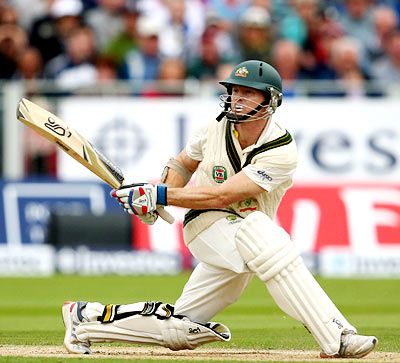 The day began with England's last man James Anderson being hit on the helmet by a bouncer from Jackson Bird.

Later in the same over Bird ended the innings by bowling Anderson for 16, leaving Tim Bresnan undefeated on 12.

It did not take long for England to make inroads at the top of the Australian order, Warner being bowled by an inswinger from Broad that clipped the top of off stump with the total on 12.

There had been no addition to the score when Khawaja could not decide whether to play or leave a delivery from Broad and the ball struck the toe of his bat before going through to Matt Prior.

It was the 200th catch of Prior's career on his 71st Test appearance and left him third on the all-time list of England wicketkeepers, behind Alec Stewart (227) and Alan Knott (250).

The home team, 2-0 up in the five-match series, then wasted a video review when Broad hit Rogers in front on the pad but the replay showed the ball had pitched a couple of inches outside leg stump.

The video replay showed the ball clipping the pad, not the bat, and the hosts quickly changed their appeal to an leg before wicket shout.

England's players started celebrating when the big screen in the corner of the ground showed the ball striking the stumps but that appeal was also turned down because it was only clipping the top of the bails.

Captain Alastair Cook and his players remonstrated with Hill and his colleague Aleem Dar but to no avail.

Rogers responded in defiant manner by hitting two fours in one over from Bresnan.

Broad took his third wicket when Clarke slashed a wide ball to first slip where Cook took a good reaction catch high above his head.

When Bresnan had Steve Smith caught behind by Prior for 17 after lunch, it seemed as though England were ready to run through the Australian lineup. But Watson, demoted to number six for this Test, provided a reassuring presence alongside Rogers.

Rogers reached his half-century with an edge off Broad that was put down by Graeme Swann as he dived full-length at second slip.

Watson played a classy shot for four through mid-wicket off Broad before following up with two more boundaries off Anderson, one a clip through square leg and another coming from a venomous pull through wide mid-on.

The Australian all-rounder finally fell in unlucky fashion just before the close of play, edging Broad to Prior who took a tumbling catch down the leg side.

Brad Haddin (12) was the other undefeated batsman when stumps were drawn early because of bad light.

© Copyright 2021 Reuters Limited. All rights reserved. Republication or redistribution of Reuters content, including by framing or similar means, is expressly prohibited without the prior written consent of Reuters. Reuters shall not be liable for any errors or delays in the content, or for any actions taken in reliance thereon.
Related News: Matt Prior, Stuart Broad, England, Usman Khawaja, Michael Clarke
COMMENT
Print this article 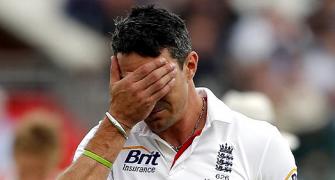 DRS: Are you for or against it? 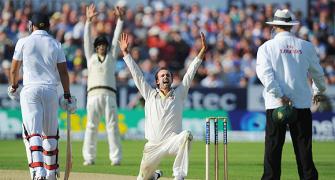 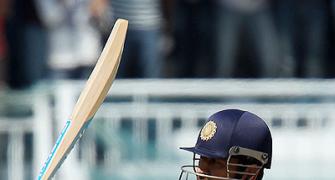 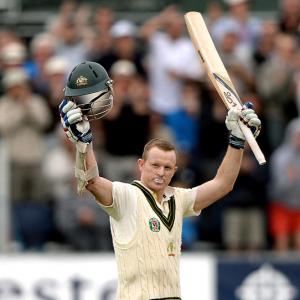 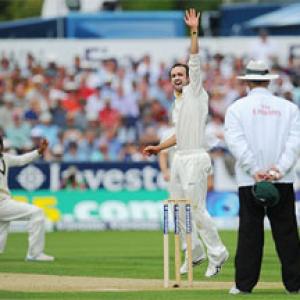 Ashes: Lyon roars to give Aus upper hand on Day 1