Amla, Steyn quietly slog it out ahead of India game When you are on the wrong side of 30s and veterans of many memorable wins, it is painful to witness embarrassing defeats and more so from the sidelines.

It is difficult to comprehend what exactly is causing more grief for Dale Steyn and Hashim Amla – the shoulder injury and concussion respectively or the defeat against Bangladesh, which is a scar that can hurt much more.

Less than 24 hours after South Africa's most ignominious defeat in a World Cup game, Steyn, 35, and Amla, 36, were at the Ageas Bowl with a couple of support staff members, having a 75-minute session under the scorching sun. The desperation was palpable on both fronts.

The team is seeking direction from its two senior-most players who would not like their final World Cup to be a forgettable one.

Having travelled for a couple of hours from London in the morning, the two champions walked in the afternoon as the sun shone brightly after playing hide and seek during the India net session.

Since it was a suddenly organised session, no nets were put up as Amla batted for more than an hour while Steyn bowled for around 30 minutes.

Steyn bowled from a longish run-up even though he was a bit gingerly. He didn't show any apparent discomfort but whether he is fit enough to be included in the final XI against India is yet to be ascertained.

He kept the deliveries on the off-stump channel which Amla primarily defended and a few that drifted down the pads were driven.

One of the support staff members bowled leg-breaks and Amla took a lot of throwdowns during the session. Team Doctor Mohammed Moosajee had already indicated that Amla is being prepared for the India game and he looks good to go.

With two leg-spinners operating in tandem, Amla's experience at the top of the order will be like gold.

Ditto for Steyn, whose mere presence would ensure that Virat Kohli and Co are more alert.

The Proteas need their two veterans in this hour of crisis and the duo are gearing to give their all. 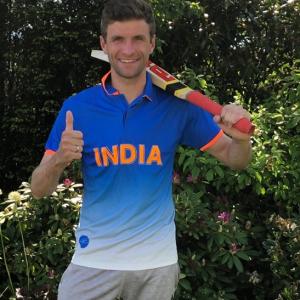 ICC WC: Guess which footballers are rooting for India?