News
Business
Movies
Sports
Cricket
Get Ahead
Money Tips
Shopping
Sign in  |  Create a Rediffmail account
Rediff.com  » Cricket » Cook served up a few milestones as captain. Here they are...

Cook served up a few milestones as captain. Here they are...

Factbox on opening batsman Alastair Cook, who stepped down as England Test captain on Monday. 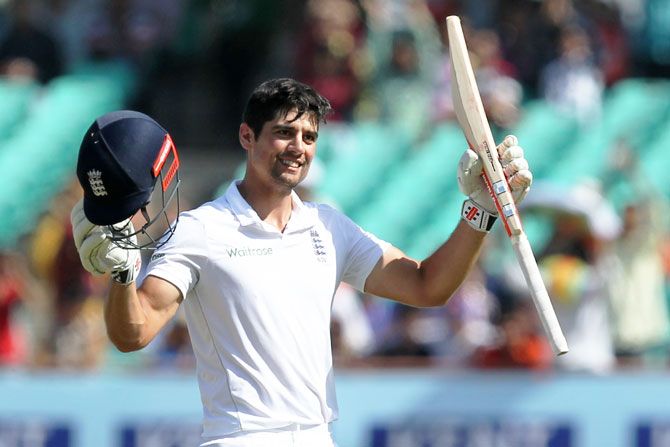 *Led England in 59 Tests, more than any of his predecessors.

*Scored an unbeaten 104 on Test debut against India at Nagpur in 2006 and made his one-day international debut against Sri Lanka in the same year.

*Scored 766 runs in seven innings during the 2010-11 Ashes tour to help England to their first series win in Australia for 24 years.

*Scored 294 against India in 2011, his highest Test score to date, and was named as the International Cricket Council's (ICC) Test Cricketer of the Year.

*Succeeded Andrew Strauss as ODI skipper in 2011 and as permanent Test captain in 2012. 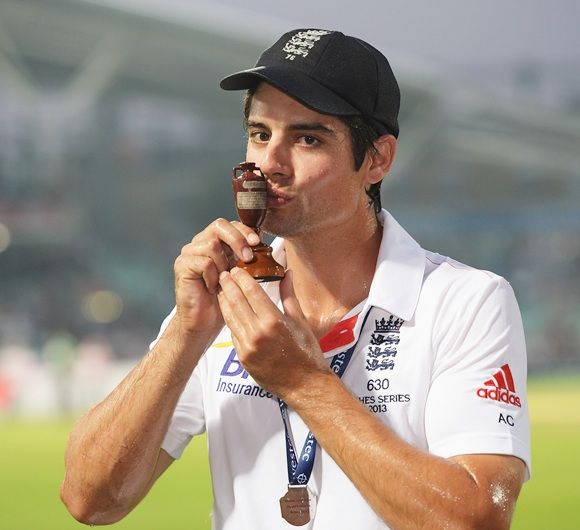 * Scored his 23rd century in 2012, against India, to break the record for most Test hundreds for England. Also became the youngest player to pass 7,000 Test runs and was named as one of Wisden's Cricketers of the Year.

*Led England to the final of the 2013 Champions Trophy, losing to India. He lost the one-day captaincy and a place in the 2015 World Cup squad after a poor run of form.

*Captained England to a 3-0 home Ashes win in 2013, but a 5-0 whitewash Down Under led to criticism of his captaincy.

*Passed Graham Gooch's 8,900-run tally during the 2015 series against New Zealand to become England's most leading run scorer in Tests.

*Led England to a surprise 3-2 Ashes win in 2015 and was named as captain of the ICC's Test team of the year. 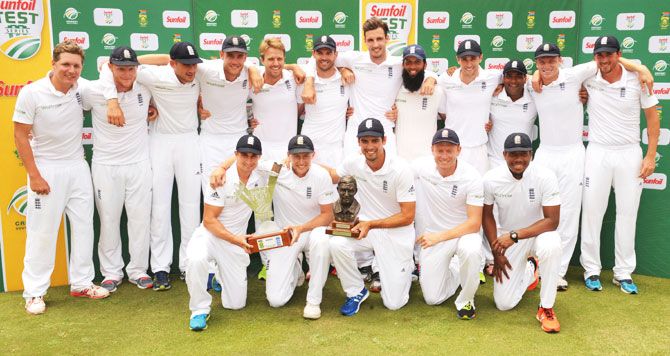 IMAGE: England during on Day 5 of the 4th Test match between South Africa and England at SuperSport Stadium on January 26, 2016 in Centurion, South Africa. Photograph: Lee Warren/Gallo Images/Getty Images

*Captained England to a 2-1 Test series win in South Africa in 2016 against a team then ranked No1 in the world.

*In May 2016 became the first English batsman and the 12th player from any country to score 10,000 runs in Test matches.

*Stepped down as England Test captain in February 2017 after an embarrassing 4-0 series loss in India at the end of 2016.

© Copyright 2022 Reuters Limited. All rights reserved. Republication or redistribution of Reuters content, including by framing or similar means, is expressly prohibited without the prior written consent of Reuters. Reuters shall not be liable for any errors or delays in the content, or for any actions taken in reliance thereon.
Related News: England, International Cricket Council, Alastair Cook, India, IMAGE
COMMENT
Print this article 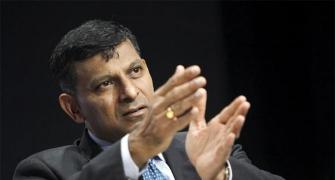 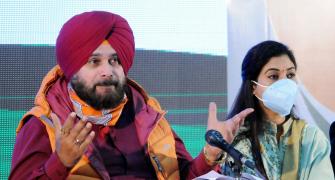