Agarwal credits Dravid for instilling confidence in his batting

Survives sharp bowling to notch up another half-ton 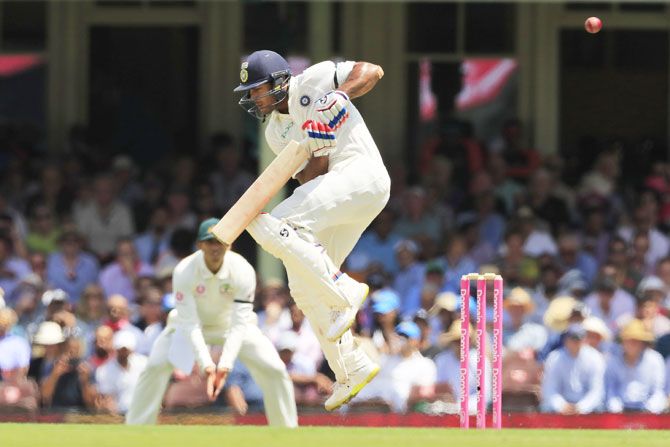 IMAGE: Mayank Agarwal takes evasive action as he tries to fend off a short ball during his innings on Day 1 of the 4th Test in Sydney on Thursday. Photograph: Mark Evans/Getty Images

Cheteshwar Pujara grabbed the headlines on Thursday with his third century of the series against Australia but Mayank Agarwal's innings of 77 was another bright spot for India on a day when pretty much everything went right for the tourists.

India might be riding high at number one on the world Test rankings, and on the evidence of day one at the Sydney Cricket Ground look set to win a first Test series in Australia, but the opening partnership has been a problematic area.

Teenager Prithvi Shaw pretty much nailed down one opening spot with his Player of the Series effort against West Indies in October but suffered the misfortune of a serious ankle injury in the warm-up match for this series.

Agarwal, a mainstay of the Karnataka and India A sides, was called up for his debut after India lost the second Test in Perth and made the most of his chance with innings of 76 and 42 as the tourists crushed Australia in Melbourne. 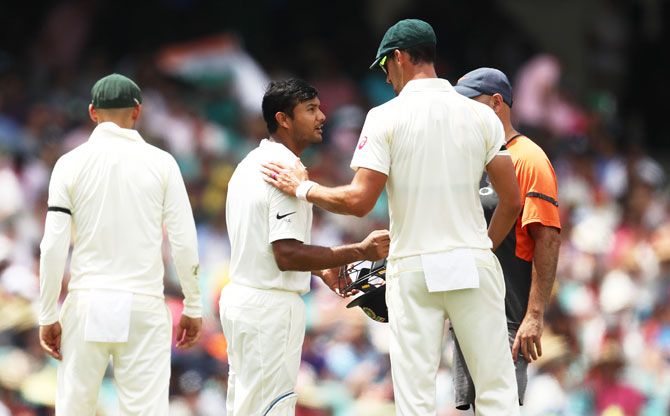 IMAGE: Mitchell Starc checks on Mayank Agarwal after the latter was struck on the helmet. Photograph: Ryan Pierse/Getty Images

On Thursday at the Sydney Cricket Ground, he again showed great control and no little courage, brushing off blows to his elbow and helmet as the Australian pacemen subjected him to a barrage the likes of which he had never faced before.

"Recently I faced such short bowling from New Zealand A side (in New Zealand). They also came very hard, but to be really honest, I think the Australian pace bowling attack came really, really hard. They bowled quick bouncers and they were sharp. They were consistent and didn't give anything away," he said.

"The plan was always to get a small partnership after each wicket and that's the same thing we spoke about. We said to each other that let's try to play close to the body and not give them wickets. Even if we are not getting too many runs too quick, it's alright; let's try get a partnership and take it from there onwards," he added.

He survived to reach the half-century mark by punching the ball through the covers for four to become only the third Indian opener after Sunil Gavaskar and Shaw to score fifties in two of their first three Test innings.

His prospects of retaining his spot were not hurt by his opening partner KL Rahul -- recalled in place of Rohit Sharma after being dropped in the wake of the Perth defeat -- giving up his wicket for nine runs in the second over of the day. 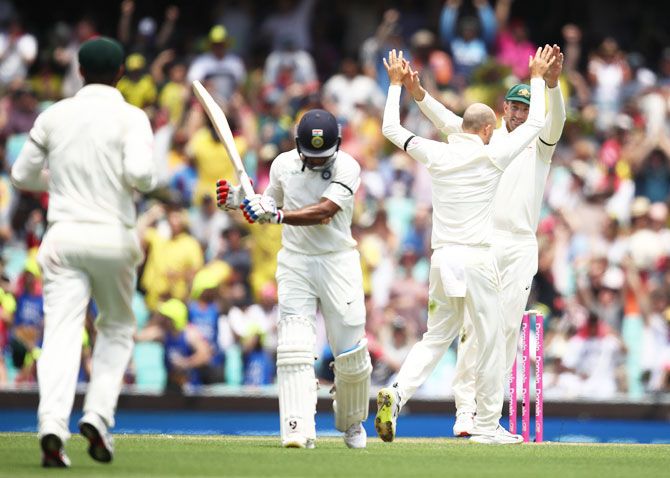 India's sometimes hyper-critical fan base has been tired of the continual failures of the openers but those same critics are also likely to have something to say about the way Agarwal's innings ended.

After reaching the half century mark, he immediately started playing more expansive strokes, highlighted by two sixes off Nathan Lyon to long-on that helped take his partnership with Pujara to 116 runs.

An attempt at a third was pushing his luck against an experienced campaigner like Lyon and the off-spinner delivered a slightly shorter ball which Agarwal skied to long-on fielder Mitchell Starc.

"I was looking to dominate but it didn't work out," Agarwal conceded.

"I am quite disappointed for missing out on a big score, and I guess I'm really disappointed that I threw my wicket (away).

"That said, it's a learning curve. If I don't make that mistake again then it'll be a good lesson." 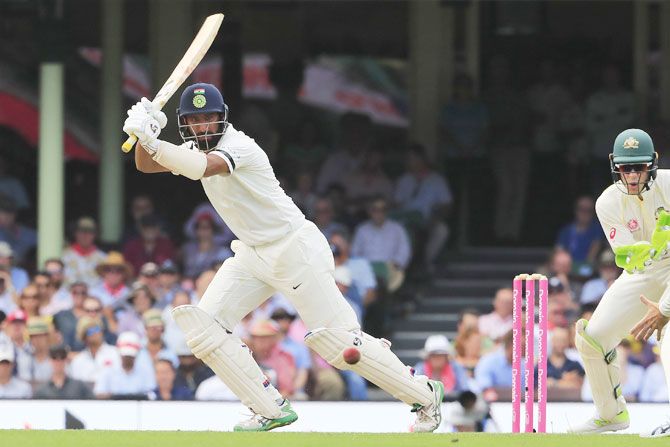 Pujara was unbeaten on 130 runs at stumps, having faced 250 balls, the fourth time he has played 200-plus deliveries in an innings on this tour. Agarwal talked about learning from his batting style and showered heady praise on the senior batsman who scored his third hundred of the series on Thursday.

"Definitely, it is great to watch him bat from the other end and also to watch him bat the way he grinds the bowlers. He has got a pattern to it and he understands his strengths and know that he is very tight with his defence. He looks to do that and waits for the bad ball to come.

"This game is for five days and there is time. It is a very long game and if you see him bat, you can learn a lot. Patience is his strength and he sticks to that," he said. 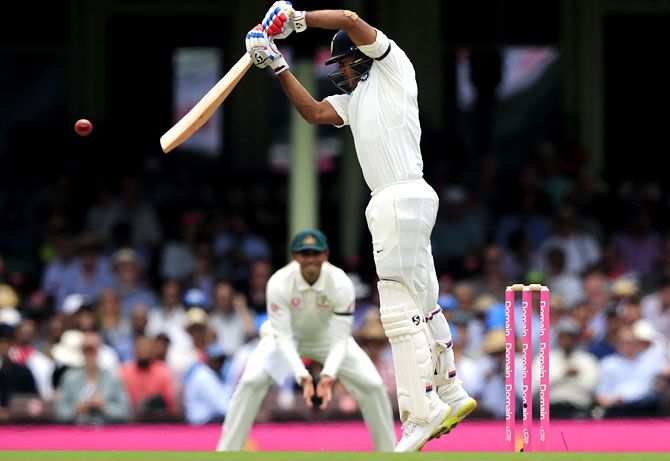 IMAGE: Mayank Agarwal hits a boundary through the off-side on Day 1 of the 4th Test. Photograph: Mark Evans/Getty Images

For Agarwal too though, this was an additional confidence booster after his showing in the debut Test at Melbourne. He credited Rahul Dravid for instilling confidence in him.

"Obviously playing under Dravid is good. We, as batsmen, speak about our technique and the game, and he is out there to help us, guide us and help us climb the ladder. And his advice has been really helpful. He told me to think about how to manage my mental energy and that's something we have spoken about for 4-6 months."

Talking about the course of this Test on the second day, Agarwal said, "We are very happy, we would have liked to be just three down but that said 303-4 on first day after choosing to bat, I think we are in a great position." 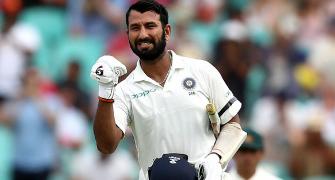 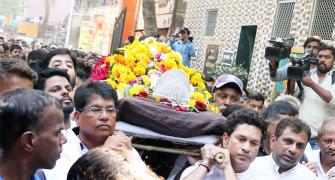 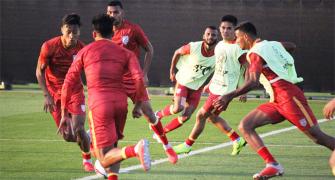 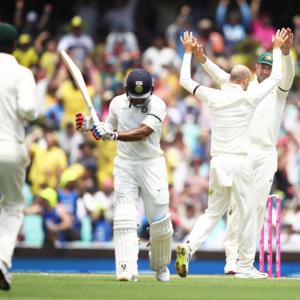 Heartbroken coach expects Agarwal to learn from his silly dismissal 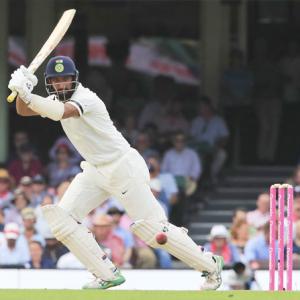