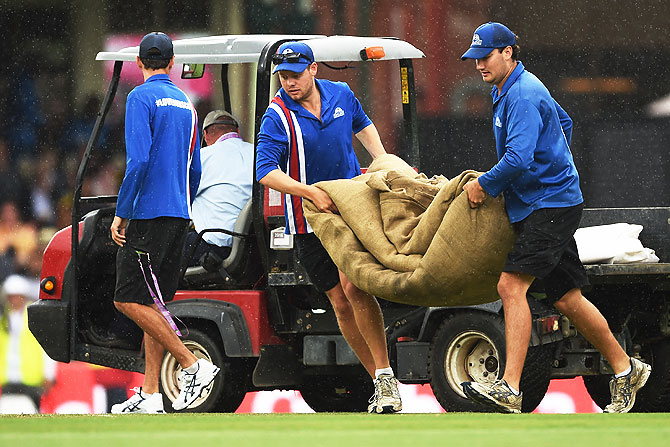 IMAGE: Groundsmen bring the covers on as rain delays play on Day 2 of the third Test match between Australia and the West Indies at Sydney Cricket Ground in Sydney on Monday. Photograph: Cameron Spencer/Getty Images

Carlos Brathwaite shone briefly for West Indies but the rain was the only real winner on Monday as wet weather washed away all but 11.2 overs of play on the second day of the third Test against Australia.

West Indies were 248 for seven in their first innings when the rain interrupted play for the third and final time half an hour after lunch in the wake of Brathwaite's dismissal for 69.

Play was officially abandoned at 4:35 p.m. (0535 GMT) as the rain continued to cascade down on Sydney Cricket Ground with the 14,266 optimistic souls who came through the gates despite the gloomy forecast offered a full refund.

That meant that the flurry of boundaries with which Brathwaite lit up the few overs of action was ultimately a free show and the 27-year-old was warmly applauded for it by an appreciative crowd.

Resuming on 35 with his team on 207 for six, the tall, muscular Bajan showed why he has been one of the few bright spots for West Indies on what has otherwise been a miserable tour.

Playing his second Test after scoring 59 on debut in Melbourne last week, Brathwaite smashed four sixes and seven fours in his 71-ball innings. 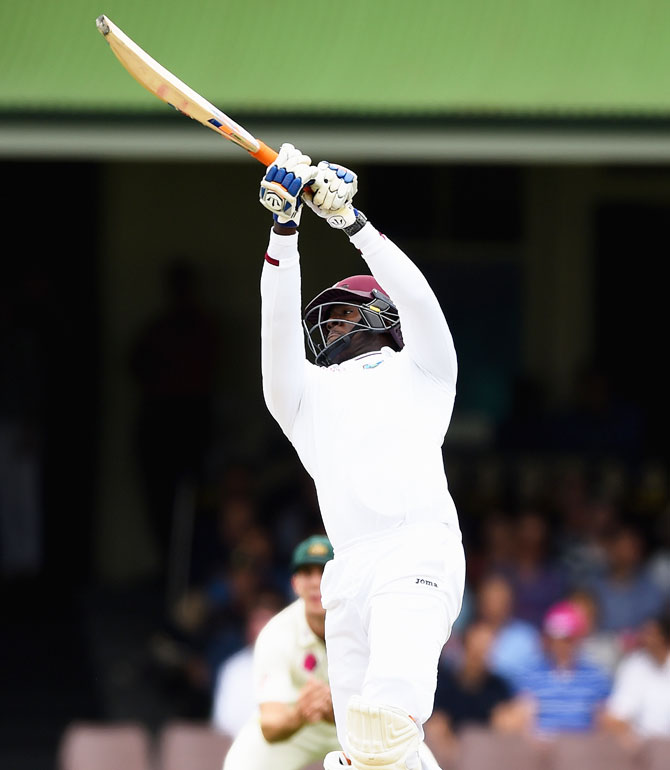 One of the two sixes he hit in one over off Australia paceman James Pattinson was a spectacular heave over the covers and deep into the crowd.

A fuming Pattinson had his revenge, however, when he found his range and took out Brathwaite's off stump with what the batsman described as a "good nut".

"I was upset that once again I got a start and couldn't carry on. One of the main mantras in cricket is that when things are going good you maximize," Brathwaite said.

"Then reaching halfway off and hearing the applause -- I even saw some people standing -- I just took a step back and said 'you know what, just enjoy the feeling'. I raised my bat and looked around and it was a very, very good feeling ..."

Denesh Ramdin will resume on 30 not out for West Indies alongside Kemar Roach, who has yet to score, on day three.

Only three balls were bowled in the first two hours of scheduled play and another 21 before lunch after the action resumed briefly at noon.

Nearly three hours of play were lost to rain on day one of the match, a dead rubber after Australia racked up convincing victories in the first two Tests.

Australian spinner Stephen O'Keefe said he thought there was still time for the hosts to force a result.

"There's still a hell of a lot of cricket to go," he said.

"If you can get three days in then that's close to 300 overs.

"Hopefully if the skipper sees that spin will play a big role then we might get more overs in towards the back end of the match."

© Copyright 2020 Reuters Limited. All rights reserved. Republication or redistribution of Reuters content, including by framing or similar means, is expressly prohibited without the prior written consent of Reuters. Reuters shall not be liable for any errors or delays in the content, or for any actions taken in reliance thereon.
Related News: Carlos Brathwaite, Sydney Cricket Ground, West Indies, Getty Images, James Pattinson
SHARE THIS STORYCOMMENT
Print this article 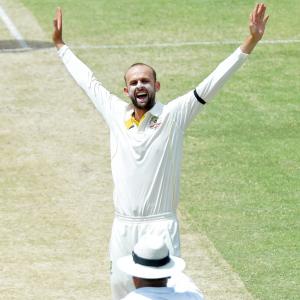