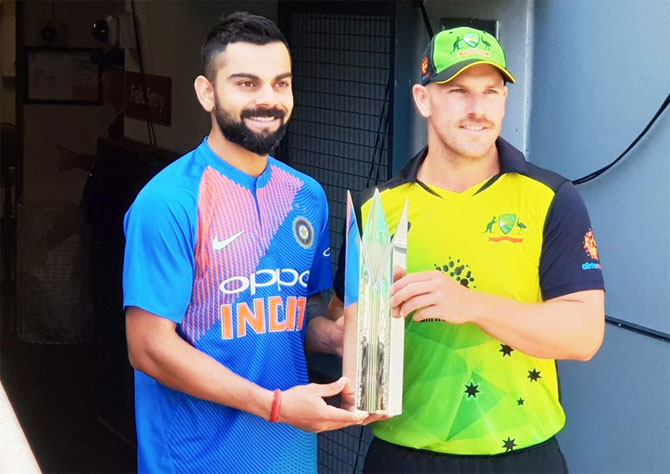 IMAGE: India captain Virat Kohli and Australia captain Aaron Finch pose with the T20 Trophy on the eve of the first T20 in Brisbane on Tuesday. Photograph: Text

The mess that Australian cricket has found itself in, both on and off the field, has made India firm favourites in the compelling rivalry's latest battle, which begins with a T20 International series in Brisbane on Wednesday.

In a bid to assert themselves as favourites for the Test series, which starts December 6 in Adelaide, India would like to dominate the three T20Is.

The touring side has won their previous seven T20I series dating back to November 2017, and their last defeat in the format was against West Indies in July last year.

Not to mention, on their last visit to Australia, the Men in Blue won the T20I series 3-0. So, they will be riding high on a wave of confidence and eager to make an early mark on this trip.

Australian cricket, in contrast, has been dogged by structural reform in the wake of the ball-tampering saga in South Africa in March and it has resulted in turbulence on the field as well.

On Tuesday, Cricket Australia ruled out reducing the bans of Steve Smith, David Warner and Cameron Bancroft in reply to a plea submission from the Australian Cricketers' Association (ACA).

In the absence of Smith and Warner, Australia's results have fallen off a cliff.

Since the ban in March, the Aussies are yet to win a T20I series against an opposition of note.

They lost to England in a one-off game in June, then lost to Pakistan in the T20I tri-series final in Zimbabwe, lost 3-0 to Pakistan again in the bilateral series in the UAE, and then lost to South Africa in a rain-curtailed one-off match on Saturday.

It remains to be seen whether being on home turf would raise the spirits for the once invincible Aussies.

All eyes will be on how the Aaron Finch-led Australian side deals with the best batsman in world cricket at the moment as India captain returns to the squad.

While there are calls from all quarters for Australian cricket to keep a check on aggression and play the game in right spirit, Kohli has always garnered attention whenever he has visited Australia.

On his early trips Down Under, he has never quite been the Australian fans' favourite.

But starting 2014, his batting exploits have taken centre-stage. He scored 199 runs in three innings during that 2016 T20I series' whitewash.

South African skipper Faf du Plessis has professed a "silent treatment" to Kohli and it remains to be seen if the Australian cricketers and the public can ignore him at all.

Starting off with the aggressive shortest format is Australia's best bet to upset India's plans for this summer of cricket, wherein unlike their prior trips here, the visitors are already considered the better side in all departments. Besides Kohli, Aussies must be wary of this Indian batsman Blow for Smith, Warner as no respite offered 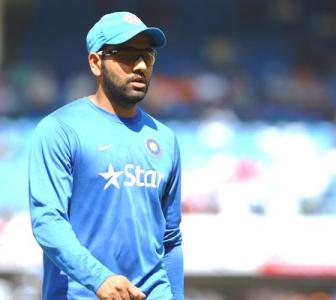 'We want to seize all moments, leave a mark in Australia this time' Australia get Khawaja boost as recuperation on course