News
Business
Movies
Sports
Cricket
Get Ahead
Money Tips
Shopping
Sign in  |  Create a Rediffmail account
Rediff.com  » Cricket » 'I will never claim I was the man who made Rohit Sharma'

'Rohit had so much talent that he would have made it anyhow, under any coach, but I am happy I was able to guide him.' 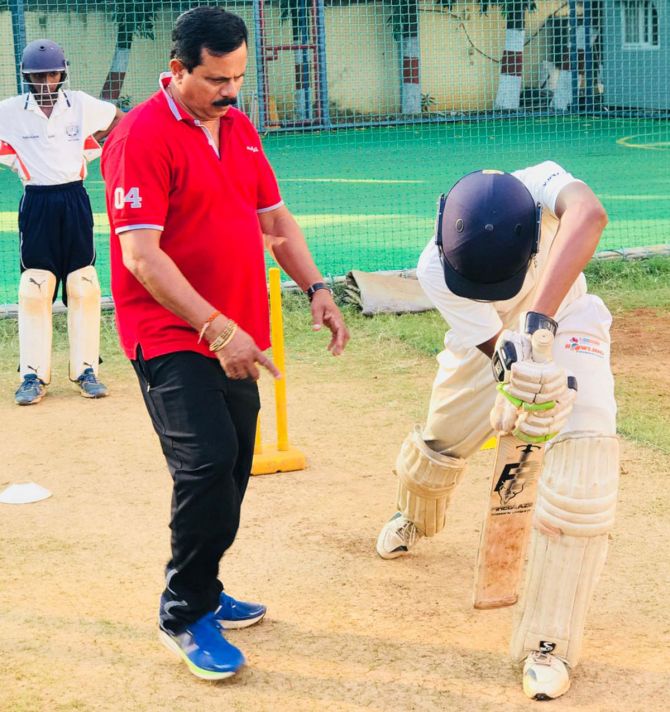 IMAGE: Dinesh Lad, who will be presented the prestigious Dronacharya Award for his contribution to cricket in New Delhi next week, works with a young batter in the nets. Photograph: Kind courtesy Dinesh Lad

The normally composed Dinesh Lad is a delighted man these days!

After years and years of hard work, his achievements have finally been recognised as he was awarded the prestigious Lifetime Dronacharya Award for 2022 for his contribution to cricket.

Lad is popularly known as Rohit Sharma's coach but in Mumbai's cricketing circles he has been the lifeline for countless young cricketers, providing free coaching for 26 years now and has even gone out of his way to accomodate some of them at his residence, while getting the school fees waived off for the needy ones.

Lad was first impressed by Rohit's bowling skills in school level cricket, but it was not long before his batting prowess came to the fore and under his coach's tutelage he set out on the journey to become one of the world's best batters in white ball cricket.

Rohit nearly missed the bus as his family felt the fees at the Swami Vivekananda School -- where Lad was coaching -- was too high and they initially decided against shifting him to the school.

It was Lad's quick intervention which saved the day for Indian cricket as he got the school's director to waive off Rohit's fees so he could get top level coaching at a young age and the rest is history.

Lad has coached many young cricketers in Mumbai for the last 26 years without charging a single rupee at the Swami Vivekananada School in Borivli, north west Mumbai. His son Siddhesh Lad also played for Mumbai for nine years in the Ranji Trophy before moving to Goa earlier this year.

Lad, who has also coached Shardul Thakur and has produced nearly 100 cricketers for Mumbai cricket, has not played first class cricket and also failed the Level-1 coaching exam in 2005.

Working under the legendary Ramakant Achrekar for a few years, he says was instrumental in learning the tricks of the trade. Achrekar was the last cricket coach from Mumbai to win the Dronacharya Award way back in 1990.

Lad will be conferred with the Dronacharya Award by President Draupadi Murmu at Rashtrapati Bhawan on November 30.

"I can easily earn around Rs 50 lakh to Rs 60 lakh per month, I only need to assure the parents that their kid will go on to play in the IPL and they will readily pay me any amount, but I don't do that because I am not into coaching to make money," Dinesh Lad, who currently coaches the Mumbai Under-14 team, tells Harish Kotian/Rediff.com.

The first of a fascinating two-part interview!

You have coached Rohit Sharma and Shardul Thakur. Countless of your wards have gone on to play for Mumbai in the Ranji Trophy, yet you are someone who likes to stay in the background.
What is it like to win the prestigious Lifetime Dronacharya Award for your contribution to cricket?

Definitely, it is a special feeling. It is a big thing to get the Dronacharya Award, it is the biggest achievement of my life. What more can a coach ask for? I am the happiest person in the world.

Take us through your coaching journey which started nearly three decades ago.

In 1993, one of my friends (Nitin Parulekar) asked me to start coaching at Prabhodhan Krida Bhavan in Goregaon (northwest Mumbai), that time I was employed with Western Railways. I was 32. I told him I have no idea about coaching, he told me not to worry, just come and give some catching practice. Those days we used to get half a day off when we went for coaching. There were some camps organised around Mumbai by Prabhodhan, so I was given a batch of 25 children and I was to be paid Rs 550.

The camp finished at the end of May and from the Rs 550 I was given, my friend borrowed Rs 400 and the remaining money I threw a party for my friends so that money finished in one day.

So in 1993 I started coaching regularly in Goregaon at one of the camps for Western Railways. I used to go daily to coach children from 3-5 pm and that was my routine in those days.

Then in 1995, a new school started -- Swami Vivekananda in Borivli. My son Siddhesh had got admission in that school. The director of the school, Mr Yogesh Patel, was speaking to my son Siddhesh, who was two-and-a-half years old then. He also chatted with me and asked what I was doing and all that.

It was then that I asked Mr Patel why don't we start cricket coaching in this school? He immediately agreed and asked me how much I would charge. I said I won't charge any money and we started the coaching programme in the school, which was inaugurated by Pravin Amre.

We used to practice cricket at a nearby ground as the school building construction was still going on, so that is how my school coaching career started.

I used to observe Surve Sir who was coaching at Railways when I started coaching there in 1993 and I learnt a lot from him plus I had good knowledge of cricket.

In 1995, when my school team participated in an inter-school tournament, I remember our opposition team had posted around 550 runs in 45 overs and we could manage only 180 in reply.

I was still coaching the young kids at the Western Railway camp in Mumbai so I managed to convince a few parents that their child was good at cricket and they should get them admitted to the Swami Vivekananda School, where I was coaching too.

And from our school team, one player called Siddharth Sharma was picked for the Mumbai Under-14 team in 1997.

The biggest turning point of my career came a year later. We beat a strong Shardashram Vidyamandir School in the quarter-finals of the Harris Shield. I remember my guru Ramakant Achrekar was sitting next to me. He patted me on the back and told me, 'Well done'.

That 'Well done' turned around my life because there was no looking back from that point onwards.

I coached the Mumbai Under-12 team. I had 25 kids under me out of which around 18 went on to play for Mumbai including under-14, under-18 and the Ranji team.

I think around 90 boys from my school have played for Mumbai at some level. One of your biggest finds as coach was Rohit Sharma. How did you unearth one of the biggest superstars of Indian cricket in a coaching camp in Borivli, far away from Mumbai's most sought-after cricketing spots like Shivaji Park or Azad Maidan?

I was organising camps for young boys in Borivli in April-May and there I saw Rohit for the first time when he scored 60-odd against our school team.

I must tell you I was impressed by his bowling in that match. He bowled 2 overs, because it was a 10 over match.

After the match I told him to ask his parents to meet me. Rohit was staying with his uncle in Borivli because his parents were residing at Dombivili (a township near Mumbai).

I told his uncle I was impressed by Rohit and told him to admit the boy to the Swami Vivekananda School where I was coaching.

He was 12 years then. They both came to our school and filled in all the forms. I spoke to the school director also. But when his uncle found out that the school fee was Rs 275 (per month) he thanked me and told me he is leaving because they don't want to admit Rohit in this school.

I tried to convince them saying 'It is difficult to get admission to this school. I have even got the deposit waived off. Why are you refusing to put Rohit in this school?'

I felt Rohit should somehow join this school only and didn't want to let him go. I went to the director and told him we should admit Rohit in the school for free and somehow I managed to convince him.

I know he agreed because he believed in me. I had never taken a single rupee for coaching in the school and I still don't charge any money for my services after nearly 30 years.

Rohit was just 12 then, he was in the seventh standard. I made him play in the Giles Shield and Harris Shield tournaments, but we lost in the second round.

The very next year, Rohit was bowling well. I remember entering the ground and saw one guy doing some knocking.

I saw the boy was playing with a straight bat and hitting some good shots. I went close and saw that it was Rohit, who was batting in the nets. I was surprised and told him, 'You bat so well' and he just smiled.

I started to make him bat at No 4 in the coming matches. He was doing well in the middle order and played some good knocks.

Then one day I asked him whether he would open the batting in the Giles Shield. He was very happy and agreed immediately.

He made 140 runs in that match and I would say that that innings was the turning point for Rohit. After that I gave a lot of time to his batting.

I would myself bowl at him in the nets. In those days we had cement wickets, I used to bowl the new ball at him from 16 yards, so that helped him learn the pull shot.

I want to say he was a natural talent. I will never claim I was the man who made Rohit Sharma. I have only guided him and helped him.

He had so much talent that I think he would have made it anyhow, under any coach, but I am happy I was able to guide him.

I feel delighted when Rohit once said he was a bowler when he started playing, but his coach made him a batter.

Did you ever imagine back then that he would go on to become one of the great batters in white ball cricket?

I always believed when I started working with Rohit that he would play at a higher level, but I didn't think about him playing for India then.

In one season, he had hit around 7-8 hundreds in the Harris Shield and some other tournament, then I got a feeling that Rohit would go on to play at the next level.

He worked hard to fulfill his potential and that is why he has become such a big player for India. I would only say that I guided him along the way and played my part. 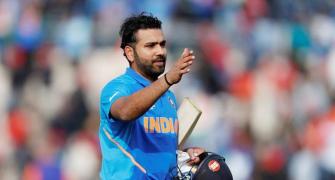 Rohit can win WC for India, says his coach 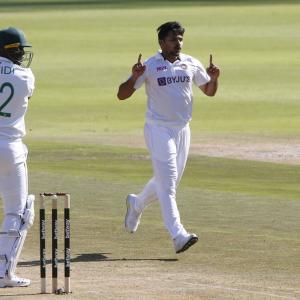