Between the years 2004-05, when the United Progressive Alliance took charge at the Centre, and 2011-12, a span of seven years, out of every incremental rupee generated by the country as GDP, nine paise, or a little over 9 per cent, has been given away as subsidy by this government.

No, this is not a poor joke. A full nine pc, if not more, of all incremental output over the last seven years, is now being disbursed as subsidies to some lobby group or the other.

How can any country survive such profligacy and for how long?

But first, let us consider the numbers themselves which are given in the attached spreadsheet. Between 2004-05 and 2011-12, the GDP grew by a little over 75 pc. The growth rate during the period, a shade under 9 pc in real terms, was truly respectable. However, in the same period, subsidies to various groups grew by 396 pc.

At the end of 2004-05, total subsidies as a %age of GDP stood at 1.73 pc, a respectably "safe and sustainable" level that the UPA government inherited from National Democratic Alliance. By 2011-12, subsidies had shot up to 4.9 pc of the GDP. Note, India went bankrupt in 1990 when subsidies reached almost 3.5 pc of the GDP. We are now already at nearly 5 pc of GDP.

Note, the above figures do not include hard-to-calculate cross-subsidies such as those given to farmers on power, under-recoveries of service charges in government services and mispricing of such resources as water to households and farmers. If these are taken into account, the subsidies would be much larger than the figures given here. The enormous distortion in general prices by such a high level of subsidies is simply mind-boggling.

As noted earlier, the UPA government inherited a fairly low and sustainable level of gross subsidies and fiscal deficit from its predecessor NDA government. 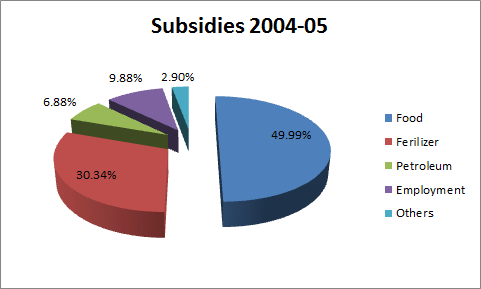 The mess that we are in is therefore entirely due to the utterly irresponsible way in which the UPA has cravenly caved in to demands for handouts from various pressure groups. What is astounding is that almost 10 pc of all incremental output from the economy over the last seven years is being doled out as a handout to some claimant or the other.

Why has the UPA government been so supine to pressure groups, given that it is the one that claims to be for reforming the economy and cutting out subsidies? What went wrong? 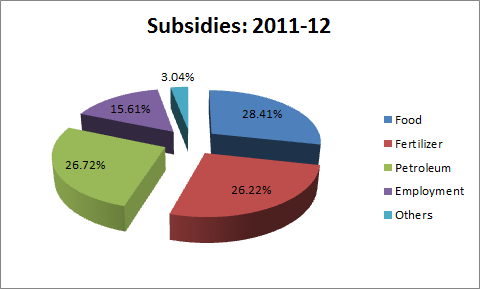 Note, just about R3500 crores is spent on fuel subsidies to below the poverty line families, and over the years this figure is shrinking. Most of the petroleum subsidy, now totaling R68,481 crores, goes to the middle and upper classes, including diesel subsidy to transport operators who by no means can be classified as poor.

Likewise, much of the fertiliser subsidy goes to the corporate sector, be it as production subsidy to urea manufacturers or to DAP importers. If the subsidies were really intended for farmers, this can and should go directly to farmers but by design it doesn't reach there.

For this analysis, we have assumed about 65 pc of the food subsidy goes to the actual poor rather than leaking to the middle class. 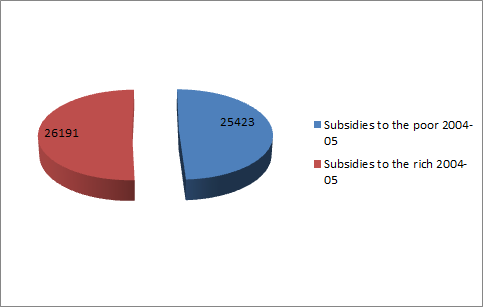 Note, of all the subsidies, only employment assurance does not "leak" if implemented honestly. The government pretends it isn't subsidy in the first place. But the effort hardly creates any assets and leak it does albeit through corruption. But we have assumed all of it does go to the poor.

Note, a little less than half the subsidy as at the end of 2004-05 did reach the poor. Below is the data pertaining to 2011-12; the UPA's gorgeous pro-poor record in its entire splendour. 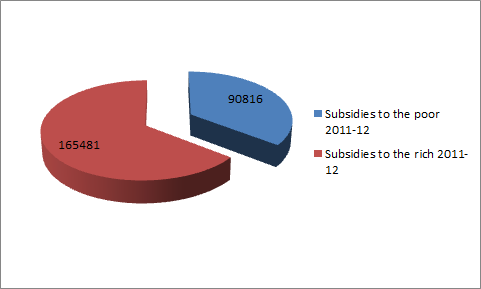 Lo and behold the UPA magic. The share of the poor, in whose name all subsidy is created by liberal bleeding hearts, has shrunk from a little under half to just about a third.  Mind, total subsidy during the period grew by 396 pc  and the share of the poor shrank from half to one-third!

What of the well-off? As usual, they had smuggled themselves into the subsidy trough under the guise of the ubiquitous "common man" to grab over two-thirds of all subsidy after it had nearly quadrupled from the level prevailing in 2004-05. Yet, this very class of people is on Twitter screaming itself hoarse about inordinate increase in food subsidies for the poor or the inequity of MNREGA. Hypocrisy thy name is our vocal middle class,

Sonia Gandhi, and her Marxist kitchen cabinet at the National Advisory Council, may note that they have been roundly beaten in the subsidy game by the government using the guise of "common man". While MNREGA and Food Security Act etc require positive acts of Parliament to get through, open-ended subsidies like petroleum and fertiliser need positive acts from the government to check. If the government does nothing, as is UPA's wont, petroleum and fertiliser subsidies will increase merrily while Food Security Act languishes. The NAC has been outflanked by crowding it out of the subsidy trough.

We do not support open-ended subsidies of any kind, be it food or unemployment mitigation schemes. Subsidies should be merely a way of supporting people in training to integrate them into the mainstream economy. Farmers can well be compensated for higher fertiliser costs through higher support prices for produce. The reason this is not done is simply because the corporate sector would be deprived of its nest egg in the shape of assured post tax returns on net worth.

Similar is the case of petroleum subsidies and assured post-tax returns to refineries.  While it is difficult to explore the ridiculousness of the government's assured post-tax return on net worth here, we may note that the formula is open-ended in time. If a fertiliser plant or refinery's entire plant is depreciated in say 10 to 15 years, then the subsidy on the same should also end in a similar period of time. Instead, the subsidy continues in perpetuity!

That is the dirty little secret of assured post-tax return and why the corporate sector loves the scheme. One wonders why the government has not woken up to the implications.

Subsidies need to be brought down to about 1.50 pc of GDP immediately if we are to avoid bankruptcy.  The government itself promises to bring subsidies down to 1.90 pc by the end of 2013. How that may be accomplished with a looming draught and falling growth rate is uncertain. We will return to this topic in another article.

Time Sonia Gandhi, government and the opposition, woke up to the imminent disaster.  Subsidies now total 4.90 pc of GDP and about 10 pc of all incremental output is being eaten up by subsidies. If reforms are not forced through, and petroleum subsidies cut to zero forthwith, the country does not have the reserves to last beyond 2013-14.

Whosoever takes over the government in 2014 will have a bankrupt economy with no latitude for any manoeuvre. If we do not reform now, the UPA will follow a scorched earth strategy in the ensuing election year in a bid to garner as many seats as possible.

So it is in the interest of all parties, no matter who wins 2014, to reform now and compete for votes on some other basis.

Stalling reforms is not an option anymore.