'Modi wants to do away with permanent government jobs'

The new government order to review the service record of employees who have completed 30 years in the job to identify inefficient or corrupt staff and retire them prematurely has invited the ire of labour unions, who believe that this is a step towards privatisation.
Syed Firdaus Ashraf/Rediff.com reports. 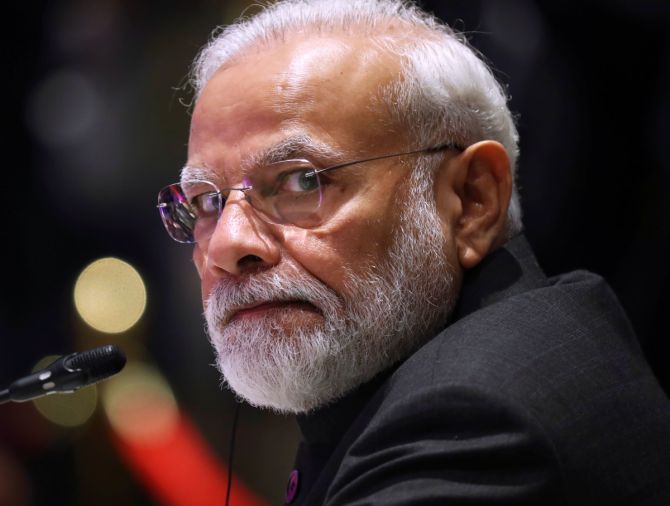 In a major development, the Narendra Modi-led government has asked all its departments to review the service records of employees who have completed 30 years in the job to identify inefficient or corrupt staff and retire them prematurely in the public interest, according to a personnel ministry order (external link).

According to the order issued by the personnel ministry, at any time after a government servant has attained the age of 50/55 years or completed 30 years of service, as the case may be, s/he may be retired prematurely in the public interest.

The order has not sat well with labour unions whose representatives believe that this move is a step towards privatisation and doing away with permanent jobs in the government sector.

"This is nothing, but one step forward to privatisation of government jobs," says Prem Chand, general secretary, Indian Public Service Employees Federation.

Voicing his concern, Prem Chand adds, "This government is acting like a manager and implementing the rule of crony capitalists, who are the real owners of this government. Look at BSNL, what they have turned this once profitable company into."

"We will oppose any such move on the ground if the government goes ahead with its plans."

The rule, ,em>per se, isn't new -- in fact, it dates back to 1972. However, it has almost never been implemented at the ground level.

"Yes, it is an old rule from 1972 and was never implemented strictly," points out Shiv Gopal Mishra, general secretary, All India Railway Federation.

"In my life, I have not seen more than 20 people being sacked for being corrupt or being inefficient after working for 30 years."

As of now, the employees' performance review is conducted under the Fundamental Rule (FR) 56 (J) and 56 (I), and also under Rule 48 (1) (b) of the Central Civil Services (Pension) Rules, 1972, that gives an absolute right to the appropriate authority to retire a government servant if it is necessary to do so in the public interest.

Amarjeet Kaur, general secretary, All India Trade Union Congress, believes that the Centre has made an addition to this clause, which allows the government on its own to decide if an employee has been inefficient and can be sacked.

"This rule is very old, and the government has rarely ever used it. Imagine if for 35 years you have been an efficient government worker and one fine day you come to know the government is saying you are inefficient," says Kaur.

"I feel this new order is very punitive and is vindictive."

"Who will decide you are corrupt unless an inquiry is set up?" Kaur asks. "Earlier, one could challenge these things, but now the government does not want you to challenge it. This entire step is to bring in contractual jobs."

"The Modi government wants to do away with permanent jobs."

According to Kaur, this move stems from then finance minister Arun Jaitley's idea of fixed term employment. "He wanted fixed hours, fixed months or fixed years for employment. And once your term is over your job goes. This was the role model of government employment.

When pointed out that this was the practice followed widely by the private sector, Kaur says, "The government sector is supposed to be a role model for employment. If the government fails to provide job security, who will give it?"

<p "And if the government throws its employees out on the roads after working for 35 years, who will fight for job security in the private sector?"

"We had job insecurity during the British days and we fought and got our Independence. Now, the government wants you to go back to those days," says Kaur. "Uncertainty in jobs has become a certainty of jobs under the Modi government and we will not accept this. We will fight against such rules.

"There are 7.5 lakh vacancies in government jobs, but they are not interested in filling those posts and instead want to reduce more government jobs by bringing in such laws!" says Shiv Gopal Mishra.

"During the pandemic," Mishra points out, "it was only government hospitals that were working, government buses that were running and even the government airline was flying. So, to say that government employees don’t work is a ridiculous argument." 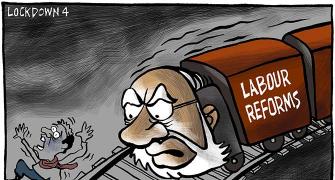