For all those auto enthusiasts who thought Mahindra have only been manufacturing Jeeps and trucks in the '90s, Timeless Mahindra offers plenty of interesting surprises, discovers Rajesh Kareka/Rediff.com. 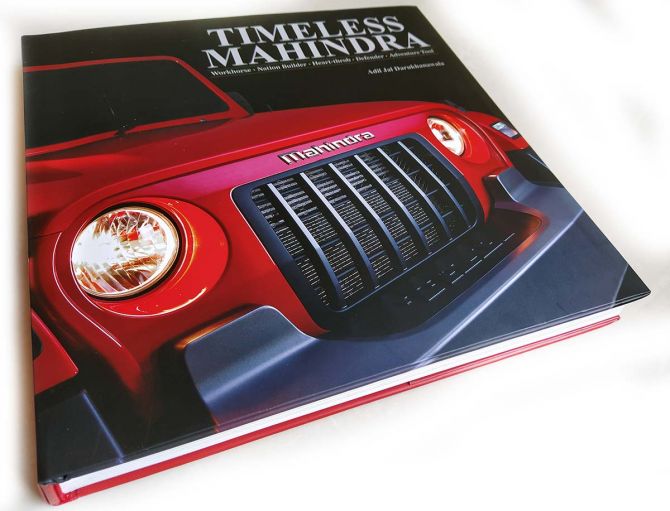 I'm crazy about cars, but books are not really up my alley.

However, when auto journalist Adil Jal Darukhanawala dives into the world of Jeeps with a spectacular coffee table book, Timeless Mahindra, I couldn't resist jumping in.

The book is much more than a paean to Mahindra Jeeps; it showcases India over the years as well. 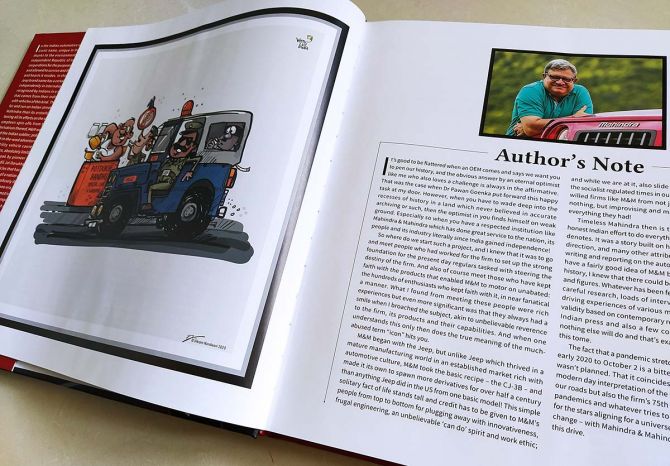 Aptly made into a coffee table book, it starts with Mario Miranda-inspired drawings by Vikram Nandwani, who has been showcasing his caricature series on daily life in India since 2017.

A foreword by Mahindra Chairman Anand Mahindra sets the tone for a tribute to the Thar and its spirit to survive. 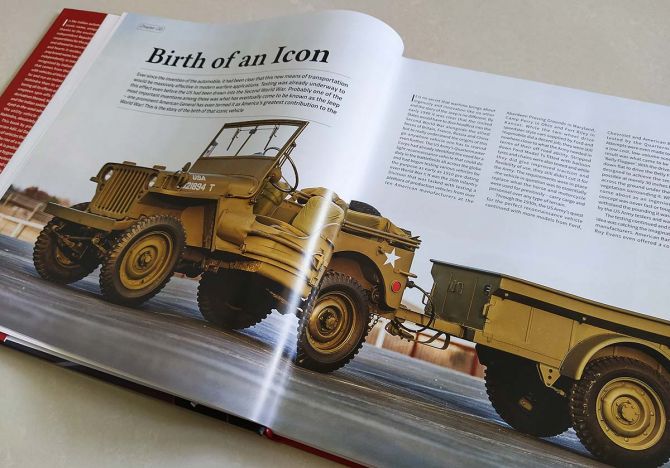 The journey begins in the 1940s and, boy, are there some eye-opening facts and visuals!

Here are some photographic glimpses from the book, kind courtesy Adil Jal Darukhanawala. 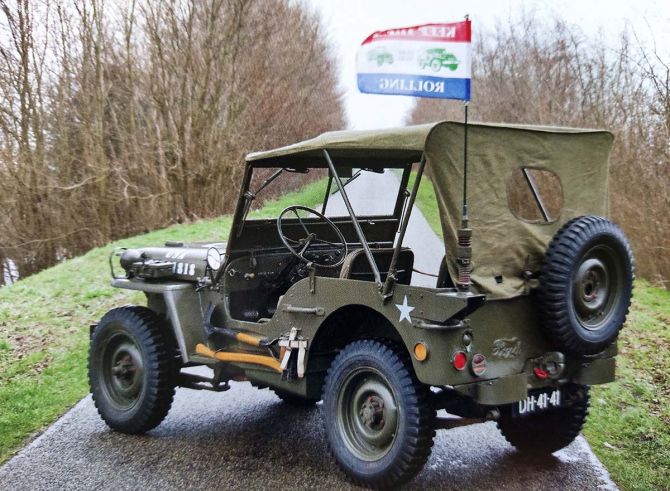 Another manufacturer tried his hand at the Jeep. See the badge?

Darukhanawala peppers the book with such nuggets.

This picture above shows a 1942 GPW. When Ford was roped in to manufacture the Willys MB to Willy's specifications, they badged the company name all over it until the US army ordered Ford to desist. 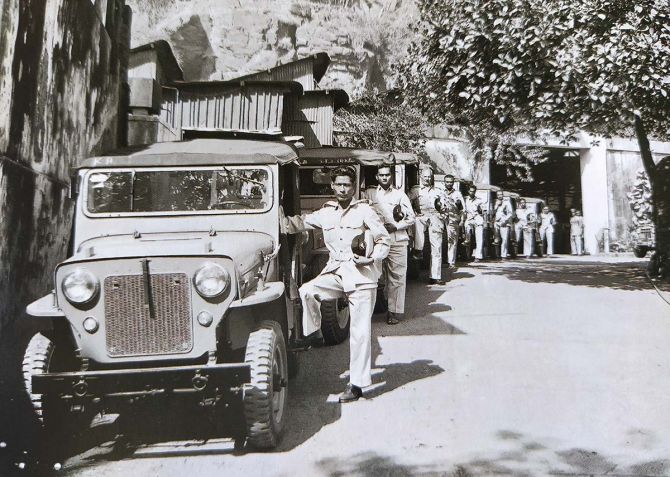 Darukhanawala takes us back to the first Mahindra Jeep built in India and its impact on the country.

This is an image from Mahindra & Mahindra's Kandivali, north west Mumbai, plant, from where the Hurricane petrol engine-powered Jeeps rolled out. 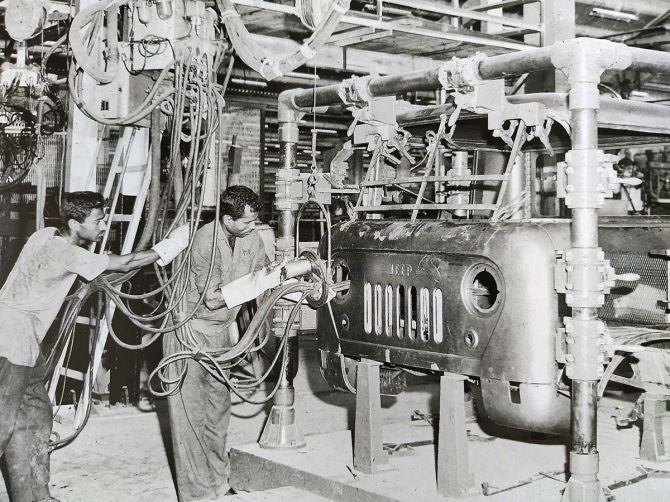 And it wasn't just Jeeps and cars that were being built at the Kandivali facility.

This photograph shows a single jig where body panels of a truck were clamped on before the welders got into the act. 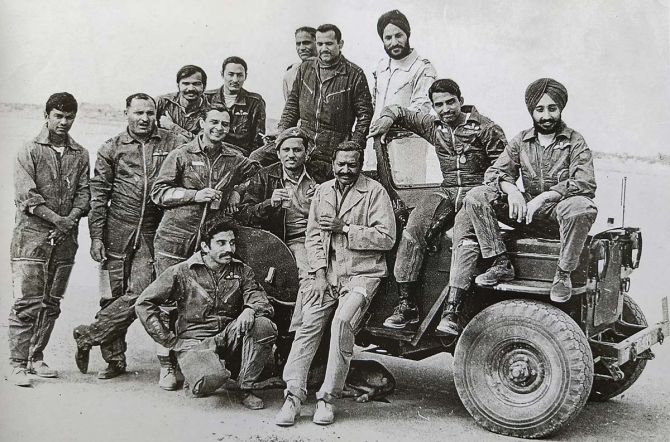 Mahindra Jeeps have been beloved by the Indian Army.

This is the 'historic image of some of the greatest IAF pilots perched on the Mahindra CJ-3B at the Uttariai airbase near Barmer in Rajasthan during a lull in operations against Pakistan during the 1971 War,' says Darukhanawala in Timeless Mahindra.

'These are not just a load of Vir Chakra winners in there but men who shot down many Pakistan Air Force fighter jets in combat and also some of the brilliant ground crew who kept their aircraft in fine fettle.

'These include Brian Demagrey; Joe Bakshi, Vir Chakra recipient; the only pilot to shoot down a F-86 Sabre while flying a HAL HF-24 Marut, Bobby Kasbekar; Ranjit 'Jit' Dhavan, commanding officer 220 Squadron (HF-24 Marut), who destroyed several enemy tanks and railway installations in Pakistan; Samar Bikram Shah, Vir Chakra awardee, who is credited with shooting down an F-86 Sabre over enemy territory; ground engineer Mathur; Arun 'Buzz' Dutta who shot down a F-104 Starfighter; Iqbal Singh Bindra, who was awarded the Vir Chakra for shooting down an F-104 starfighter over the Uttarlai air base itself!

'Crouching down near the rear wheel is Sudhir Batra, while sitting in the CJ-3B are V K 'Murph' Krishnamurthy, base commander, Uttarlai; and A K 'Aggi' Aggarwal, commanding offficer, 10 Squadron (HF-24).

'Perched on the bonnet are Sharma and Mukhjinder Singh. 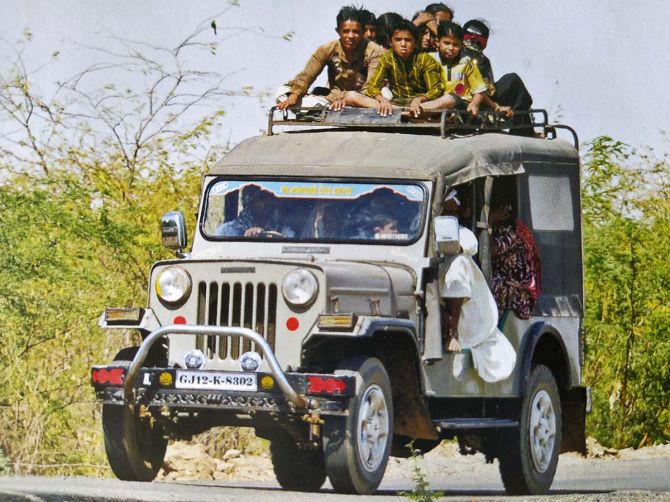 The Mahindra Commander above might have been classified as a 10- or 11-seater but has carried three to four times that number, as seen in this picture taken in the Kutch, Gujarat. And, of course, how can one forget that the Mahindra Jeep has starred in many of our films? Here's one example :) 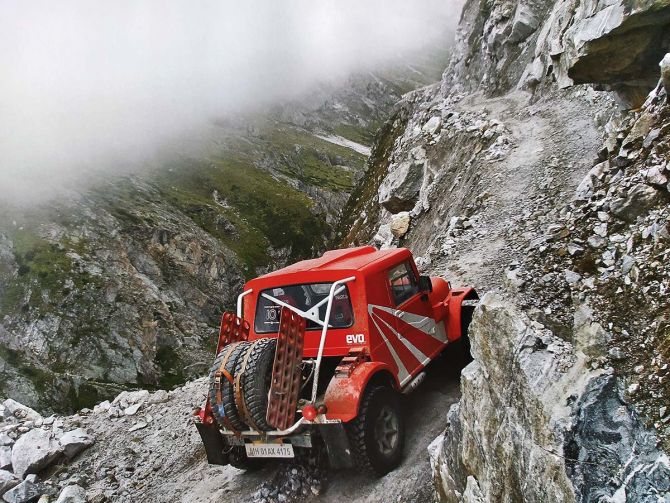 Then came the adventurers. The Super Thar, seen here in its element. 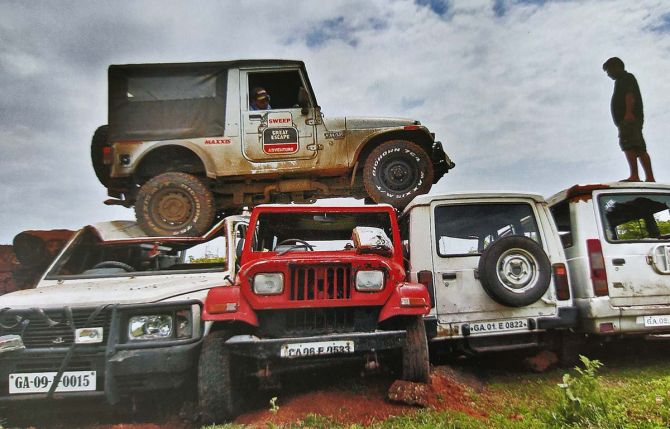 The Jeep's adventures were not bound by rules and boundaries.

The Mahindra Adventure team has taken them across countries on road trips that have started from India and still do.

Darukhanawala says, 'The Mahindra Adventure training academy at Igatpuri (Maharashtra)... is a source of new experiences for on-road drivers'. Seen above, a driver in a Mahindra Thar attempts one of the obstacles at the academy. 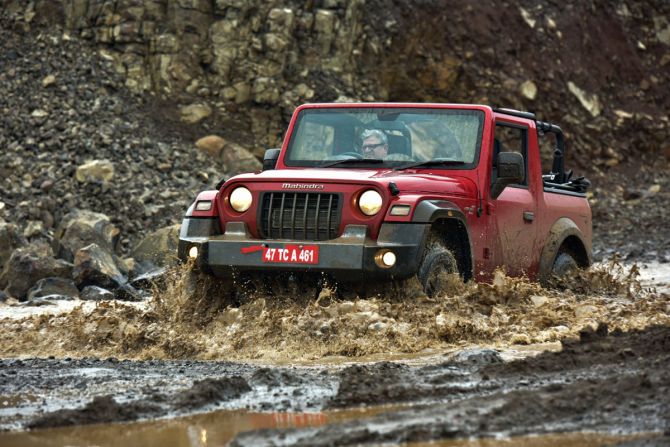 And there's Darukhanawala himself in the all-new Thar.

For all those who thought Mahindra have only been manufacturing Jeeps and trucks in the '90s, the book offers interesting surprises. Timeless Mahindra is a must-read for all auto enthusiasts. 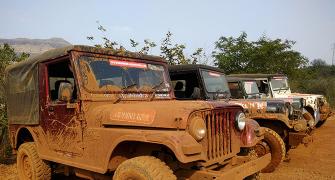 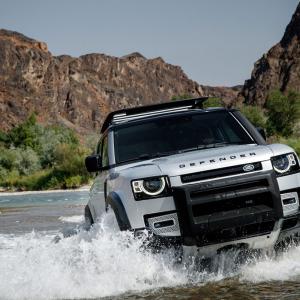