It used to be said that in times of financial crisis, women wore a brighter shade of lipstick, men invested in diamonds and the wealthy collected art.

Covid masks have put paid to the lipstick, diamonds have been replaced by gold, according to analysts, and as for art -- it's doing quite well, thank you, never mind the roil in the luxury market.

When 10-year-old Amrita Sher-Gil drew a stag on a sheet of paper, she could not have known some fond collector would pay Rs 16 lakh for it, or bid Rs 87 lakh for a charcoal sketch of a woman's head -- extraordinary prices for drawings in India.

But with people spending more time at home than before, art seems to have caught their eye, and an increasing number don't seem averse to spending big bucks chasing works at auctions that they may not have had the time for earlier.

These prices are, predictably, the tip of the iceberg in a market that had a case of the jitters in the early months of the public health emergency that saw it cancelling auctions and exhibitions in anticipation of dwindling sales -- choosing caution over recklessness.

It began to test the ground with low-end offerings of no-reserve auctions and fixed-price sales that buyers were quick to snap up.

For auction houses, the challenge lay in acquiring property to trade with sellers who initially proved pessimistic.

Financial stress may have forced some to step reluctantly out, for it's no secret that top quality works remained away from the market, yet values have been handsomely returned.

Competitive chasing by buyers and a consequent hardening of prices has since increased the attractiveness for sellers and has proved a pointer to the investment value of art -- a facet the financial sector may want to acquaint itself with, having ignored it to its own detriment in the past.

That the Indian market is faring well is a tribute to its fundamental strength built up over the last decade, following its collapse in 2008-09 when inflated prices had brought it to its knees in the wake of the Lehman Brothers crash.

Recovery was slow but steady.

It is not just auction houses that are seeing values rise in the creamy layer.

Private sales have been doing equally well, a case in point being London's Grosvenor Gallery in which a painting by Goa's Laxman Pai was valued at Rs 35 lakh.

Such fixed-price sales have seen the emergence of artists whose names could become increasingly familiar, broadening the base for buyers to cherry-pick from.

Internationally, too, prices of masters at the top end are doing remarkably well, with several records being broken.

Just last month, a painting by Roy Lichtenstein fetched almost Rs 350 crore (yes, that's for a single painting), while works by Pablo Picasso, Joan Miro, Barnett Newman and others were snapped up at values of Rs 200 crore and higher.

It hasn't been easy sailing for everyone though, with smaller galleries lacking financial muscle and folding up, while auction houses have seen a drop in the quantum of their sales.

How that market will bounce back is anyone's guess for now when all of the action appears to have shifted online, extending the reach for both buyer and seller.

That both believe this is the right moment for them can only mean Indian art has finally found a niche above the roller-coaster of the marketplace -- lipsticks be damned. 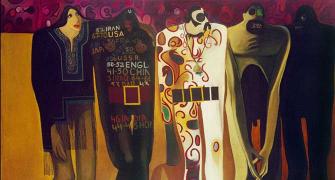 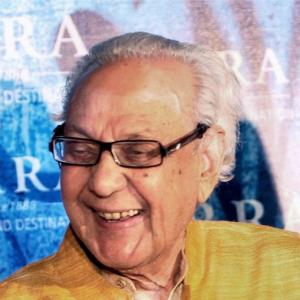