Next
Manojit Saha and Somasroy Chakraborty in Mumbai and Kolkata

Many big foreign banks, including Citibank, Standard Chartered and Hong Kong and Shanghai Banking Corporation (HSBC), may not get unfettered branch access in India, even if they opt for the wholly-owned subsidiary route.

This is because the countries where these lenders are headquartered have set stiff rules for branch expansion by foreign players.

So, when these lenders look to expand footprint here, the ‘reciprocity’ clause - one of the cardinal principles in the latest guidelines, released by the Reserve Bank of India (RBI) earlier this month - could prove a major hurdle.

This means creating subsidiaries in India may not necessarily ensure near-national treatment in branch expansion for all foreign banks. 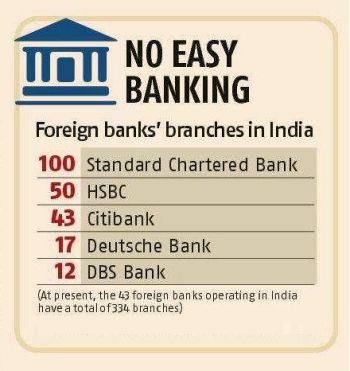 The reciprocity principle in the RBI norms on subsidiarisation for foreign banks in the country meant that overseas lenders would be given near-national treatment here only if their home countries allowed Indian lenders to open branches without much restriction, people familiar with the development said.

The chief of an Indian private bank said the reciprocity clause should be strictly followed in the interest of fairness.

“We face immense hurdles in opening branches abroad, despite giving a lot of elbow room to banks of those countries when they operate in India. A level playing field is a must,” the banker said.

According to sources, banks from the US and some European countries might find it difficult to increase the number of their branches in India as a result of the clause. 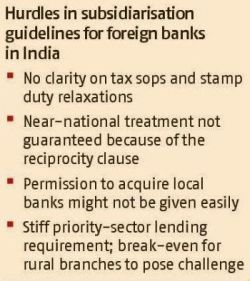 “Most countries are protective of their banking systems and do not easily allow foreign players to expand their presence rapidly,” said a senior banker with a mid-sized European bank in India, asking not to be named.

It will be more difficult for the foreign banks (from countries that do not have reciprocity arrangements with India) that started operations here after August 2010 or are planning to enter the country now.

These lenders would have to create wholly-owned subsidiaries to do banking business in India, though they might not be given near-national treatment in branch expansion. That could prompt a few lenders to exit the country, bankers said.

RBI has not made subsidiarisation mandatory for foreign banks that started business in India before August 2010. But, according to the new norms, lenders commencing banking business in India after this date would now have to convert their branches into subsidiaries.

“I don’t think many foreign banks will be keen to set up subsidiaries here, unless they are allowed to start branches freely. If branch expansion gets restricted due to the reciprocity clause, there is no point creating a subsidiary. We will wait for more clarity from RBI before taking a decision,” said a senior executive of another foreign bank present in India.

Bankers feel trade treaties between India and other countries might offer a solution to the issue.

For instance, India and Singapore signed a comprehensive economic cooperation agreement in August 2005. Following that, RBI and the Monetary Authority of Singapore opened up the financial sectors of their respective countries.

In the past five years, DBS’ branch count in India has increased from two to 12. RBI also allowed Singapore’s United Overseas Bank to commence banking business in India.

The Monetary Authority of Singapore, on the other hand, offered ‘qualifying full bank’ status to State Bank of India (SBI), permitting the state-run lender to mobilise retail deposits and open up to 25 centres in Singapore.