RBI in its policy review last month kept interest rates unchanged and said it sees an upside risk to inflation. "The annual rate of inflation, based on monthly WPI, stood at (0.16 per cent) (provisional) for the month of August, 2020 (over August, 2019) as compared to 1.17 per cent during the corresponding month of the previous year," the commerce and industry ministry said in a statement on Monday.

Inflation in food articles during August stood at 3.84 per cent.

The rate of rise in potato prices stood at 82.93 per cent. 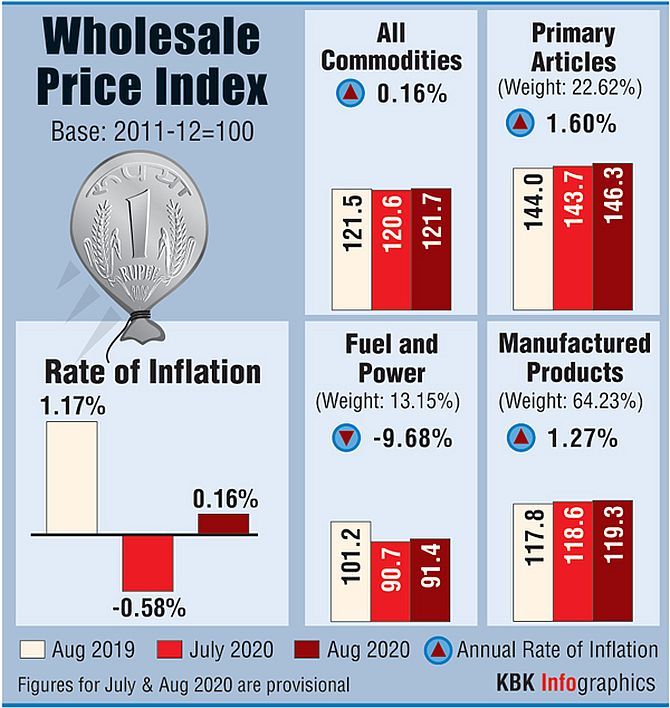 Fuel and power inflation fell 9.68 per cent in August, as against 9.84 per cent in the previous month.

Manufactured products, however, witnessed hardening of inflation at 1.27 per cent in August against 0.51 per cent in July.

The Reserve Bank of India (RBI) in its policy review last month kept interest rates unchanged and said it sees an upside risk to inflation.

The apex bank projected retention of inflation to moderate in October-March period.

Source: PTI© Copyright 2020 PTI. All rights reserved. Republication or redistribution of PTI content, including by framing or similar means, is expressly prohibited without the prior written consent.
Related News: WPI, Reserve Bank of India, Rupak De, Reuters
SHARE THIS STORY
Print this article