When V G Siddhartha refused all trappings of reflected power

When word got around in the ministry of external affairs that Siddhartha and Malavika were going to New York and would be with SM Krishna, protocol officers went to Delhi airport to see off the couple.

Siddhartha chided them for doing so and when the officials said a government vehicle would be picking them up at John F Kennedy airport on arrival, he told them that he would take a taxi to reach the New York Palace hotel where his father-in-law was staying. K P Nayar reports. 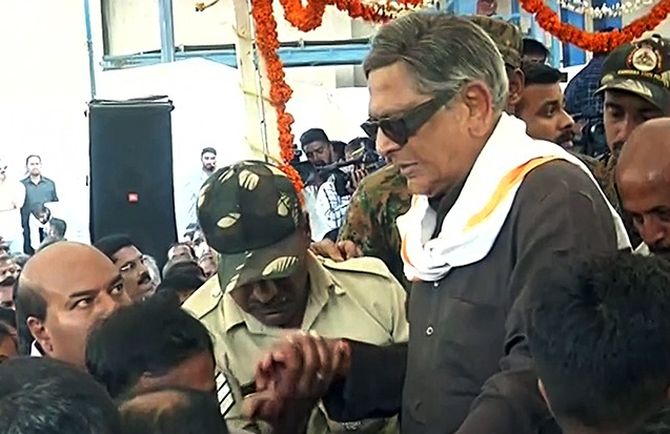 V G Siddhartha was one VIP with high political connections who abjured India’s notorious VIP culture. Once he was visiting New York along with his wife Malavika on holiday. Their visit coincided with the presence in Manhattan of Malavika’s father, S M Krishna, who was then India’s external affairs minister.

Prime Minister Manmohan Singh had decided that year not to attend the United Nations General Assembly owing to preoccupations at home. So automatically Krishna became the head of the Indian delegation to the General Assembly, which gave him the notional status of head of state or government under UN protocol.

Traffic in Manhattan is a nightmare during the third and last week of September when an average of 100 heads of state or government, including the American president, land up for the “general debate” which marks the start of the General Assembly every year. But as head of delegation, Krishna could sail through New York streets with outriders and other security detail and all traffic would be stopped to let the External Affairs Minister’s cavalcade pass unimpeded.

In order to make their passage easier, Krishna used to ask Siddhartha and his wife to travel with him in the custom-secured SUV provided by the government. One day the son-in-law wanted to go to the UN to watch the external affairs minister address the General Assembly. Not only on this occasion, but invariably, Siddhartha preferred to walk to such venues and refused all trappings of his reflected power.

When word got around in the ministry of external affairs that Siddhartha and Malavika were going to New York and would be with Krishna, protocol officers went to Delhi airport to see off the couple. Siddhartha chided them for doing so and when the officials said a government vehicle would be picking them up at John F Kennedy airport on arrival, he told them that he would take a taxi to reach the New York Palace hotel where his father-in-law was staying.

At the New York Palace hotel, a suite larger than most Manhattan apartments, complete with a living room, dining area and a conference room, in addition to one bedroom and another with a connecting door, is normally reserved for the head of the Indian delegation. Needless to say, Siddhartha and Malavika booked their stay elsewhere in the city.

Siddhartha’s innate sense of humour stood those he associated with in good stead even in adversity. Krishna became a teetotaler the day he was sworn in Karnataka Chief Minister in 1999 and remained so for more than a decade. One of the worst days of Krishna’s public life was when he read another foreign minister’s speech in the UN Security Council. He was lampooned in the media and the Pakistanis at the UN went to town over the Indian minister’s gaffe.

That night, a very upset Krishna went to the iconic Smith and Wollensky restaurant, a walking distance from the UN, and got off the wagon, ordering a large Oban 14 single malt, which was his old favourite. After the dinner, he called his son-in-law to tell him that he had a drink after 10 years. Siddhartha’s reply was that he hoped it was Black Russian or Kahlúa: both have coffee as ingredients. At the end of a bad day, Krishna laughed about his son-in-law’s passion for coffee.

That passion was evident the moment Siddhartha came to know that this writer has family connections in Slovakia. Cafe Coffee Day had already made a roaring success of two its four outlets in Austria. Building on that success it ventured into Czech Republic where it opened nine cafes.

But Slovakia, a smaller and much more competitive market, was turning out to be a bigger challenge. Yet, Siddhartha was determined to enter the Bratislava café scene, especially because there was no restaurant in the city which did justice to Indian cuisine despite the fascination of urban Slovaks to everything Indian. In the end, Cafe Coffee Day was frustrated in these efforts because of Bratislava’s high real estate costs owing to its proximity to Vienna.

When Cafe Coffee Day’s first outlet opened near the University of Vienna, Siddhartha told this writer that he modelled it on the success of the Indian Tea Board’s tea room in Cairo which became a leading hangout for Cairo University students in the 1980s. Cafe Coffee Day’s daring foray into this market with its unalloyed loyalty to Austrian coffee and Sachertorte is probably the only example of an Indian company successfully selling coal in Newcastle, proverbially speaking.

K P Nayar was a resident correspondent at the UN in New York when the events described in this article took place.