US hopes India, China and Brazil will help conclude Doha round

Asserting that the United States is engaged in trying to pursue an ambitious agreement for the Doha Round, a top White House official on Monday hoped that major trading partners like China, India and Brazil will help successfully conclude the Doha round of trade negotiations. 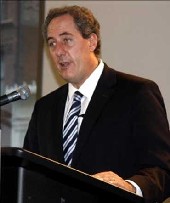 The United States, he said, believes that it is important that the Doha Round creates meaningful market access if it is going to be successful.

"That's what we're focusing on right now and we hope that our major trading partners, including China, India, Brazil, will come to the table with a similar approach and a similar attitude with the objective of creating a strong agreement," Froman said in response to a question.

Even though, it was not an APEC-specific area of work, it will be very much on the minds of the leaders.

There will be a Trade Ministers' meeting or Ministers Responsible for Trade meeting at the end of May in Big Sky in Montana, where Doha will also be one of the central issues discussed, he said.

Lalit K Jha in Washington
Source: PTI© Copyright 2021 PTI. All rights reserved. Republication or redistribution of PTI content, including by framing or similar means, is expressly prohibited without the prior written consent.
Related News: Doha Round, United States, Mike Froman, Brazil, China
SHARE THIS STORY
Print this article
I am Marxist, China is capitalist-communist, says Dalai Lama
No possibility of concluding Doha Round this year
Ronaldo to play farewell Brazil match in June India most open to talks on Doha round: Kirk