Unspent PM-KISAN fund may be diverted to MGNREGA

Though, all of the PM-KISAN savings may not be transferred to fund MNGREGA’s extra needs, sources said a part of this could be transferred. 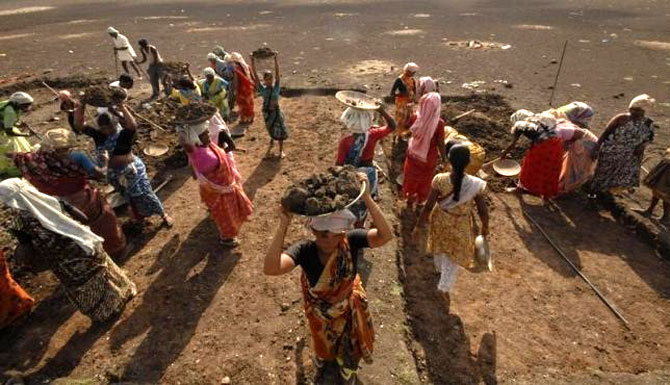 To push liquidity into rural hands to kick-start the consumption cycle, the government may divert a part of the unspent fund allocated under PM-KISAN scheme for 2019-20 to the Mahatma Gandhi National Rural Employment Guarantee Act (MGNREGA).

Officials said because of the lower number of targeted beneficiaries under PM-KISAN expected this year than anticipated earlier based on the 2015-16 agriculture census, the Centre may end up saving Rs 20,000-25,000 crore in the flagship scheme, out of the budgeted Rs 75,000 crore.

“A part of this may be diverted for MGNREGA,” a senior official said.

Though, all of the PM-KISAN savings may not be transferred to fund MNGREGA’s extra needs, sources said a part of this could be transferred.

“A fund for MGNREGA might be through the supplementary demand for grants.

"The idea is to put more money into rural hands in the short run. It is the most effective way to boost demand and consumption,” the official quoted above added.

Officials said extra funds for MGNREGA could be used to meet extra demand (which may increase after the rabi sowing) or to increase wages.

This is almost Rs 4,629.61 crore more compared to the same period last year.

Officials who spoke to Business Standard made it clear that the Centre’s rural budget will not be cut back to help meet a challenging fiscal deficit target for 2019-20.

In PM-KISAN, the Centre had allocated Rs 75,000 crore for 2019-20 based on the assumption that around 145 million farmers will get enrolled into the scheme.

But, sources said so far over 76 million farmers have got enrolled under the scheme.

“At best, this number will go upto to 100-110 million farmers by end of 2019-20 because in many places, farmers don’t have proper land records, while in some cases, states haven’t come forward to enlist their farmers,” a senior official said.

Under the scheme, arrears aren’t paid to farmers who couldn’t register on time.

Why govt wants to classifying jobs based on skills