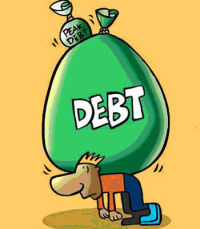 Almost a third of loans that banks have given to microfinance institutions have been admitted for restructuring.

This follows the inability of MFIs to repay.

The Reserve Bank of India, which has allowed banks to recast the debt of MFIs without lowering the asset quality - as a one-time measure - had earlier extended the restructuring deadline from March to June.

Microfinance companies have been facing a crisis after a crackdown by the Andhra Pradesh government last year in response to allegations they were charging high rates and using coercive recovery practices.

This has led to a steep fall in their collections. The state accounts for a third of the microfinance loan market.

The outstanding loans given by banks and Small Industries Development Bank of India to microfinance companies were Rs. 13,800 crore as on March 2010, according to the Malegam Committee report.

The committee was set up by RBI to study the issues the sector was facing. In addition, banks hold securitised paper worth Rs. 4,200 crore (Rs. 42 billion).

"After March 2010, when the sector was at its peak, the outstanding loans were close to Rs. 25,000 crore (Rs. 250 billion). There has been no fresh lending to the sector since October and microfinance companies have been repaying some of these loans," said Alok Prasad, chief executive officer of the Microfinance Institutions Network, indicating that the outstanding loans to MFIs have not risen significantly over the last one year.

MFIN is the industry body for microfinance companies.

"So, the current outstanding will be close to the March 2010 level," he said.

The loans of India's largest micro lender, SKS Microfinance, and Bhartiya Samruddhi Finance were also considered for restructuring. However, the two opted out, saying they had enough liquidity.

Analysts and industry players said debt recast appeared the only option for micro lenders as banks and financial institutions continued to deny them fresh loans.

"We have not received fresh funding from banks since October. We have been running the business through collections from outside Andhra Pradesh, from states such as Maharashtra and Madhya Pradesh," said Puli Kishore Kumar, the promoter and chief executive officer of Trident Microfin.

"If the restructuring goes through, we will be able to run the business for at least one more year without raising more funds," he said.

Some analysts said SKS could opt out as it was able to securitise a part of its portfolio. SKS has securitised loans worth Rs. 610 crore (Rs. 6.1 billion) with some banks and a non-banking finance company.

The loans were rated PR1+(SO) by CARE Ratings. This means they carry a lower risk.

"SKS and Basix, being industry leaders, get a good rating. But it is not the same for the rest of us," said a senior official of a Hyderabad-based microfinance company.

Analysts, however, warn that loan restructuring alone will not solve the sector's problems.