The move by Trump is expected to hurt outsourcing companies majors here, such as TCS, Infosys and Wipro, which traditionally have used the H-1B visa programme to send engineers to work on projects at customer locations in America. 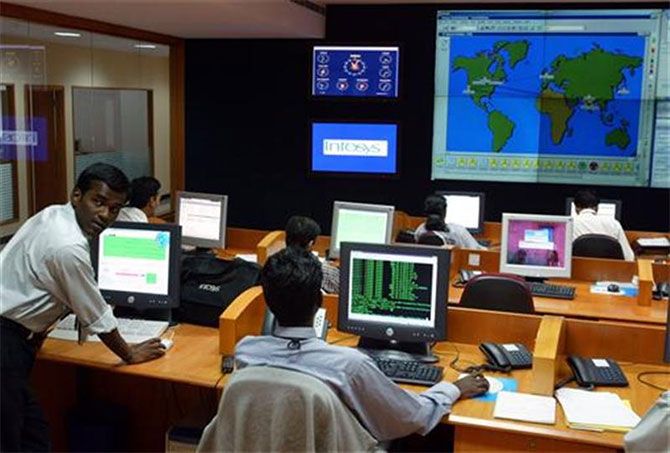 An executive order signed by US President Donald Trump on Wednesday (Indian time) to protect American industry, has also targeted Indian information technology services firms, who depend on H-1B visas to send engineers to work on projects to the US.

Trump has directed his top administration officials - the Secretaries of State, Labor and Homeland Security along with the Attorney General - to suggest reforms, so that the H-1B visas are given to the most skilled or highest paid beneficiaries.

The move by Trump will help Silicon Valley-based entities such as Google, Facebook and Oracle to take advantage of the programme to get more engineers from India to work on projects back home.

At the same time, it is expected to hurt outsourcing companies majors here, such as Tata Consultancy Services (TCS), Infosys and Wipro, which traditionally have used the H-1B visa programme to send engineers to work on projects at customer locations in America.

This has riled the National Association of Software and Services Companies (Nasscom), which says there is a campaign to discredit the Indian services sector and the move would hurt the American economy, as the US faces a shortage of computer engineers. It would benefit only Silicon Valley companies at the cost of the rest of America.

“Regarding the concept of reorienting the H-1B lottery to be a system that prioritises the “most-skilled or highest-paid” visa applicants, the (US) Administration needs to be careful about unintended consequences,” it stated.

“Using salary levels as the metric is not necessarily the best indicator of benefits to the US economy. And, unless such a system reflects variations in wages in all parts of the US, it could advantage certain regions such as Silicon Valley over other regions of the US.”

TCS, this country’s largest software exporter, says it has reduced the number of visas it has applied over the past few years, and has several local development centres in the US, hiring local engineers.

“We have to watch what the visa issues are. Are they going to be constraints for having the right people on projects? We have taken a view of this and our dependency on visas has been reducing. Our strategy is to move to a regime where our operating model should be visa-neutral,” says N G Subramaniam, chief operating officer at TCS.

Software major Infosys says it continues to invest in local communities in the US. And, to hire local engineers, train them and deploy on projects.

“It is our endeavour to help clients leverage the best US talent, together with the best global talent, to drive economic growth in the US, ensure the US continues to be at the forefront of innovation, and bring skills and education in the new technologies that will transform our world,” said Infosys.

The US has not changed the quota of 85,000 H-1B visas issued annually, which includes 20,000 visas for holders of a Master’s degree.

Nasscom says it has no problem with measures aimed at protecting American workers. However, such measures should be made applicable for all companies applying for short-term and high-skill visas, including H-1B, the lobby group said.

It maintains that the US faces a shortage of over a million computer science engineers and there are not enough graduates from American universities to fill the gap.

Analysts say the impact on Indian entities would not be immediate, even as they have reduced sending people on H-1B visas and instead look at local hiring in the US.

“Even before this latest executive order, it is clear that the Indian service provider industry was taking steps to reduce their dependency on H-1B, as reflected by the drop in overall applications for H-1B from 236,000 last year to 199,000 this year.

The majority of this reduction is thought to be the reduced number of applications that the service providers are submitting,” says Peter Bendor-Samuel, chief executive officer of Everest Group, a global information technology researcher.

Amid concerns over the US’ changed H-1B visa programme, India said on Wednesday it was in touch with the Trump Administration and making “full assessment” of its impact on Indian professionals.

External Affairs Ministry spokesman Gopal Baglay said India was also in touch with the Australian government regarding the changes in that country’s work visa programme.

“The government is in touch with the governments of the US and Australia on these matters and is also making full assessment of impact of these recent changes, in consultation with all stakeholders,” Baglay said.