Finance Minister Nirmala Sitharaman on Thursday reviewed the state of the economy, including stress in the financial sector, at the meeting of the Financial Stability and Development Council (FSDC). 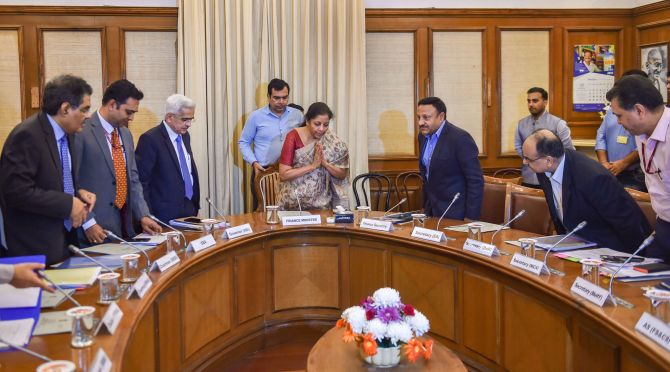 The 21st meeting of FSDC comes against the backdrop of the economy hitting a six-year low growth rate of 5 per cent in the first quarter of 2019-20. Even some of the macroeconomic data for the second quarter does not portray an encouraging picture of the economy.

Industrial output growth in August contracted by 1.1 per cent, after a gap of 26 months, reinforcing fears of a slowing economy and deteriorating consumer sentiment. The output of eight core infrastructure industries contracted by 5.2 per cent in September, indicating the severity of the economic slowdown.

"Broadly overall macro-economic issues and the state of the economy were discussed in details. There were some inter-regulatory issues which were also discussed. We also discussed about cybersecurity issues that were one important component of the discussion," Reserve Bank of India (RBI) governor Shaktikanta Das told reporters after the meeting.

Going forward, what kind of approach the regulators take on various issues particularly where there is inter-regulatory overlap were discussed, he said.

The current status of the NBFCs was also discussed, the RBI governor said, adding that there are a large number of NBFCs that are functioning well.

The RBI is very closely monitoring the top 50 NBFCs which represent roughly 75 per cent of the asset size of the NBFC sector.

"We are having regular interaction with the management of those NBFCs where we see any signs of vulnerability and whenever there is any vulnerable signs are visible, we are asking the management of the company to meet RBI and we asked them to take corrective steps through market mechanisms," he said.

The overall CRAR requirement for an NBFC is 15 per cent he said, adding, it is about 19.3 per cent for the sector overall.

This was the second meeting of the FSDC after the Modi 2.0 government assumed office.

Emerging out of the nearly two-hour meeting, Finance Secretary Rajiv Kumar said, "The meeting was very constructive and it took stock of entire financial system and other issues."

The RBI and other regulators are looking at it holistically, he said when asked about stress in the financial sector.

According to sources, the Financial Resolution and Deposit Insurance (FRDI) Bill was also discussed during the meeting.

The previous Narendra Modi government introduced the Bill but it could not be passed due to the controversial ‘bail-in' clause.

"The Council reviewed the current global and domestic macro-economic situation and financial stability and vulnerabilities issues, including inter-alia, those concerning NBFCs and Credit Rating Agencies," the finance ministry said in a statement.

The council reviewed the action taken by members on the decisions taken by FSDC earlier and held discussions on the proposals submitted for further strengthening of the resolution framework and framework for cybersecurity of the financial sector, it said.

It also took note of the activities undertaken by the FSDC sub-committee chaired by the governor, RBI, and the initiatives taken by the various regulators in the financial sector.