Key drivers of these risks can be arrested or reversed through building more inclusive societies, for which international cooperation and long-term thinking will be vital 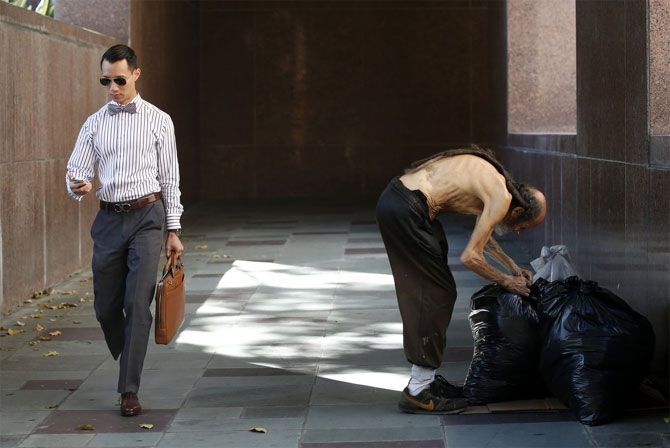 Economic inequality, societal polarisation and growing environmental dangers are the top risks facing the world over the next 10 years while India alone can see this year a staggering 93 per cent holding jobs without social security benefits, says a report.

"Trends such as rising income inequality and societal polarisation triggered political change in 2016 and could exacerbate global risks in 2017 if urgent action is not taken," the World Economic Forums (WEF) said in its Global Risks Report 2017 released in London on Wednesday.

The annual study further noted that key drivers of these risks can be arrested or reversed through building more inclusive societies, for which international cooperation and long-term thinking will be vital.

"Climate change ranks alongside income inequality and societal polarisation as a top trend for 2017, with all five environmental risks featuring for the first time among the most likely and most impactful risks before the world," it said.

The report, released by Geneva-based WEF days ahead of its annual Davos meet of the world's rich and powerful next week, also identified these dangers as the top three trends that will shape global developments for the next 10 years.

Collaborative action by world leaders will be urgently needed to avert further hardship and volatility in the coming decade, it added.

Regarding India, the report said the country has significant potential to reap a demographic dividend, but its limited capacity to create employment poses a serious challenge.

"Between 1991 and 2013 the size of the working-age population increased by 300 million, yet the number of employed only increased by 140 million. By 2017, a staggering 93 per cent of Indians will hold jobs without social security benefits.

Talking about 'rising nationalism' in various countries, WEF said civil society actors often challenge decision-makers on issues tied to security and identity, such as the response to terrorism or the refugee crisis, or the treatment of minorities.

"Nationalist sentiment has fuelled the closing of civic space in an attempt to reduce such criticism. The argument against foreign funding also has nationalistic undercurrents -- some non-governmental organisations that take foreign funding have been accused of being unpatriotic or anti-development," it said, while observing that such accusations have been made in several countries, including India, Pakistan, and Malawi.

Source: PTI© Copyright 2021 PTI. All rights reserved. Republication or redistribution of PTI content, including by framing or similar means, is expressly prohibited without the prior written consent.
Related News: WEF, India, Davos, Lucy, Reuters
SHARE THIS STORY
Print this article