As the government plans to take sector-specific steps to tackle the slump, Finance minister Nirmala Sitharaman will soon hold talks with representatives from various sectors to get and take steps so that the confidence of those sectors can be restored. As the government looks for ways to tackle the economic slowdown, Finance Minister Nirmala Sitharaman will meet representatives of various sectors over the coming days, following which the Centre is likely to announce sector-specific measures or interventions.

Following Monday’s meeting with heads of state-owned and private banks, Sitharaman will meet representatives of micro, small and medium enterprises on Tuesday, auto makers and component manufacturers on Wednesday, industry bodies on Thursday, representatives of the markets and investors on Friday, and home buyers and real estate developers on Sunday.

“I would first of all like to hear from each of these sectors. Like the bankers, they have their own set of challenges.

"The essential idea behind these meetings is to understand those challenges and fairly quickly after that come up with something which will help those sectors.

"We will get inputs from various sectors and take steps so that the confidence of those sectors can be restored,” Sitharaman told reporters after her meeting with bankers.

“The finance minister has decided to take review meetings and feedback sessions with various ministries and stakeholders.

"Tomorrow (Tuesday) we are meeting MSMEs, where we will be joined by the MSME minister Nitin Gadkari,” said finance secretary Rajiv Kumar.

In the other meetings too, ministers and bureaucrats of the relevant ministries will join.

Sitharaman said that her meeting with representatives of big investors as well as the securities markets would help her understand their concerns regarding the surcharge imposed on the rich, which also impacts foreign portfolio investors operating as trusts or associations of persons.

“I have made it absolutely clear that if there are FPIs who want to tell me something, I am quiet open to hearing out what they have to say.

"We have not just left it at that,” Sitharaman said, and added that economic affairs secretary Atanu Chakraborty will meet them separately, and she may attend that meeting as well.

In July, they had withdrawn a net amount of Rs 2,985.88 crore from the capital markets.

Sitharaman also said that “nothing more” had been done on the proposed issuance of sovereign bonds apart from the announcement in the Budget as the ministry was busy in dealing with three Bills, including amendment to the Insolvency and Bankruptcy Code (IBC).

“I know some numbers were floating around because the earlier secretary had mentioned it.

"I am not speculating on the tranches, numbers, amount, as nothing of that has been decided,” she said.

SBI chairman Rajnish Kumar said after the meeting that issues around credit growth were discussed extensively from various sectors of the economy, including real estate, non-banking financial companies or MSMEs.

When asked on his expectations from the Monetary Policy Committee meeting later this week, Kumar said: “I hope so. Everybody is expecting that (a rate cut). Everybody says 25 basis points. So I'll also say 25.”

In the meeting, banks also articulated some issues they have been facing in service tax, and these were taken note of by the revenue secretary and the chairman of the Central Board of Indirect Taxes and Customs, according to the official statement. 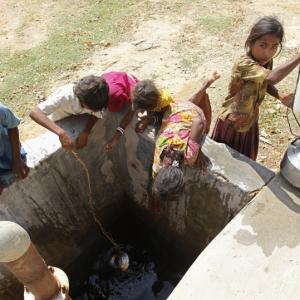