Central bank's annual report says only Rs 16,050 crore out of the Rs 15.44 lakh crore of the old high denomination notes have not returned. 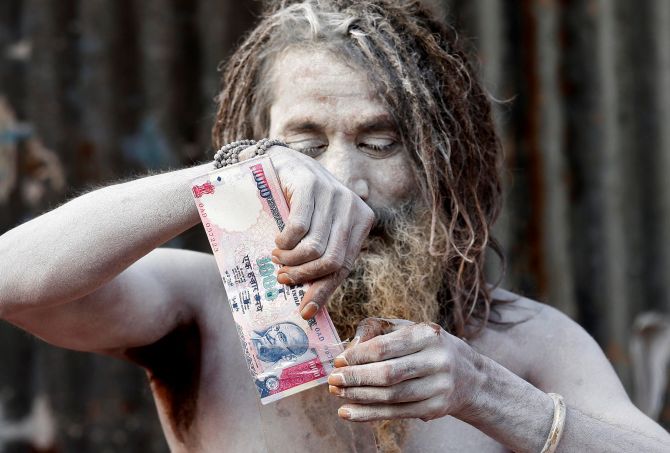 An astronomical Rs 15.28 lakh crore, or 99 per cent of the junked 500 and 1,000 rupee notes, have returned to the banking system, the Reserve Bank of India said on Wednesday, prompting the Opposition to question the efficacy of demonetisation in curbing black money.

The Reserve Bank, which has so far shied away from disclosing the actual number of junked currency deposited after the November 8, 2016, decision, said in its Annual Report for 2016-17 that only Rs 16,050 crore out of the Rs 15.44 lakh crore of the old high denomination notes have not returned.

While the counterfeit currency made up for a minuscule number, RBI post-demonetisation spent Rs 7,965 crore on printing new Rs 500 and Rs 2,000 and other denomination notes, more than double the Rs 3,421 crore spent in the previous year.

However, Union Finance Minister Arun Jaitley vehemently defended the note ban decision, which sucked out 86 per cent of the currency in circulation, curbed economic activity and put common man at much inconvenience, saying the move was not intended to confiscate money but to bring it into formal channels and tax them.

The move, he said, was aimed at flushing out black money, eliminating fake currency, striking at the root of terror financing, converting non-formal economy into formal one to expand tax base and employment and giving a big boost to digitisation of payments to make India a less-cash economy.

With the return of the money, the owners have been identified, he said, adding that the tax department is scrutinising 18 lakh bank accounts with unusual deposits post note ban that do not match with previous income profile.

To Chidambaram's criticism, he said 'people who had not taken a single step during their tenure against black money have not understood the intent behind demonetisation'.

'The government had expected all the specified bank notes (of old Rs 500 and Rs 1,000) to come back to the banking system to become effectively usable currency,' the finance ministry said in a statement.

While it was widely expected that those holding black money may not be able to deposit them in banks during the 50-day window provided, the RBI said just 8.9 crore pieces of Rs 1,000 notes or 1.3 per cent of the scrapped ones have not returned.

It, however, did not give a specific number for the old 500 rupee notes.

Samajwadi Party leader Naresh Agarwal said his party would move a privilege motion against RBI Governor Urjit Patel for 'misleading a parliamentary panel by not revealing the number of notes returned'.

Asked about the then attorney general Mukul Rohatgi's statement in the Supreme Court that the government had expected Rs 10 or 11 lakh crore to be returned, Jaitley said those were 'speculative' statements. 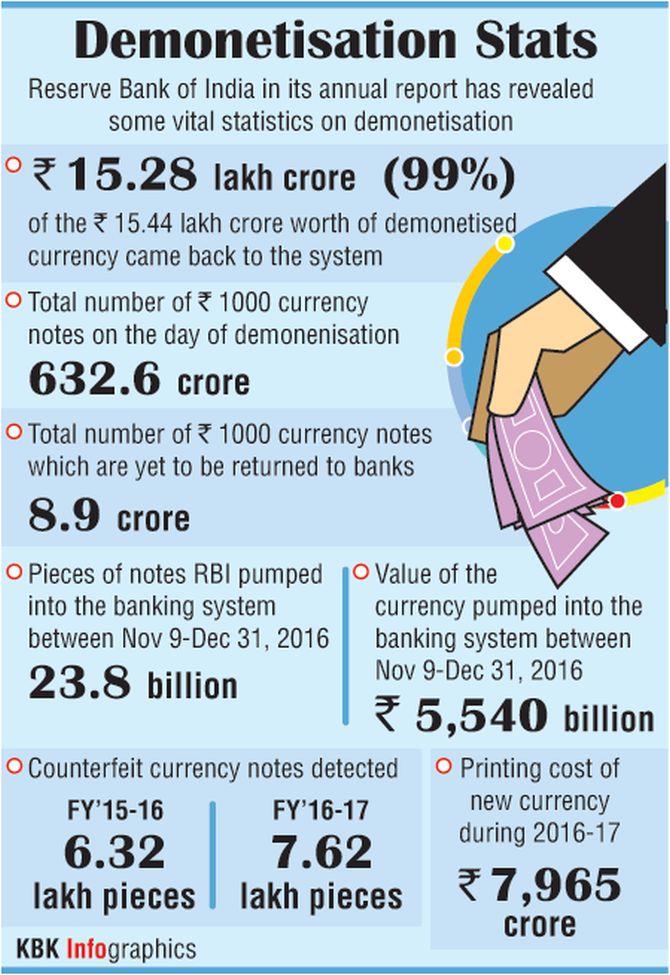 "Subject to future corrections based on verification process when completed, the estimated value of specified bank notes received as on June 30, 2017, is Rs 15.28 trillion," the central bank said.

After the note ban, old notes were allowed to be deposited in banks, with unusual deposits coming under income tax scrutiny.

A collateral damage as a result of rise in printing and other cost was dividend the RBI paid to the government.

The government replaced old Rs 500 notes with new ones, but no replacement for Rs 1,000 notes has been made.

Instead, a new Rs 2,000 note was introduced post cash recall.

Former RBI deputy governor R Gandhi is of the view that demonetisation will have a long-term impact, saying expectations of various quarters that sizeable portion of the demonetised currency will not return have not been fulfilled.

While stating that Rs 15.28 lakh crore have already come back, the RBI said the government has allowed District Central Cooperative Banks (DCCBs) to deposit the scrapped notes accepted by them from their customers during November 10-14.

Also, the RBI is in discussions with the government on acceptance or otherwise of those notes held by citizens and financial institutions in Nepal.

The report further said that during 2016-17, the number of suspicious transaction reports filed by banks and other financial intermediaries with the Financial Intelligence Unit 'witnessed a quantum jump'.

Banks, financial institutions and intermediaries reported as many as 4.73 lakh suspicious transactions in 2016-17 compared to about 1.06 lakh in the previous year.

The trail of deposits of the scrapped notes into bank accounts may provide valuable information to the revenue authorities in tracing unaccounted money, it added.

Source: PTI© Copyright 2020 PTI. All rights reserved. Republication or redistribution of PTI content, including by framing or similar means, is expressly prohibited without the prior written consent.
Related News: Reserve Bank of India, Rupak De, Reuters
SHARE THIS STORY
Print this article 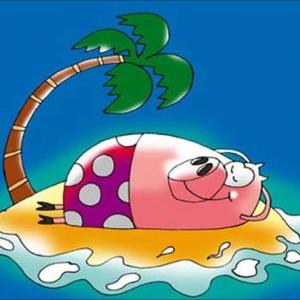