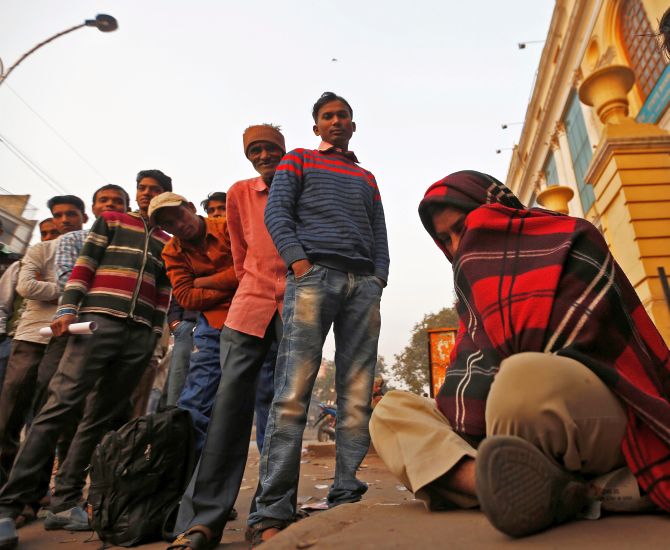 'If errors of judgement have been made, there should be no shame in admitting these.'
'Correct the wrong done immediately.'
'The janata will love the government for admitting its mistake,' Shatrughan Sinha tells Subhash K Jha.

The Bharatiya Janata Party's most vocal and, dare one say, fearless leader, Shatrughan Sinha, has done it again.

A tweet on Prime Minister Narendra Modi's demonetisation move by Sinha had to be deleted after it caused an uproar within party circles.

But the veteran actor and Bihar's son of the soil remains unapologetic.

"I stand by what I said. I had to delete the tweet as it was being construed as a criticism of our beloved and much revered prime minister, the super hero Narendra Modiji." says the MP from Patna.

"How many times have I said this? And I say it again. Criticising a party decision -- and that's what I am doing again -- is not a criticism of the prime minister. I maintain the demonetisation policy was well-intended, but very badly executed," he adds.

"It seems like a decision implemented in josh (haste) rather than hosh (deliberation)."

Sinha's heart bleeds for the hardships demonetisation has caused the common man.

"Forget black money, the working class is being denied access to its hard-earned money. You are saying you will get only Rs 2.5 lakhs to conduct a wedding. What can be done with that measly amount of money? Even a decent meal for the baraati (wedding party) costs more. This is not right."

"It is easy to say the common man is willing to suffer for the sake of the larger good. But where is the larger good? As a very learned economist said, the Rs 2,000 note may solve the problem of space crunch, but how will it quell the financial crunch?"

"People are making jokes about the pink colour of the 2,000 rupee note coming off in their pockets, thereby sparing them the cost of buying colour during Holi. But I don't think this is a joking matter. Today it's the Rs 500 and Rs 1,000 denomination that is being discontinued. What if tomorrow the new Rs 2,000 and the new Rs 500 notes are demonetised?"

"The scariest part of this hastily implemented decision is that people have lost faith in the government and in the banking service. Today, for the first time in a very long time, the Opposition is united, thanks to demonetisation. And for once what they are saying makes sense."

"Our honourable Prime Minister Narendra Modiji has been let down by his learned advisors. They have allowed him to act in haste. Now there are attempts to roll back the decision. A case of too little, too late."

But all, according to Sinha, is not lost.

"Modiji should immediately form a high-powered committee of BJP stalwarts like L K Advaniji, Murli Manoharji, Subramanam Swamyji, Arun Shourieji. The committee should include a top-notch lawyer. It's time to look at demonetisation calmly and sensibly."

"If errors of judgement have been made, there should be no shame in admitting these. I maintain the prime minister's decision of demonetisation was well-intended. Its implementation has left much to be desired. Correct the wrong done immediately. The janata will love the government for admitting its mistake."

IMAGE: A queue outside a bank in the early hours of the morning in New Delhi. Photograph: Adnan Abidi/Reuters 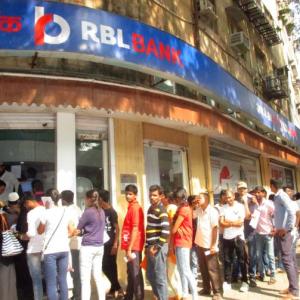