Some Railway zones, faced with loss of traffic due to the lockdown, are planning an austerity drive that could include hiring freeze, merging of job categories, and curtailment of certain allowances for some section of the employees.

According to persons close to the development, zones like the West Central Railway (WCR) have initiated such measures to reduce the expenses on infrastructure works and employee cost.

In a recent meeting, WCR came out with a plan to have no further recruitment of Group D staff.

“Cadres like parcel porters, cleaners will be retired, while passenger reservation system is likely to be minimal in all big cities,” said a person in the know.

Some zones are planning curtailment of allowances admissible to the operational staff of the Indian Railways such as Kilometerage Allowance and night duty allowance.

The Railways did not respond to queries sent on these measures.

Since passenger services were shut since March 22, passenger revenue is not coming.

Besides, there are plans for rationalisation of crew changing points, with zero based revised time table, parcel and goods trains and also with less traction change post electrification.

The Railways plans to keep non-travelers out of stations so the requirement for cleaning will be less.

“There will be strict check on unauthorised entry on platforms.

"The ticket-checking cadre will be strengthened by redeployment of surplus manpower to other departments," he added.

After passenger services were stopped, earnings for March dropped 62.36 per cent.

Starting from May 1, the Railways started Shramik Special trains to move migrant workers, pilgrims, tourists, students and other persons stranded at different places due to the lockdown.

It has run more than 1,000 such Shram Shakti trains in less than 15 days. Currently, both Shramik Special and other special trains are being run. The Railways have so far run 1,300 special trains with more than 1.7 million people. 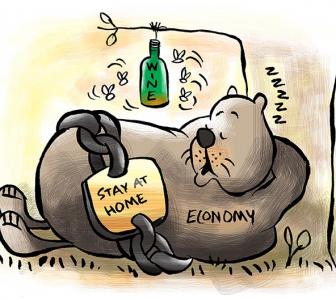