Factories are shutting down owing to a shortage of labour and raw materials, and a lack of logistical support amid the ongoing nationwide lockdown against the coronavirus pandemic. 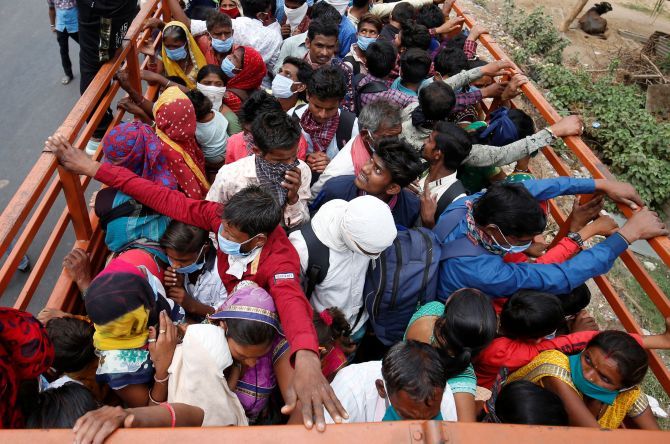 IMAGE: Migrant workers and their families board a truck to return to their villages after India ordered a 21-day nationwide lockdown to limit the spreading of coronavirus disease, in Ahmedabad. Photograph: Amit Dave / Reuters.

Manufacturing in key sectors in the country has virtually stopped, with more and more companies announcing that they are shutting down their factories owing to a shortage of labour and raw materials, and a lack of logistical support amid the ongoing nationwide lockdown.

The lockdown, aimed at containing the spread of the coronavirus pandemic, is also impacting their plants overseas.

The Aditya Birla group-owned Hindalco announced that it had temporarily shut down or scaled down operations at some of its aluminium and copper manufacturing facilities in line with the government’s directives. Operations are being managed with minimal staff as part of the effort to practise social distancing, it said.

In the US, Hindalco’s subsidiary, Novelis, has also partially shut down some of its plants as a result of the temporary shutdown measures of US automakers in response to the covid-19 crisis. Aditya Birla group’s Grasim and UltraTech also said some of their plants were closed following the government orders.

While Novelis has temporarily ramped down aluminium supply for the automotive market during this period, it will continue to produce aluminium for the beverage can and specialty markets, Hindalco said. Similarly, Jindal Stainless said its manufacturing facility at Jajpur, Odisha, had been closed with immediate effect.

Universal Cables announced that operations at its manufacturing units in Satna had been temporarily suspended with effect from the midnight of March 24, and from the morning of March 22 at the Goa unit.

Among MNCs, P&G Health said due to the lockdown orders issued by the central and state governments, its operations had been disrupted across different sites, facilities, and distribution centres in India.

CEOs said the lockdown was hitting the supply of goods from one state to the other.

For instance, Emami Agrotech, part of the Emami group, has plants in Rajasthan, Andhra Pradesh, and West Bengal, and supplies edible oils to nearly all major markets in North and South India. On account of the lockdown, the Rajasthan and Andhra Pradesh governments have ordered Emami to shut down plants, leaving only West Bengal operational till somet ime back.

“The processing (in West Bengal) was on till some time back, but due to a shortage of labourers to pack products and the unavailability of trucks to despatch material, we are in the process of shutting it down,” said Aditya V Agarwal, director at the Emami group.

As trucks are being held up at the state borders, the scarcity of drivers within the state is limiting supplies to stockists and distributors.

“Even if I accept an order from a distributor, I will be facing major issues with logistics as truck drivers are not available. It is thus affecting cash flow as well,” a promoter of a consumer products firm said.

The situation is no better for core industries. A leading steel producer said, on average, the company needed 500 trucks. This has now come down to 20.

“Truckers don't want to go for long-haul as dhabas (roadside restaurants) are shut,” the steel company executive said. The plant has already cut production by 40-50 per cent on account of low demand from user industries and curtailed logistics.

On Tuesday, Steel Secretary Binoy Kumar wrote to the chief secretaries of all states that several steel plants across the country were facing problems with regard to the entry of workers, supply of raw materials, and despatch of finished steel.

The Essential Services Maintenance Act (ESMA) 1981 lists any service in any establishment or undertaking dealing with the production, supply and/or distribution of coal, power, steel or fertilisers as an essential service, Kumar pointed out in the letter.

He has requested that no restrictions be imposed on operations of steel plants (both integrated steel plants, as well as induction furnace or electric arc furnace based steel plants), entry-exit of workers, movement (both rail and road, as well as through waterways/sea) of raw materials (iron ore, coal, limestone, dolomite, ferro-alloys, scrap, sponge, iron ore etc) and intermediate or finished products to and from plants.

The cement sector too is staring at the suspension of operations owing to the dearth of workers and unavailability of trucks to ferry cement.

“There is no point storing cement at factories and dealers. Moreover, movement is affected as trucks are unavailable to ferry the cement,” said Sandip Ghose, chief operating officer at Birla Corporation.

Most cement companies have either stopped or are in the process of shutting down plants in the northern region, namely clusters in Rajasthan and Uttar Pradesh.

At Vedanta’s iron ore plant in Goa, all operations have been suspended, including the closure of its blast furnaces until March 31. 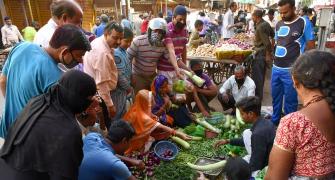 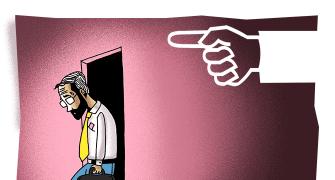 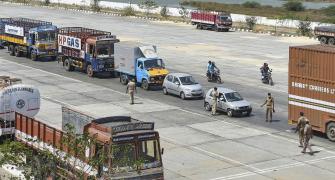 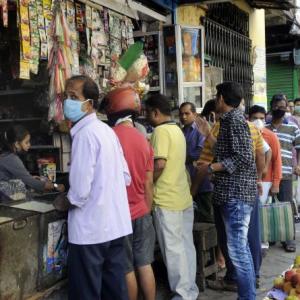