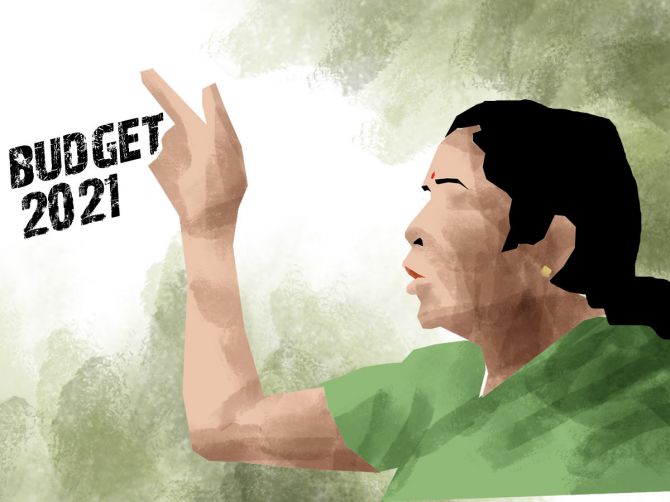 Markets have been on fire after Finance Minister Nirmala Sitharaman presented Budget proposals for fiscal 2021-22 (FY22) with the S&P BSE Sensex surging over 3,300 points in just two sessions.

Most brokerages have given a thumbs-up to the proposals, calling them ‘pro-growth’ that will entail a capex-driven revival of Covid-19 impacted Indian economy, even though fiscal deficit and the borrowing programme of the government for the next financial year came in a tad higher-than-expectation.

Divestment of select public sector banks (PSBs) and one general insurance company, initial public offer (IPO) of Life Insurance Corporation (LIC), Air India, tax rationalisation of dividends of foreign portfolio investors (FPIs) and bringing them at par with treaty rates coupled with no new taxes for investment in capital markets are some of the proposals that have propped up markets.

FY21 and FY22 fiscal deficit was significantly higher than expectation.

The underlying spending pace is projected to fall in FY22 despite robust capex spending – with a lower overall fiscal impulse to growth than in FY21.

The Budget was more positive for equities, less so for bonds given larger-than-expected supply and the slower pace of deficit normalisation.

The announcement of higher public sector capex is positive for infrastructure, cement and autos (L&T, UltraTech and Ashok Leyland).

The announcement of a 'bad bank' to address the stressed asset situation is positive but a lot will depend on the size and type of consideration (cash or security receipts).

Markets will like the overall stability of the tax regime.

With a long path to fiscal consolidation (at the central and state level), we think there is enough wriggle room for future years.

The government’s decision to accelerate spending, a volte-face from its earlier strategy, reflects its view of higher multiplier effects during the unlock phase and higher growth as a pre-condition for debt sustainability.

Revised targets suggest government spending will be frontloaded and rise by 55-60 per cent y-o-y in the final quarter of FY21 (January - March 2021).

At the margin, we believe rating agencies may view the budget as slightly more negative, given their focus on medium-term fiscal finances.

Of the two rating agencies with a negative outlook for India, we believe the budget may have increased the probability of a downgrade from Fitch.

Budget marks a clear change in the government’s stance from fiscal conservatism to growth orientation.

Fiscal deficit for FY22 is pegged at 6.8 per cent of GDP, about 150 basis points (bps) higher than street expectations.

Higher expenditure is geared towards capex.

Our view on cyclical recovery gets a further push.

Headline deficit higher than expected, but partly due to inclusion of extra-budgetary spending, partly due to conservative revenue expectations, and ambitious expenditure targets.

The GDP rebound expected in 2022 appears to be conservative, so also taxes.

Privatisation of two PSU Banks, one GIC in addition to IDBI is a good.

Fiscal deficit is higher-than-expected and will impact yields, but improved growth outlook likely to aid recovery in loan growth.

No material push was seen in terms of consumption in the budget.

However, we note from December 2020 quarter corporate earnings that consumption demand revival is progressing quite well, with high-double-digit volume growth footprints from many staples and discretionary companies.

We would have also liked to see more incentives/push for the Real Estate sector, which is showing early signs of recovery after a prolonged period of stagnation.

Overall, from an equity market perspective, we believe the budget, on balance, has turned out well, with no negatives on the taxation front and several long-term structural initiatives that augur well for medium-term growth.

From a business cycle standpoint, the fiscal stance is growth supportive and will help broaden the nascent recovery.

Also, the US is gearing up for third round of fiscal stimulus (Biden’s plan), which if comes through will have positive spillovers on emerging market (EM) economies including India, thus offsetting the need for big domestic fiscal push.

Overall, we believe, unlike past, tax revenue projections are quite conservative they may in fact overshoot.

We expected it to be a capex-oriented budget (in continuation of FY21) to be funded through divestments and asset monetisation – and that’s what it was.

Announcements on capex fail to enthuse us, but we are positively surprised by the cleaning up of finances past food and fertiliser subsidies, thus making fiscal deficits real albeit higher-than-estimated.

Revenue estimates are digestible and lack of any major taxation is heartening.

Many announcements on infra programs / funding / divestures to us are reiteration of things mentioned in the past; need to see all this executed.