The NCR and the MMR together account for 77 per cent of 10 big housing projects stuck because of developers' bankruptcy or litigation. 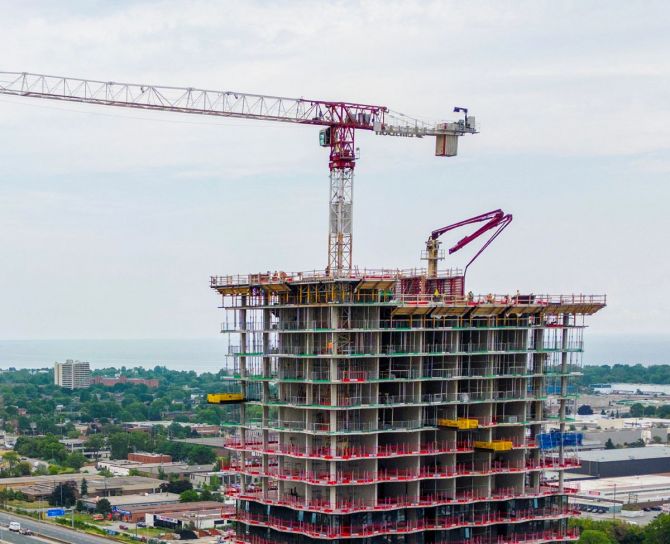 Kindly note the image has only been published for representational purposes. Photograph: Carlos Osorio/Reuters

Ten big housing projects, all in big cities, are stuck owing to reasons such as developers' bankruptcy or litigation, with the National Capital Region and Mumbai Metropolitan Region together accounting for 77 per cent of them.

Nearly 500,000 homes, worth Rs 4.48 trillion, were stuck in seven metro markets in the country as things stood at the end of May, according to Anarock Property Consultants.

Pune had a 9 per cent share of the delayed projects, and Kolkata 5 per cent, Anarock said. 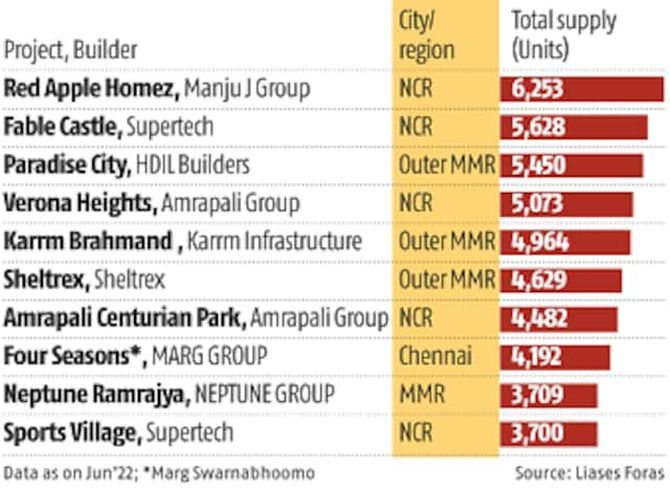 Here's a look at the top 10 stuck/stalled residential projects in the country on the basis of the supply of housing units, according to real estate research firm Liases Foras.

The uppermost on the list is Red Apple Homez in Raj Nagar Extension, Ghaziabad.

The project has 6,253 apartments and it started in September 2013 and is scheduled to be completed in June 2024.

The project is facing financial problems and is under litigation, Liases Foras said. Most of the property-selling portals say booking is on hold.

Second on the list is Fable Castle by Supertech in Sector 149, Greater Noida.

It was planned as a multi-storeyed residential project, but is yet to be launched because of litigation, said Liases Foras.

Some consultants say the project was later converted into a plotted development one but this could not be independently verified. It started in April 2013 and is supposed to be delivered in February 2024.

Recently, Supertech's twin towers were demolished in Noida upon the Supreme Court's orders.

Third on the list is Paradise City in Palghar West near Mumbai. It has 5,450 units, started in July 12, and supposed to be completed in April 2023.

It was being developed by HDIL, a Mumbai-based listed developer that is facing insolvency proceedings.

In 2019, the Mumbai police's Economic Offences Wing arrested the promoters of HDIL, Rakesh Wadhawan and his son Sarang Wadhawan, in a cheating case related to the scam at the Punjab & Maharashtra Cooperative Bank.

Next on the list is Verona Heights, Greater Noida, and was being developed by the Amrapali group, which has gone bankrupt. NBCC has since taken over the project and Anarock is marketing it.

The Supreme Court is overseeing the project now and has appointed a court receiver.

It started in September 2012 and was supposed to end in October 2023. About 5,073 units were there in the project to begin with. 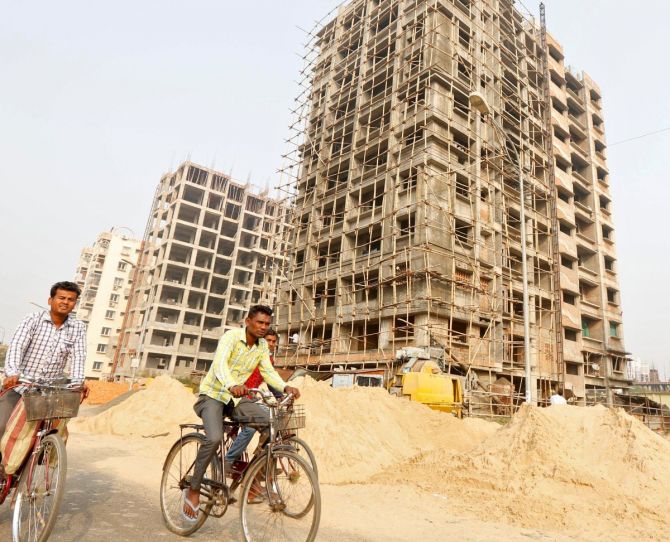 Around 40,000 homebuyers are stuck in various projects of the Amrapali group.

Next on the list is Karrm Brahmand in Palghar East, near Mumbai. The developer is Karrm Infrastructure and has 4,964 units. Its start date was March 2017 and is supposed to be completed by December 2025. Quoting the developer, Liases Foras said the project had not been launched.

Next is Sheltrex, which is building a 4,629-apartment project in Karjat near Mumbai. It started in January 2008 and is supposed to be completed by February 2024.

The project is under litigation, says Liases.

Amrapali Centurian Park in Greater Noida comes next with 4,482 units. Amrapali started it in January 2010 and is supposed to be completed by June 2023.

Now, NBCC has taken over the project.

Next is Marg Group's Four Seasons project in Chennai. It has 4,192 units. The project is under litigation, Liases said.

Neptune group's Ramrajya Property has 3,709 units. Though it started in April 2018 and is supposed to end in August next year, booking is on hold, said Liases Foras.

The bankers to the company have taken it to the NCLT.

Finally there is Supertech's Sports Village. It had been envisaged as a 100-acre township in Noida Extension but since it is under litigation, the project, which was supposed to start in January 2016 and finish in February 2024, did not begin, Liases Foras said, quoting the developer.

Some consultants say plots were launched in it, but this could not be independently verified.

"The most common thing in the stuck projects is funding. Banks give loans for three to four years. But the projects take seven to eight years. Before a project gets completed, repayment starts and then construction stops. In many cases money also gets diverted," said a senior private equity executive.

"Developers assumed the money would come from buyers. Homebuyers themselves did not give money during those times," he added.

The developers either did not respond to questions or could not be contacted. 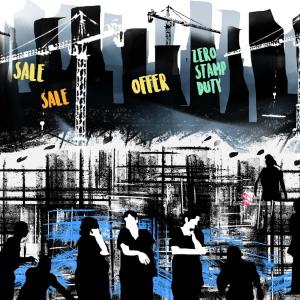 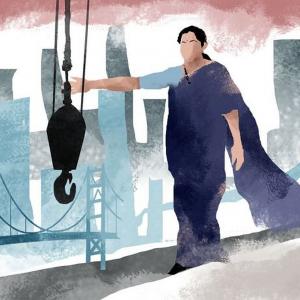