'India is strategically important and the biggest market outside China.

'It is the only market outside China, where we have built all types of set-ups - R&D centre, service centres, production lines and warehouses.' 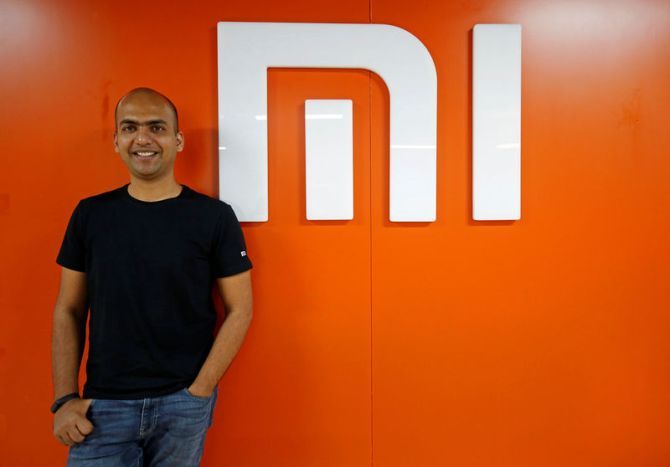 Xiaomi has expanded its dominance in the smartphone market by growing its share beyond 30 per cent in Q4 since it beat market leader Samsung in mid-2017.

Manu Kumar Jain, vice-president, Xiaomi, and managing director, Xiaomi India, shares his thoughts with Arnab Dutta on how the firm has put India on the forefront. Edited excerpts:

Why is your IPO prospectus flooded with mentions on India?

India is strategically important and the biggest market outside China.

It is the only market outside China, where we have built all types of set-ups - R&D centre, service centres, production lines and warehouses.

Starting from scratch, today we have three offices and are planning to open a fourth one.

Also, the learning from India will be crucial for our global expansion.

Where does Xiaomi stand in terms of local value addition?

We have begun sourcing printed circuit board assemblies (PCBAs) locally from our manufacturing partner Foxconn and are aiming to get 100 per cent of local demand from India by September.

The global suppliers' summit that was held here is unprecedented. We have asked the suppliers to set up component manufacturing units in India while our suppliers from China, Taiwan, Japan and Korea got a firsthand experience of the opportunities here.

The fleet of over 50 large-scale component suppliers attracted the attention of key policy makers, including ministers and bureaucrats from Uttar Pradesh and Andhra Pradesh.

Currently, some of the suppliers are in talks with the central and state governments to set up units in the country.

Potentially, they can bring in a few billion dollars of investments and an odd 20,000 jobs can be generated.

What is your immediate goal?

Our aim is to produce components locally.

While we have begun the process with PCBA, which forms 40-50 per cent of a smartphone's cost, camera modules, LCD panels, battery, among others, could be next in line.

Our biggest priority is to make sure to set up units of these 50 suppliers within the next two years.

The picture should be clearer after six months.

Jio Phone has affected the growth of smartphone market. Given India’s importance, how do you plan to overcome the barrier?

Yes, the feature phone market has exploded during the past few quarters due to Jio' entry and consequently the shares of the smartphones have fallen in the short term despite growing volume.

But it is a great opportunity. Jio Phone is bringing in new customers in the web universe, who, I believe will opt for smartphones in next one year or so.

From a long-term perspective, this is the best thing that can happen to the industry.

In the next four to five years, the size of the smartphone market will surpass 200 million a year.

According to IDC, we have almost tripled our volume uptake in 2017-18. Our revenue growth was also similar.

Rapid fluctuations of rupee-dollar exchange rate is a major concern.

We had to increase the price of our flagship TV model by 12.5 per cent.

Since, we work on a thin margin - less than 5 per cent in case of our products - we could not absorb the additional cost.

Going forward, if rupee depreciates further we may have to relook at our pricing.

Another pain point is the changes in import tax, which directly affects our business.

Surging crude oil prices also has the potential to affect costs as it puts pressure on the rupee -dollar ratio.

The cost of memory chips have gone up by double digit.